Fall season off to a good start 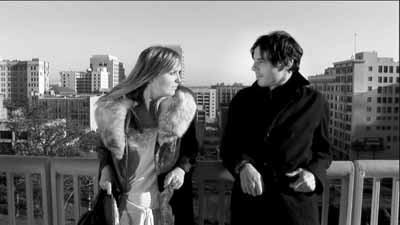 It's a great feeling, isn't it, falling in love with a movie about falling in love? That's the case with In Search of a Midnight Kiss (***1/2 out of four), an irresistible indie effort about two lonely souls hoping to find some modicum of contentment on the streets of Los Angeles. It's this year's version of 2 Days In Paris, a smart, perceptive, slightly cynical film which upends the traditional romantic comedy by marinating it in the realities of the modern world.

It starts off shortly before New Year's Eve, when people are desperate to find someone at the last minute so they don't have to welcome the new year alone. For failed screenwriter and successful slacker Wilson (Scoot McNairy), that means finding an alternative to simply masturbating over a Photoshopped picture of the girlfriend (Katy Luong) of his easygoing roommate Jacob (Brian Matthew McGuire). At Jacob's insistence, Wilson posts a self-deprecating singles ad on Craigslist; to his surprise, he receives a reply from a woman named Vivian (Sara Simmonds), who agrees to meet him in person. Vivian, to put it bluntly, is a real piece of work: abrasive, rude, callow, and promising to dump Wilson before sunset if he doesn't keep her entertained. But as the hours pass, both of them let down their guard and seem poised to make a real connection.

Both the situations and the dialogue created by writer-director Alex Holdridge come across as honest rather than scripted, and his interest in fleshing out his characters extends past Wilson and Vivian and also touches Jacob and his girlfriend Min. All four actors do an exemplary job of making their characters sympathetic -- a real challenge, in the case of Simmonds -- and the entire movie is filmed in crisp black and white by Robert Murphy. And while we've come to expect our indie-flick soundtracks to be suitable for the occasion, the one featured here is a real treat, highlighted by Sybil's remake of Scorpions' power ballad "Wind of Change." Tactfully employed in both the final scene as well as the end credits, it truly allows audiences to head home with a song in their heart. 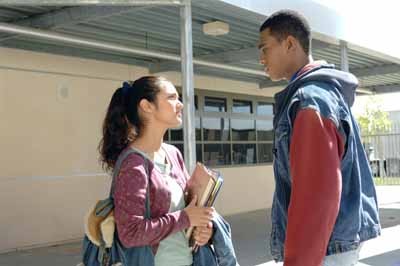 AS TOWELHEAD (*** out of four) OPENS, a 13-year-old Arab-American girl named Jasira (played by Summer Bishil, 19 at the time of shooting) is living with a dim-bulb mom (Maria Bello) who ends up choosing her boyfriend over her daughter after a sticky situation develops under her roof. Jasira is shipped off to live with her humorless Lebanese dad (Peter Macdissi) in a tidy Texas suburb; as if dealing with his strict rules isn't bad enough (he slaps her at the breakfast table when she emerges from her room wearing shorts and a loose T-shirt), she also has to contend with the lecherous advances of one of the neighbors (Aaron Eckhart), a bigoted army reservist who finds himself drawn to this jailbait.

Needless to say, any movie that explores the sexual awakening of a teenage girl in such depth is going to be subject to microscopic scrutiny and potential charges of exploitation, but Towelhead, based on the novel by Alicia Erian, deftly sidesteps the muckraking and instead serves up an affecting drama about a lovely child who can't seem to catch a break from most of the adults surrounding her. Yes, it's unremittingly downbeat for stretches at a time, but the movie is made palpable by the understated direction by Alan Ball (creator of TV's Six Feet Under) and the central performance by Bishil, a relative newcomer who seems to have shed the Nickelodeon/Disney Channel spots that until now have served as her bread and butter. 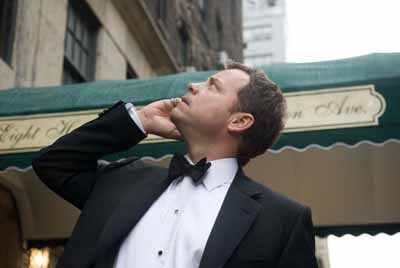 GIVEN THE DEARTH of quality romantic comedies produced by the major studios -- these days, it's up to the independent outfits to provide them (tag In Search of a Midnight Kiss as Exhibit A) -- it's a pleasant surprise to discover that Ghost Town (*** out of four) manages to buck the odds.

Certainly, the high-concept storyline makes it sound as dreary as a Kate Hudson vehicle. (Speaking of which, Hudson's own rom-com, My Best Friend's Girl, opened the same day as Ghost Town, but without the benefit of advance critics' screenings.) Bertram Pincus (Ricky Gervais), a dour dentist who avoids interacting with people at all costs, suddenly finds himself surrounded by dead people. That's because he himself died for seven minutes while undergoing a routine colonoscopy, and this established an open line of communication with restless ghosts still hovering around Manhattan. Chief among them is Frank Herlihy (Greg Kinnear), who demands that Bertram prevent his widow Gwen (Tea Leoni) from marrying a human rights lawyer (Billy Campbell).

Ghost Town is given a significant boost by the presence of Gervais, whose caustic wit and no-nonsense demeanor provide the picture with more of an edge than it would have received with a more conventional leading man at the helm. But the picture surprises in other ways as well, thanks to unexpected tweaks in the script co-written by John Kamps and director David Koepp (best known for penning such blockbusters as Jurassic Park, Spider-Man and the latest Indiana Jones installment). Kinnear's ethereal hubby isn't exactly the dashing nice guy he initially seems, while the emotionally torn widow played by Leoni (who really needs to appear in more movies) isn't just a pawn to be moved around by the three men in her life but instead takes control of the situations presented before her.

Charming and unassuming, Ghost Town offers enough in the way of laughs to raise anyone's spirits.

AS IS THE CASE with most great filmmakers, Joel and Ethan Coen produce only two classifications of pictures. There's Major Coen, like No Country for Old Men and Fargo, and there's Minor Coen, such as Intolerable Cruelty and The Big Lebowski. (And then there's the strange case of Raising Arizona, which looks Minor but is Major every step of the way.) Burn After Reading (*** out of four) is decidedly Minor Coen, which means that it's still more enjoyable than a lot of the product out there. With George Clooney and Brad Pitt in full-on clown mode, the film feels as much of an insignificant riff as those Ocean heist flicks, but with the Coens at the helm, it showcases a pitch-black comic sensibility that will either attract or repel moviegoers.

The memoirs of a recently fired CIA wonk (John Malkovich) accidentally fall into the hands of a pair of idiotic gym employees (Pitt and Frances McDormand). Their awkward attempts at blackmail produce a vortex of misunderstandings that also ensnares the ex-CIA suit's aloof wife (Tilda Swinton) and her lover (Clooney), a bundle of energy who enjoys jogging, womanizing and building stuff in his basement (his creation yields one of the film's biggest laughs and will be at the top of most women's Christmas wish lists).

The three guys are more fun to watch than the two gals, although the film is stolen by J.K. Simmons (Juno's dad) as a thoroughly confused CIA bigwig. Still, while the picture offers strikingly off-kilter characterizations and a number of huge guffaws, it won't remain in the memory like most of the siblings' output. Check out Burn After Reading, but then expect to Forget After Seeing.

IN SEARCH OF A MIDNIGHT KISS