Geddings on McCrory: "This guy is vulnerable" 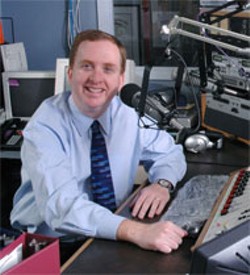 Most Charlotteans have never heard of Kevin Geddings, but millions of people across the country know Bubba.

Bubba was the redneck Georgia convenience store clerk who said, "Here in Georgia, we just love David Beasley!" It was the political ad most experts credit with ending Beasley's gubernatorial career. In the 1998 South Carolina governor's race, Bubba told SC voters that thanks to Beasley's opposition to a lottery, South Carolinians were spending more than $100 million in Georgia, money that was putting computers in every one of the state's classrooms.

Geddings created Bubba, and in the process put Democrat Jim Hodges in the governor's office in a state most people said would never elect another Democratic governor. Political experts called the ad one of the 10 best political attack ads in the nation that year.

Then, just for good measure, Geddings coordinated the statewide campaign for the lottery in South Carolina the next year and won that one, too. Now Geddings, who runs his advertising agency out of Charlotte, is focusing his attention on Charlotte Mayor Pat McCrory. Sources say it's all but certain that he'll file to run against McCrory in the coming weeks. Needless to say, he'll be doing his political ads himself.

If he runs, Geddings plans to pump $300,000 of his own money into the race and raise $400,000 more. He says he'll spend half a million dollars on an ad blitz 10 days before the election, the same tactic he used to put Hodges in office against pretty high odds. Granted, Hodges did lose his re-election bid two years later, which Geddings also orchestrated, so it's not like he's made of Teflon. But given that McCrory hasn't had a single serious challenger since he won his first mayor's race 10 years ago, this could be fun to watch.

Still, McCrory would be hard to knock down, even for an old pro like Geddings. The mayor is well known, pretty popular and can raise money by the fistful; raking in $100,000 in a single fundraiser from the city's most powerful people is nothing.

But Geddings can raise money, too, and lots of important people owe him favors. He pulled in over $30,000 in a single fundraiser he coordinated for Governor Mike Easley. He also pumped time and money into other statewide campaigns and has worked with the state's Democratic leadership on several races. But for the Democratic power players, supporting Geddings would mean defying Charlotte's uptown crowd, so what they'll do is anyone's guess.

Assuming he gets his hands on enough cash to pull it off, Geddings' campaign plan will be pretty simple. The last time Charlotte had an ostensibly unbeatable incumbent mayor, Charlotte City Council member Sue Myrick took him out by standing on street corners during rush hour traffic with a sign advising motorists to vote for her if they were sick of the traffic. Since then, Charlotte has become the second most congested mid-size city in the nation, according to the Texas Transportation Institute.

If Geddings hops into the mayor's race, he plans to essentially re-run Myrick's winning campaign, but with a lot more money and a more sophisticated television ad campaign. "I'm not delusional," Geddings assured Creative Loafing last week. "I really sense that this guy is vulnerable."

Geddings wants to build roads, lots of them. And he wants to see how many people ride the South Corridor light rail line before spending hundreds of millions more dollars on a line to Davidson. In the meantime, while we're waiting for those ridership numbers to come in, he wants to lobby the state to allow us to spend some of our mass transit tax money on desperately needed road improvements. And if the South Corridor ridership figures aren't impressive? He would likely spend the rest of the transit tax money on roads, too. Even if ridership numbers are impressive, he says he'll find other creative ways to build more road lanes, paid for by tolls, new transportation fees or creative financing plans. But either way, talk of additional asphalt will no longer be blasphemy down at the Government Center if he's elected.

"McCrory has been mayor so long," said Geddings. "How does he answer the issue that we're sitting in traffic that is choking this community? 'Oh, that's not my fault. That's a state road.' I mean that's a great message if he can pull it off. I just don't think people are going to buy it."

Geddings says McCrory has failed to step up to help solve some of Charlotte's major problems. "When people say they are concerned about schools, McCrory says the city doesn't fund schools," said Geddings. "Well, everybody knows the mayor is the bully pulpit leader of this community. He should step up. He should be on that school committee with Mayor [Harvey] Gantt and others. He should be chairing it. Instead of doing the sexy, blitzy stuff of NASCAR museums and the trolley, he should be focused on traffic and bringing some leadership to schools and really trying to do something to help small businesses."

It's worth noting that Geddings admits to voting in 1998 for the mass transit tax that made light rail possible. And there was that nasty little episode back in 1999 in South Carolina when Geddings was Hodges' chief of staff and Republicans accused him of helping Maximus, a company he did consulting work for, secure $4 million in state contracts. The state GOP sued the governor's office after it refused to turn over a copy of an e-mail that supposedly implicated Geddings, but after the governor's office said it couldn't locate the e-mail, the whole issue eventually evaporated.

"What Geddings is saying about the issues really does indicate that he knows what buttons to push to peel away McCrory's base of support," Arrington said. "He could be a threat. If he can raise $700,000, his chances are good."