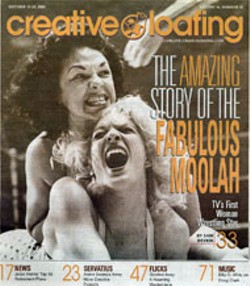 Women's professional wrestling may be cartoonish and outrageous, but Ruth Leitman's new documentary, Lipstick & Dynamite, which opens in Charlotte this weekend, takes seriously both the subject matter and the women involved. Through interviews and archival footage, the film traces the lives and careers of six women who pioneered the early days of "lady rasslin'," including the Fabulous Moolah, who runs a wrestling school in Columbia, SC, and Penny Banner, a real estate agent in Charlotte.

early all the women featured in the film experienced impoverished and sometimes abusive childhoods, and had to fend for themselves from an early age. They would need this steely resolve when they entered into the rough and often sleazy business of wrestling, in which Charlotte played a pivotal part.

"All these woman wrestled in Charlotte a lot because the territory was pretty important," says Leitman. "Although the film is about wrestling, it's also about how these Southern women prevailed over adverse circumstances. Many of them came from a culture of violence, and I was really interested in exploring how they used those experiences to not only survive, but to have a career and see the country. It was their ticket out."

During the 40s and 50s, when women like Moolah and Banner began their careers, female wrestling was seen as a novelty, alongside circus freaks and animal performers. They also were at the mercy of crooked, domineering promoters such as the notorious Billy Wolfe, who was as interested in sleeping with the girls as he was promoting them — not to mention pocketing 50 percent of the women's already meager incomes.

Moolah, born and raised in Tookiedoo, SC (and profiled in a 2002 CL cover story), is arguably the most famous female wrestler of all time. Many of the other female wrestlers in the film describe Moolah as greedy and opportunistic. Yet they also begrudgingly admit that Moolah's shrewdness helped her become one of the most successful wrestling promoters in the business.

"I wouldn't say there are hard feelings, but we don't like each other," says Banner, one of Moolah's biggest rivals. Banner got involved in wrestling when an agent with the National Wrestling Alliance (NWA) spotted her working at a restaurant in St. Louis, MO. Athletic, young and pretty, Banner attended Billy Wolfe's girl's wresting school in Columbus, Ohio, and after only a few weeks of training had her first match in 1954. She was just 19 years old. "I made about $50, which to me was a lot of money back then," Banner says.

At the time, Wolfe had a stronghold on the business, and he sent his female wrestlers to any territory that would have them, including Charlotte, where famed wrestling promoter Jim Crocket Sr. lived. Over the next several decades, Banner and the other female wrestlers performed at numerous Charlotte venues, including the old Park Center (now the Grady Cole Center), Independence Arena (now Cricket Arena) and Memorial Stadium. "Charlotte was a real hotbed for wrestling" Banner says. "The crowds were always great."

Banner settled in Charlotte in 1962 with her then-husband Johnny Weaver, a professional male wrestler. She retired from wrestling in 1977, and today works as a realtor and competes in the Senior Olympic Games. In the film, there's footage of Banner training at the Aquatic Center and throwing discus and shot put behind a Carmel Road business complex. (Banner also has a new book out called Banner Days; for more info, see www.bannerdays.com.)

Lipstick and Dynamite provides a telling look into a bizarre network of sex, jealousy, greed, hard knocks and, most of all, six tough-as-nails broads who helped pioneer what has become a pop-culture phenomenon. "None of us thought we were pioneers," says Banner. "I'm not even sure I knew what that word meant. We were just doing what we had to do to make it."

The documentary Lipstick & Dynamite opens at the Manor Theatre this Friday. For more information about the movie, check out: www.lipstickanddynamitethemovie.com.