Get Hard: You gotta have Hart | Reviews | Creative Loafing Charlotte
Switch to the mobile version of this page.

Get Hard: You gotta have Hart 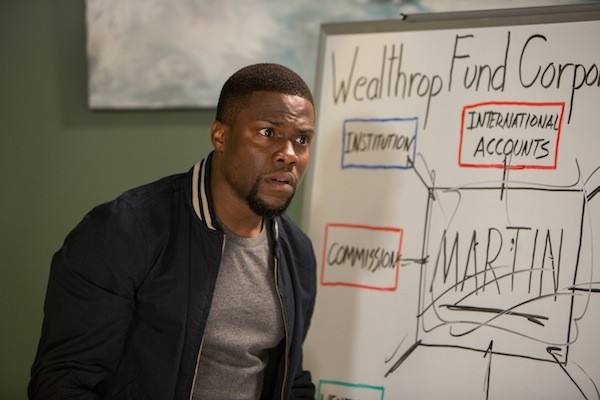 For a movie that spends so much time wallowing in gay panic, Get Hard should be an early frontrunner for the title of the year's worst comedy; instead, it provides enough sharp satire on other fronts — and finds one of its stars fully coming into his own — that it easily escapes that designation.

Kevin Hart has impressed me repeatedly in subpar movies (including The Wedding Ringer, a 2015 comedy far worse than this one), and he does so again in this picture. He's cast as Darnell Lewis, a loving family man and the hard-working owner of a car-wash business that services the employees of a multimillion dollar corporation. One such suit is James King (Will Ferrell), a one-percenter who isn't evil so much as self-absorbed. So when James gets falsely accused of monetary fraud and sentenced to a minimum of 10 years within the maximum-security walls of San Quentin, he realizes he needs someone to help him toughen up so he won't be anybody's "bitch" behind prison walls. James approaches Darnell and offers to pay him for the guidance — he doesn't really know Darnell, but since he's black, he surely must have served time, right?

The script (credited to four writers) traffics in humor that will be tagged racist by some and commended for puncturing racism by others. There's certainly some controversial material on display (though nothing more envelope-pushing than what's found in Blazing Saddles, which today is deemed a comedy classic), but there are also a number of indisputable choice bits, such as when Darnell, fully engaged in his ex-con persona, tells his hard-luck story to James and it turns out to be the plot of Boyz N the Hood ("Wow, that almost sounds like a movie!" gasps James). Yet for every couple of gags that work, there's one that falls flat: A scene in which Darnell confronts a gang of racist bikers sounds like it can't miss, yet it proves to be a pale imitation of the terrific scene in 48 Hrs. in which Eddie Murphy's con similarly manhandles a bar full of rednecks (leading to him uttering the Oscar-worthy line, "I've never seen so many backwards ass country fucks in my life"). The odds when it comes to the homophobic material are even worse: There's only so many times one can watch Will Ferrell loudly weep over the prospect of getting anally assaulted (or, as one character delicately puts it, "He'll be choking on a mouthful of balls").

Ferrell plays his patented role of the clueless guy with a misplaced sense of self-importance, meaning that Hart spends half the time playing straight man to Ferrell's shtick. Yet Hart is such an intuitive and reflexive performer that even his reactions to James' shenanigans are funny. It's unknown whether he'll ever get lucky enough to land in a string of films as beloved critically as they are commercially (as Murphy managed pop-pop-pop coming out of the gate with 48 Hrs., Trading Places and Beverly Hills Cop), but he's holding up his end of the bargain, even when his writers and directors are letting him down.