Everything Must Go: Drop everything and go | Reviews | Creative Loafing Charlotte
Switch to the mobile version of this page.

Everything Must Go: Drop everything and go 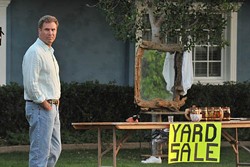 Inside every comedian known for vulgarity, there apparently resides a master thespian hoping to break away from the gags that initially defined his career. Jim Carrey has The Truman Show and The Man on the Moon, Adam Sandler has Punch-Drunk Love and Spanglish, and Will Ferrell has Stranger Than Fiction and now Everything Must Go (***1/2 out of four).

With few exceptions (The Truman Show, obviously), these films rarely make a dent at the box office, so Everything Must Go is destined only for art-house acceptance or, failing that, the tiny multiplex auditorium that isn't playing Thor or one of the myriad summer sequels. That's a shame, because this adaptation of a Raymond Carver short story ("Why Don't You Dance?") is a gem — perhaps more of a diamond in the rough than a polished jewel, but still.

Ferrell stars as Nick Halsey, a relapsed alcoholic who loses his job, his wife and his house all on the same day. Locked out of the home he shared with his spouse (who's temporarily living at an undisclosed location) and low on cash because she froze all their assets, Nick parks himself on the front lawn, guzzling beer while surrounded by all the possessions she chucked out along with him. Only two people in the neighborhood bother socializing with him: Samantha (an excellent Rebecca Hall), a pregnant woman whose husband is always away, and Kenny (promising Christopher Jordan Wallace), a portly boy fighting boredom since his mom's up the street working as a caretaker. Nick's AA sponsor, a cop (Michael Pena), informs him that he can't live on his lawn, but he can legally remain there for a couple of days if he holds a yard sale. So with the help of Kenny, Nick starts selling his cherished possessions, all the while attempting to come to grips with his present situation and future uncertainty.

While it's true that a better actor might have knocked the rich role of Nick Halsey out of the park, Ferrell is nevertheless fine in the part, allowing us to largely forget the baggage that his clownish canon can't help but bring to the project. It's a smart career move on his part, and it will be interesting to see if he's able to build on it. Yet the real discovery here is writer-director Dan Rush, making impressive debuts in both capacities. From little moments that sneak up and surprise you to climactic confrontations that don't always go down as expected, he shapes the material into something memorable and meaningful. The blockbusters will be the ones to stick around in the theaters all summer, but this is one of the films that will stick around in the mind for that same duration.