Going back to what works

The Rentals return with new friends in tow 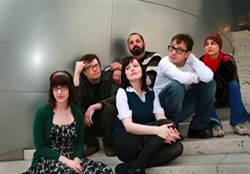 Sometimes we're almost faced with too many choices -- roads lead in every direction and we're left searching the heavens for a sign. This is where The Rentals frontman Matt Sharp found himself as '05 began. After releasing two critically acclaimed albums of full-bodied power pop, the former Weezer bassist had decamped to Leipers Fork, Tenn., to record his self-titled solo debut. It just took a little longer than they expected as Sharp got lost in a rabbit hole trying to perfect the tracks.

"It ended up in this kind of epic adventure," Sharp says from a tour stop in Minneapolis. "My friend, Josh [Hager], and I went to [Leipers Fork]. We were going to record the album in two weeks. Next thing you know it's three years later and the thing finally comes out."

As he toured in support of the disc, Sharp contemplated his future, which included the possibility of another solo album, collaborating with his friend Shon Sullivan and his band Goldenboy, reuniting The Rentals after a six-year hiatus, or even playing with Weezer again. Of all the options, bringing back The Rentals seemed the most unlikely.

"I thought that's got to be the most difficult choice to take, and it was something I was really hesitant about because I knew I didn't want to approach it in that same way," Sharp says, referring specifically to the band's revolving door membership. "There are a lot of beautiful things about it, but a lot of really unbearable aspects of it too. You finish a record, and it's 'What are we going to do now? Who's on board?'

"Some very serendipitous things had to happen," he says.

First, Sharp contributed Moog to the 2004 Tegan & Sara album, So Jealous. During the sessions he played them some home demos, including a rough version of the bouncy, keyboard-driven "Life Without a Brain," which appears on The Rentals' The Last Little Life EP that came out earlier this month. "They said, 'That sounds like the beginnings of the next Rentals record.'"

Still soured on his earlier Rentals experience, Sharp vowed he wouldn't "go down that road completely on [his] own." Fortunately he ran into Sara Radle, a San Antonio native who'd fronted a band called Lucy Loves Shroeder for seven years and was also now solo. She opened one of Sharp's shows, and later he recorded a duet with her that cemented the idea for him.

"When we started singing together it seemed effortless," says Sharp. "The male and female vocals and the strong presence -- all those things seemed very familiar and comfortable. Plus the fact that she can do so many things. It just seemed like this is a great place to start from, and it was coming at a time when all those other things were pointing in different directions."

With Radle in the fold, Sharp began assembling the band. The first person he added was Ben Pringle. Sharp liked that Pringle played bass, lapsteel and organ, but it was the fact he could play the trombone that sealed the deal.

"Took a good six months to even play a note on the thing," Sharp says with a big laugh. "Eventually I got to the point where I was, 'Alright, this is it. If we don't see a trombone in a couple days, we're going to reconsider this thing.'"

Drummer Dan Joeright came on board next, after they began recording the EP at his house. Rachel Haden, who sang backup in the original lineup, was the final piece, adding a sense of continuity that Sharp said was essential to him.

He explains that in the beginning, The Rentals was basically an excuse to work with Rachel, after Weezer did several tours with her and her sister Petra's band, that dog. Working with so many talented multi-instrumentalists was part of the allure for Sharp, and he says much of their time is spent sorting out the best approach to a song from the wealth of ideas. It may involve a bit more negotiation, but Sharp is infinitely happier.

"It was just about having that feeling that everybody is connected to the music beyond the recordings and that it is something they just feel is central to their lives," Sharp says. "I'm really happy to be surrounded by people that are excited about what we're doing and add some urgency to it. I think that's something very necessary for me, otherwise it will be 2010 before the next album comes out."

The Rentals will play at Amos' Southend with Copeland and Goldenboy on Aug. 30. Tickets are $16 in advance and $18 on the day of the show.