"Now we can put down roots and dream bigger dreams," Graham Carew says. He is talking about Goodyear Arts, the free-flowing program he heads along with fellow artists Amy Bagwell and Amy Herman, which has provided creative people in Charlotte with space, time, money and community in a succession of temporary homes — two Uptown buildings, both slated for demolition — since 2015.

Goodyear Arts is now moving to another venue, at Camp North End on Statesville Avenue. It will be the program's permanent home, or so they hope. For now, they'll call it home for at least the duration of a three-year lease.

On September 29, Goodyear rings up the curtain on its third act with a celebratory inaugural show, Wet Paint, its biggest and boldest yet.

"All of the art has been created this year, and some of it has been created and finished just for this show," Bagwell says. She and Carew say the work will be raw and unsettled, art that the creators are not yet comfortable with.

"Everyone wants a theme or guiding principal [for a show], and ours is risk," Bagwell says. That risk extends from the contributing artists to the curators. Though Carew, Bagwell and Herman for two years have fostered street-level art that's by the people and for the people, this will be the first art show the trio has curated. "We're splashed with a little wet paint ourselves," Bagwell says.

This unsettled feeling is not new for Goodyear Arts. The program began as an experiment and has been on the move since day one.

"We wanted to prove that artists can use spaces responsibly to create remarkable work, and that people will come to see it," Bagwell says.

That's when the project, then called Skyline Artists in Residence, occupied an abandoned Goodyear Tire building on Stonewall Street in July 2015. The ever-evolving, nomadic collective exited that venue seven months later, just ahead of the wrecking ball. Renamed Goodyear Arts, the program landed in another building slated for demolition, a former nightclub space on North College Street, to plant further seeds of challenging, experimental art. 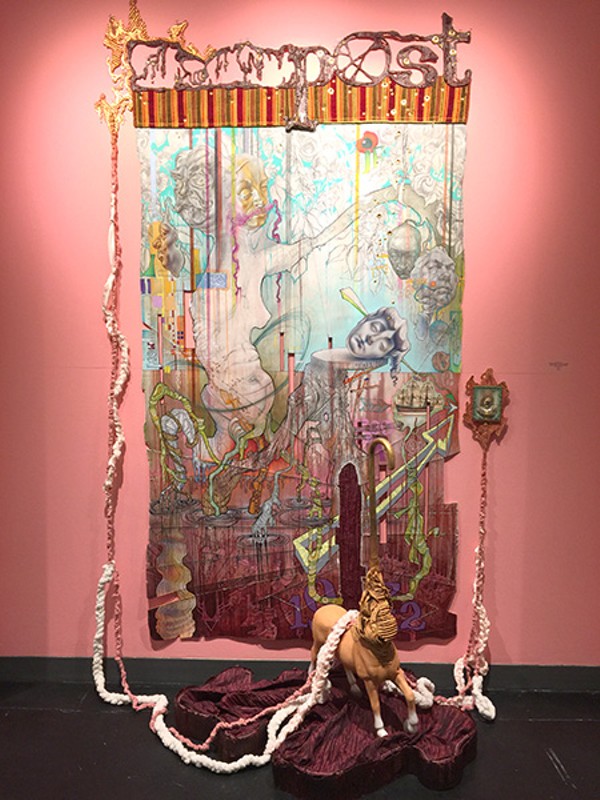 Concurrent with its focus on local artists, the byword for Goodyear has always been accessibility. While many perceived that Charlotte art was "banktown art," work that catered strictly to the elite, Carew says he came to see art as the great leveler.

"Our doors were always open to everybody," Carew adds.

Success at the two Uptown locations strengthened Goodyear Arts' conviction that art should be street level work for everyday consumption by everyone. Bagwell considers that point proved.

"We're not an experiment anymore," she says.

A stable location at Camp North End, plus twice as much space, means that the program can lay groundwork for expansion.

"It means we can make plans," says Carew, who hopes to add art classes and a future exchange and cross-pollination program between area artists and out-of-state collectives.

The Camp North End plans include a designated performance area for actors and dancers, designated rehearsal areas, studio space for alumni artists, and two month residencies that come with free studio space, a gallery show and a $1,500 stipend.

"We believe artists should be paid for their work," Bagwell says.

"It's not a ton of money," she adds, "but artists can use it to buy supplies, or to take time off from their jobs to produce art."

The work on display at Wet Paint comes from 31 contributors, a mix of display and performance pieces from artists new to Goodyear who have accepted the gauntlet thrown down by Bagwell, Carew and Herman to show the new and untested.

Carlos Alexis Cruz's Cirque du Soleil-style acrobatic troupe Nouveau Sud is slated to perform as a stripped down eight-to-ten person ensemble, spoken word artist Patrice Williams will perform a piece that Bagwell and Carew have not yet seen, and Bryan Olsen, whose psych rock band Shadowgraphs is playing, will also show his collage work. And that just scratches the surface of Wet Paint.

Performance artist Rebecca Henderson will debut an interactive piece about the relationship between social media, self-representation, performance, and activism.

"It is a humorous hypothesis designed to be tested by people," Henderson says, "part of a series I call 'Social Sculpture.'"

"My piece is called 'A(e)nthromology,'" Elisa Sanchez says, adding that the title is a mash-up of anthropomorphic and entomology.

"[It's] a collection of insects made from layers of hand painted paper. [They are] combined with human features and organs to create not-so-typical creatures that live in my imagination," she continues. "They definitely elicit strong reactions. [People should] feel free to let me know which one grosses them out the most."

Jason Watson is showing his large-format mixed media drawing "The Ballad of the Anonymous Scribes," which was begun in 2013 and finished last January. Suggesting daydreams or nightmares, the piece seems appropriate for Wet Paint, Watson says, "because it lives in an indeterminate place within my own body of work. I don't quite know how I feel about it yet."

Carew welcomes the unsettled quality of these and other Wet Paint pieces and performances. It ties in with Goodyear's aesthetic and communal open door policy to all art, he says.

"Anyone who works with Goodyear or comes into a Goodyear residency knows we want to see challenging art," he continues. "They also know we want to challenge the artist."

Many in the arts community embrace Goodyear's brief and find inspiration in the program's invitation to accept risk.

"[Goodyear] allows for a discussion and connection about the struggle for creative time, space, and resources in a city of rapid growth," she says.

"Goodyear is consistently opening up a space for new voices, exciting art, and hard conversations," Sanchez says. "That's why it's important."

"Goodyear Arts is important for the Charlotte's cultural landscape because it's not fixed or tied to one particular idea of what it should be," Watson says. "It seems to be in a continual state of becoming."

So does Goodyear Art's move from Uptown mean it's no longer an alternative to the corporate-sponsored art that proliferates along Trade and Tryon streets? Is Wet Paint and the program's newly stable digs a declaration that Carew, Bagwell and Herman's mission has changed?

Bagwell says no. Goodyear's mission has not so much changed as expanded at Camp North End.

"We're still working to dispel the myth that there's not great art happening in Charlotte — because of course there is."

"We need the institutions that we have, and they do really good work," she says, "but we also need something that is street level. It's great to be that."