Guardians of the Galaxy: Space Oddity | Reviews | Creative Loafing Charlotte
Switch to the mobile version of this page.

Guardians of the Galaxy: Space Oddity 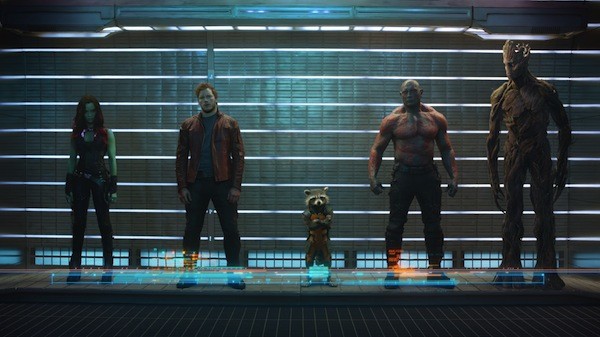 The Marvel cinematic universe certainly hasn't been lacking for humor. With Robert Downey Jr. leading the pack with his interpretation of Tony Stark/Iron Man as the class clown, Mark Ruffalo's Bruce Banner/Hulk and Scarlett Johansson's Natasha Romanoff/Black Widow offering sly asides, and Chris Evans' Steve Rogers/Captain America and Chris Hemsworth's Thor/just Thor milking culture-clash nyuks, the MCU often feels like an extravagant party filled with good-looking people possessing good senses of humor. Here, then, are the title characters from Guardians of the Galaxy crashing the party and showing the participants how to really loosen up and best sport that proverbial lamp shade on the head.

Indeed, it's the movie's rollicking good cheer that ultimately might help endear it to folks who otherwise wouldn't know the Guardians' Rocket Raccoon from The Beatles' Rocky Raccoon. For that, give a lot of credit to writer-director James Gunn (sharing scripting credit with newbie Nicole Perlman). Yes, Gunn contributed the execrable "Beezel" sequence to the execrable Movie 43 and penned the soggy scripts for those live-action Scooby-Doo flicks, but the credit of note here is 2006's Slither, an enjoyable horror romp that derived as much pleasure from Gunn's cheeky approach as from lead Nathan Fillion's easygoing demeanor. Gunn applies the same degree of levity to this picture, which is really the only way to go when one of your heroes is a walking, talking tree.

That would be Groot (a CGI creation voiced by Vin Diesel), the generally mild-mannered sidekick to the aforementioned Rocket (voiced by Bradley Cooper). Groot is only able to utter the phrase, "I am Groot," although the anthropomorphic Rocket never has trouble understanding what he's really saying; in that respect, Rocket and Groot register as the Jay and Silent Bob of the space set. They're just two of the misfits who reluctantly come together to stop an evil megalomaniac named Ronan (Lee Pace) from carrying out the usual galaxy-conquering agenda. The skilled assassin Gamora (Zoe Saldana) and the brutish Drax the Destroyer (wrestling star Dave Bautista) also belong to the ragtag outfit, although the lynchpin is Peter Quill (Chris Pratt), the only Earthling among the quintet and one so cocky that he's given himself the possibly overreaching moniker of Star-Lord. A scoundrel with a soft spot for classic rock, it's Quill who's most responsible for getting these "losers" — beings who have all lost something, he quickly explains — to work together as a team.

The expository scenes are presented more dutifully than usual — they're arid when compared to what follows, as if Gunn were impatient to get the requisite setups out of the way — and, as expected when a Hollywood production has millions to burn, the climactic space battles run on too long, as if the makers wanted to make sure audiences got a good look at every single effect employed during this chunk of celluloid. And while most of the humor is unforced and flows naturally from the material, select bits are either too clunky or too cutesy. But these quibbles aside (and, honestly, the fanboys will be too jacked up to even notice them), Guardians of the Galaxy is winning entertainment, with a sleek visual style that befits its carefully contained universe and characters unlike any others audiences will see in a movie this year. The exception is Groot: We'll be seeing a whole roster of similarly wooden protagonists when The Expendables 3 hits theaters later this summer.