Recalling a chance meeting with the reclusive singer-songwriter 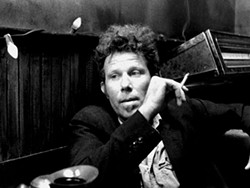 He's more myth than man now. He tours less than John Lennon, stays away from TV and when he does meet the press, he doesn't discuss depression, Jesus Christ or show you his ugly fucking paintings. In other words, Tom Waits is both legend and lad. And a force of nature, who appears as often as Kohoutek. He simply puts out superb records and lets them tell you about his world view.

Still, I have a different slant on Waits than most mortals. I once spent the evening with him, listening to songs and smoking his cigarettes, which came with coupons in the back which were redeemable for low-priced lawn furniture. I met Waits the guy.

I was a teen and hadn't yet found my calling. Sincere, deluded, I wanted to be a singer/songwriter. So, naturally, I was obsessed with other singer/songwriters. My tastes were so catholic, I should've worn a crucifix. I listened to Jackson Browne sing about the apocalypse. Fell so hard for Bruce's street poetry, I bought Chuck Taylors and constantly tried to start rumbles. Dug Lou Reed's transvestites so much, I once went onstage wearing eyeliner and heels. Each week, I became another one of these personalities. I was the "Sybil" of singer/songwriters.

Then I met Waits. Everything changed. He showed me that the songwriter's life was not, in Ed Norton's words, "All beer and skittles." It was 1974. One night, I was watching TV in my dorm in D.C., and there was Waits, talking enough incoherent jive to make Keith Richards sound like Alistair Cooke. Then, sitting at the piano, he played Hoagy Carmichael chords and spat out "The Ghosts Of Saturday Night." It was poetry and music. It was cool.

Watching the cat with the newsboy cap, cigarette bobbing in his mouth like it was conducting an offscreen orchestra, transformed me. In four minutes, I morphed from Brady kid to Bowery Boy. Waits was playing D.C. the next week: it seemed fated.

Now that he hides, puffing cigarettes in the pantheon, people know little about Tom Waits. But back then, people knew nothing about him. He opened that night, for some bluegrass group. The kind of odd pairing Waits often had. Like opening for Buffalo Bob Smith, Howdy Doody's creator, who, the songwriter said, called him "Tommie," and "filled my piano full of candy."

On this night, Waits played to tepid applause. He sang "Martha" and "Grapefruit Moon." I loved every note and every aside mumbled by the guy in the ratty sports coat, Jimmy Cagney hat, pointy shoes. The audience went wild for "Ol '55," because they knew The Eagles had written it.

When the evening was over, the club emptied aside from a bartender, a waiter and me ... and Tom. He was at the bar and I walked over and introduced myself. I raved about the show. Waits suggested we move to a table. His rasp, still in its infancy, couldn't hide the fact he was kind.

I mentioned that, I, too, wrote songs. And trying to be as Beat as possible, said I was from New York City. Which I wasn't. But in those days, saying you were from the suburbs was, on the cool scale, somewhere between being a male nurse and drumming for The Archies.

Waits had a cold. However, he didn't hock hipster loogies onto the floor. Just gently blew his nose. He had, for an outer covering, a motorcycle jacket. He smoked continually. Now, I remember the name of the brand — Old Gold.

We sat at a table, where he'd laid his acoustic guitar. Waits took it out and said, "Play somethin'.'"

I proceeded to do a ballad called "Wanting." It mentioned Lacoste shirts and split-level houses. When I was done, Waits nodded approvingly, with an unmistakable smirk on his unshaven face. "'New York City,' huh?" he rasped.

I wanted to self-immolate; I'd been outed as a suburbanite. Waits reached for the guitar. But instead of beating me with it, started to play. A new song, "Eggs And Sausage." He wanted me to hear it, of course. But I think Tom was also trying to get me to come clean about my roots and "write what you know."

When he'd finished, I asked the most important question: "How did you get signed?" Waits told me, obscurely.

"During high school," he said, "I delivered pizzas. I sang in a soul band. Listened to Louis Armstrong and Howlin' Wolf. I couldn't handle the current stuff, like Blue Cheer. I was in the Coast Guard. When I got back, I wrote a lot of songs. And played everywhere I could."

Waits smiled and lit another cigarette. Even at 18, I understood. As Kerouac once said about writing, Tom echoed: "You gotta stick to it with the energy of a benny addict." I was too impatient to be happy about what he'd said. But that's OK. I played a song for Tom Waits. He'd liked it. And given me his blessing.

What I remember most, came at the end of our hang. The bartender said, "Tom, I know an after-hours joint. You wanna get a coupla drinks?" Waits said, "Nah, I'm going back to my room. Gotta get rid of this cold."

Then he put the motorcycle jacket over his sports coat. I still remember it because, with the coat dangling four inches past the leather, it looked ridiculous. Waits shook my hand, noting, "More 'n likely, we'll see each other around."

That we didn't was OK. Eventually, I gave up music and started writing. But I still remember watching Waits walk out of that Washington, D.C., nightclub, guitar in hand. Coughing away. Puffing on another Old Gold. He growled something to himself and opened the door. And then, with just a bit of hesitation, Tom Waits closed it. Just as gently as you please.