The News of Art

By August of this year, even though I had been back in Charlotte for about nine months and reconnected with a lot of old friends, I still had not been able to get out and visit all of the new people and places that had sprung up since I'd left the city for three years in 2013.

One of the places I wanted to check out was C3 Lab. Creative Loafing's Ryan Pitkin had just written a cover story on this terrific hub of artistic creation that includes markerspaces, workspaces, studios and a gallery.

The art opening Are We Human(e)? was the perfect opportunity.

For one thing, the name was compelling. During the time I was away, Charlotte had positively exploded with prolific artists and activists who were making statements about the status quo in new urban workspaces from Plaza Midwood to South End. This wasn't all that surprising: After HB2 put the city front and center in the national debates on transgender rights, and the Keith Lamont Scott uprising put us squarely in the national discussion about police killings of black Americans, Charlotte was prime for an artistic renaissance.

And then came the election of Donald Trump and his presidential stamp of approval to hatefulness. The idea behind Are We Human(e)? — to reclaim ourselves as not just human, but as compassionate, benevolent, empathetic humans — seemed a good way for local artists and lovers of art to get a recharge.

For another thing, the exhibit included works by the artist Mark Doepker, whom I'd recently interviewed about a Black Lives Matter piece he'd been assaulted for just prior to my return. A local racist had attacked Doepker for displaying the piece on his car. 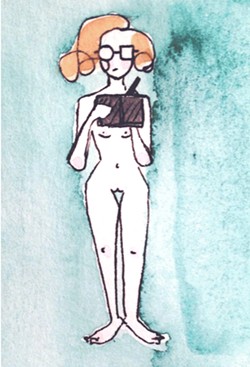 I wasn't familiar with the second name on the Are We Human(e)? bill: Hannah Barnhardt.

Upon walking into C3 Lab that night, I immediately saw Doepker's familiar images — the face with a target on it, the woman's natural afro entitled "Don't Touch Her Hair." But what lured me in were the hundreds of tiny sketchbook pages covering the wall spaces around one of the corner areas.

When I looked more closely, I recognized some of the people in these sketches: local rappers Black Linen and Nige Hood, friends gathered around a table at Fuel Pizza, people partying at Hattie's Tap and Tavern.

Doepker pointed me to a small-framed woman surrounded by gallery patrons. It was Hannah Barnhardt, the artist responsible for those sketches. I needed to talk to her. We needed to do a story on her and we needed to do it now. But since her work has a journalistic sensibility, a regular story wouldn't be quite right. She should do the story herself — in images.

"I would love to do something like that," she told me, and we set up a meeting.

Hannah arrived at the CL office some time later to talk with art director Dana Vindigni, Ryan and me about her ongoing project The Real Charlotte Observer, an art/journalism endeavor she'd begun in 2014. That's the year she began taking her sketchbooks to local clubs, restaurants, court trials and political demonstrations, and drawing the people in attendance. If the people moved on, she'd move on, too, having sketched only partial images; if they remained in the same place, she'd sketch entire scenarios.

The results are historical records, but not like typical photographic records. Hannah's images contain the hesitation of an artist's hand, and the energy, either calm or nervous, of a situation or setting. In a club, the atmosphere can be chaotic, and Hannah's images reflect that chaos. At a demonstration, the atmosphere can be angry or triumphant, and her images capture that anger and triumph.

She had begun the project as an exercise to improve her skills, but soon saw a greater purpose. "I realized that it had value on its own as a documentary project," she told us. "I pursued it more intensely just for the sake of recording life in the city, drawing more often, at a broader range of events, and turning the drawings around to the public faster and trying to distribute them more widely.

"I think of it as a visual newspaper, focusing on society and culture," she said. "Sort of like the gossip pages."

For this week's cover story, we asked Hannah to document a typical night on the town — at a club or music venue — from her perspective. Ordinarily, she labels the settings of her works, but for this piece the setting could be any Charlotte club in any neighborhood. We also came up with a theme, "The Melt" — that strange thing that happens between the time people arrive at a club and the time they leave. People meet, socialize, get drunk, act weird, go home.

The scenarios Hannah sees when she's out sketching the town are not always positive, and like a good journalist, she doesn't draw them as such. She draws real life in Charlotte — the good, the bad, the uncomfortable. And she does it spectacularly. Enjoy Hannah Barnhardt's "The Melt," and read about her process in the accompanying Q&A. Hers is a different perspective from what you ordinarily see at traditional news outlets, either print or online. It's real and raw — and about as accurate as journalism gets.