He started rapping the weather 10 years ago. Today, he is the most popular weatherman in America. 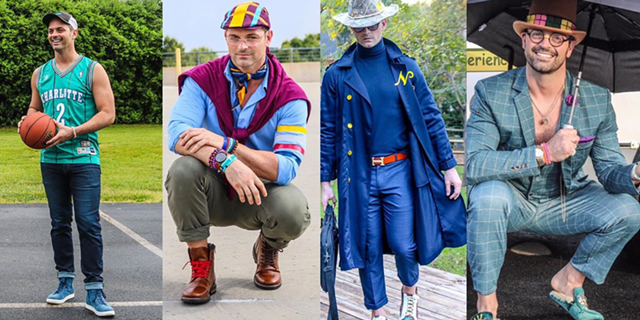 After a routine goofy social media post, Nick Kosir, a morning host of Fox46's Good Day Charlotte, became an overnight internet sensation. His savvy dance moves have garnered him over half a million followers in less than two months.

“We’re halfway through the week and I felt like dancing so I hopped on that #slidelikethischallenge that I keep seeing pop up in my timeline” Nick posted to Instagram.

Some of you are probably wondering what this dance is. Well, the “Slide Like This Challenge” has been circulating the internet for at least three years. The dance challenge was inspired from the 2015 hit single “Slide Like This Krewlibs, Pt. 2” by popular rapper, Mr. Hotspot. In recent months, it picked up momentum again. Thousands of fans flocked to Nick's post, tagging their friends.

Viewers loved seeing a suited up, working professional break it down to a rap song. Fans were begging for more, some are even calling for him to be on Dancing With The Stars. Nick's video has reached over six million views on his personal Instagram account, hundreds of millions of views in total.

“Since y’all liked my last dance challenge so much I figured I’d hop on another one real quick." Nick posted.


NICK HAD A WEATHER REPORT GO VIRAL 10 YEARS AGO.

Before everyone and their mother had an Instagram, Nick had another video go viral. Same weather report, different day. Nick was reporting for a Texas Fox affiliate and wanted to spice up his news cast and used his lyrical rap skills do it. On a hot summer day in 2009, Nick made his debut as “The Rapping Weatherman.” The videos were posted to his YouTube channel, the most popular one received over 700k views. These knee-slapping, tears-dropping, goofy videos, dating back 10 years, can be viewed on his YouTube Channel.

Now living with his family in North Carolina, Nick is the morning host of “Good Day Charlotte.” In 2017, Nick started posting more on Instagram. Road sign irony, parodies, silly outfits, and more. Last year he launched "The Drip Chronicles." Keep reading to hear from Nick how this got started, and what Panther's football star inspired it.


So, who is Nick Kosir? We reached out to learn more about America’s favorite weatherman.

Here’s what he had to say:

What inspired you to release the “Slide like this Challenge" video?

Nick: The ‘Slide Like This' challenge was ALL OVER Instragram and Tik Tok – it was impossible to escape and mesmerizing to watch. I watched it roughly 100 times and then decided to give it a try the next day at work. I should note that it was a quiet weather day; don’t expect dancing when there’s severe weather in the viewing area.

Nick: Formal training? Not one bit. In the past, my dancing has been limited to getting down on the dance floor at wedding receptions. I’ve never taken pride in my dancing, which is why gaining Instagram fame for it is so bizarre to me.

How long have you been a meteorologist?? Why did you become one?

Nick: I didn’t choose meteorology… meteorology chose me. Ok, so maybe it wasn’t that dramatic, but I didn’t set out to become a meteorologist. My first job out of college was working as a news reporter at a small TV station in Ohio. I quickly learned that covering city council meetings and fundraisers wasn’t my forte. My boss picked up on this, too. He had me try my hand – err, arm? – at the weather wall one day when the normal weather girl was out. One day was all it took… I loved it and enrolled in Mississippi State’s online meteorology program shortly after. Now, fourteen years later, I have zero regrets.

When did you first start rapping on air?

Nick: I first rapped the weather in 2009. At the time, I was working as a morning meteorologist at the FOX affiliate in Beaumont, Texas. There was a six week stretch of sunny, hot and humid weather. I decided since the weather pattern wasn’t changing, I’d switch up what I could control… my delivery. Luckily, it went over well, and my bosses let me keep doing it.

What’s the story behind The Drip Chronicles?

Nick: My job title here at FOX 46 is morning meteorologist, but some viewers might be surprised that when I’m not on air, I’m encouraged to post on social media throughout the day. When I launched the ‘Drip Chronicles,’ I had been at FOX 46 about four years and was running out of ideas for social media posts. I was scrolling through my Instagram feed and noticed that Cam Newton had posted an ‘Outfit of the Day’ photo, which had garnered THOUSANDS of "likes" in minutes. My first thought was how impressed my boss would be if I generated a social media post that had just a fraction of this response. I decided to recreate Cam’s look with clothes from my closet (and some accessories from my wife). The post went over well, so I ran with it. The ‘Drip Chronicles’ has been a ton of fun! And, I truly appreciate everyone that has supported it – including Cam!

Your social media has blown up since the slide video went viral. How has this affected your life? Work?

Nick: I get a lot more DM’s and people have started recognizing me when I’m out and about. Otherwise, nothing has really changed. I’m still trying to find the balance between working as a morning meteorologist at FOX 46 and maintaining a presence on social media with life at home as a husband and dad. The lawn doesn’t mow itself!

Favorite thing about your job?

Nick: Hands down the best part about my job are my co-workers. We’re like a family, and I look forward to seeing them and talking to them every time I head into work.

What’s a fun fact about you?

Nick: I played against and guarded LeBron James during a basketball scrimmage in high school. Luckily, social media didn’t exist then and the tape of that game is long gone!