Heart of Darkness exhibit puts the spotlight on colonialism's past

Venturing into the Gantt 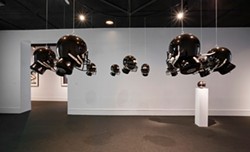 Performance artist Andre Singleton sits on a peacock chair on top of a staired pedestal during his role as an "oracle" in artist Heather Hart's "The New Numinous Negro" installation. But his placement is temporary. The New York-based Singleton can only travel occasionally to make Hart's piece come alive.

While in Charlotte for the opening of Harvey B. Gantt Center for African-American Art + Culture's Venturing Out Of The Heart Of Darkness exhibit, he's placed on the throne-like construction, which folks are encouraged to climb. Once they reach the surface and come face to face with him, they may place gold pieces of paper onto his skin and ask him any questions or for advice. (Side note: When Singleton is absent — for the rest of the exhibit's run — an object will sit in his spot for visitors to place the gold pieces on and make a wish.)

The black stereotype, perpetuated through pop culture, is something Hart hopes to make participants aware of through her work.

"Through this mythological ritual and play I want to explore how power around race and gender can appear hidden and often overshadowed or dismissed but also can shift and change depending on one's personal perception and action," she says.

The exhibit, featuring paintings, installations, videos and other works, is curated by Rehema Barber of the University of Illinois Urbana-Champaign. It was influenced by novelist Joseph Conrad's Heart of Darkness, an 1899 novel about colonialism in Africa. But the exhibit itself is a reflection of the perceptions of black culture and identity and how four main disciplines — economic, linguistic, mythological and psychological — are at the root of societal views of being black and how blackness is interpreted.

Navigate through Serge Alain Nitegeka's "Tunnel X," a huge installation of jumbled planks representative of the obstacles African immigrants face, and you'll then find your way to a colorful gate by Willie Cole. The work, titled simply, "The Gatekeeper," tells the story of how early Kentucky Derby jockeys were black and why Jim Crow tactics forced them out of the sport.

A walk through the gate leads to a set of works by installation artist and photographer Andrea Chung. She bases her works on the tragic story of a group of fugitive slaves living along the Le Morne peninsula on the island of Mauritius. It is believed that they committed suicide fearing they were about to be recaptured by soldiers ­— who were actually coming to spread the word of the abolishment of slavery. Featured are photographs from the island and an installation of boats made from sugar in representation of the colony's former production commodity. By the end of the exhibit, these boats will melt and disappear — a reference to pastime sugar production and the island's dwindling fishing community.

Other works in the exhibit include Bethany Collins' "As Black As This Board." It was created after a racist statement from the mouth of Southern-fried cook Paula Deen, who compared one of her black friends to an object — a blackboard. The artist explores objectification, racism, language, psychological implications and physical blackness on this chalkboard panel.

Physical color is further examined in JC Lenochan's "Melanin Chronicles: The Pursuit of Melanin 'Standard Kit,'" a suitcase full of lotions, soaps, creams and other products created to lighten or darken the flesh. It pushes viewers to think about the psychological and economic factors related to skin color and blackness.

The racial divide is also confronted head on in Sean M. Johnson's "False Identity 2," which consists of two pieces of one chair — one side tapestried in white and one side in black fabric — that have been split through the middle. The artist explores his biracial heritage through this contemplative work, the chairs balancing carefully next to one another.

Another intriguing work is Shaun Leonardo's "Bull in the Ring." The installation consists of football helmets that hang in a circle facing one another. It is a reference to two sports — football and bullfighting — and the hyper-masculine personas that weigh heavy in the sports world for black men. Leonardo, whom CL wrote about last October during his The Boxing Gym exhibit at CPCC, is known for immersing himself into whoever he is trying to portray.

Venturing Out Of The Heart Of Darkness is one of the most compelling exhibits to take refuge in the Q.C. so far. Many other works in the exhibit deserve closer inspection, including videographer Yinka Shonibare's "Odie and Odette," a video commissioned by London Royal Opera and Ballet and shot with Swan Lake in mind. Two ballerinas — one white and one black — move in paralleled sequences through a mirror reflection.

Give yourself plenty of time to explore the collection in its entirety and come prepared to pay homage to "The New Numinous Negro" and self-reflect.

"It is a human's nature to want influence on their future, and to believe in something outside of themselves," Hart says. "I hope those who participate with my work may examine their perception and position and see it is they themselves who may furnish their oracular answers."