Heaven help us | Reviews | Creative Loafing Charlotte
Switch to the mobile version of this page.

Is Robin Williams the Anti-Christ? 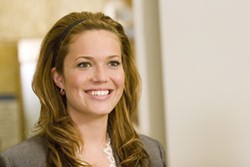 Mandy Moore has managed to costar in the two worst films of 2007 (thus far), yet let's not be in a hurry to pick up those stones and torches. Truth be told, Moore is turning out to be a welcome screen presence -- far better than most recent singers-turned-actors -- and she's hardly to blame for either the rancid Because I Said So or the toxic-waste comedy License to Wed.

The heir presumptive to last summer's You, Me and Dupree, this new film, offensive in its idiocy, similarly places loathsome characters in absurd situations that are meant to give off a funky black-comedy vibe yet instead reek only of desperation as well as the limitations of comically challenged minds. Under the disinterested supervision of director Ken Kwapis, four writers (four?!) jerry-build a premise that finds newly engaged couple Ben Murphy (John Krasinski) and Sadie Jones (Moore) forced to pass a marriage preparation course supervised by the Jones family's longtime minister, Reverend Frank (Robin Williams). Along the way, Reverend Frank, aided by his young apprentice (Josh Flitter, as annoying here as he was in Nancy Drew), bugs the couple's bedroom, embarrasses Ben in front of his future in-laws, and drives Sadie away from her fiancé.

Sharp scripting could have given Frank the balance required to make him an apt comic foil, but here he's simply creepy, a problem expounded by the casting of Robin Williams. Williams is in his manic, whoring mode here, an approach well past its expiration date in terms of actually resembling anything funny or topical. (One bit finds Williams making a joke about O.J. Simpson; heck, why not cracks about the Pentagon Papers or Rosie the Riveter or even the invention of the light bulb?)

Williams has made so many one-star comedies that it's impossible to keep count at this point. But rest assured that there's a multiplex in hell that screens them on a perpetual loop.