A review of this past weekend's comic event 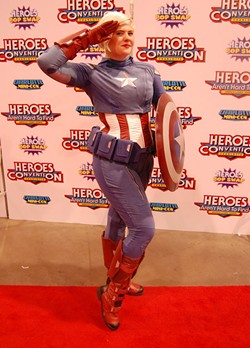 "Sensory overload." That's the phrase I've heard most from first-time convention-goers, moments after entering the floor. And they're right. Creators signing and chatting with fans, vendors haggling over toy prices with customers, hundreds of intricately crafted costumes funneling through the aisles, and the general buzz of fandom — the comic book convention is a vast collection of moving parts. But it's not the kind of thing that can just be thrown together.

Charlotte's HeroesCon knows that. And for 32 years, Shelton Drum and other organizers of Heroes Aren't Hard to Find have crafted one of the biggest independent cons in the nation.

So how does it stack up against other conventions? And what even makes a great comic book convention? In this review, let's take a look at each aspect of the event, and see what this past weekend's HeroesCon 2014 offered.

The Guests. Sure, we know that events like San Diego Comic-Con International feature Hollywood celebrities, pushing upcoming films and TV shows with panels often bootlegged for YouTube. But for a comic book convention, the caliber of comic book creators is what really makes a difference. Fans of the medium anticipate shaking hands with the writer or artist behind their favorite books. HeroesCon has always garnered major guests (like Stan Lee's appearance in 2012), and this year's HeroesCon provided plenty of big names in the business.

Arthur Adams, Matt Fraction, Mark Waid, Jeff Smith, Jim Starlin and several more — these are some of the names that have driven major past and present narratives in comics. If you didn't mind the long lines, you could have met any of them. Indie Island, placed at the center of Artists Alley (where you'll find comic creators at every convention), brought in folks known for creating works outside of the form's mainstream, superhero-heavy base.

The Panels. Before they were known as Hollywood PR vehicles at the corporate cons, convention panels were simply a chance for fans to hear discussions from the folks behind comics — and to ask questions themselves.

It would be a shame for the HeroesCon panels to go unnoticed, as cosplay and guests seem to take the spotlight at this type of convention. This year's crop featured advice from professionals on creating and self-publishing, Teenage Mutant Ninja Turtles creator Kevin Eastman recounting his path to success, and a discussion about Archer from the TV show's artists. Topic-driven panels included "LGBT Characters in the Comics," "The Weird, Weird West" and "Pulpy Goodness."

The Vendors. Comic shops and vendors from across the U.S. set up at conventions like HeroesCon. And if you're looking for cheap comics, graphic novels, toys and other licensed merchandise, there's no better place (especially on Sunday, when they're trying to unload their stuff before the long trek home).

But for those who were looking for something a little different, the inclusion of vendors like Telegraph: Art & Comics does just that. The Charlottesville, Va.-based gallery commissions unique pieces from artists for a different theme each month, screen-printing works from the likes of Charlotte's Dustin Harbin and Pittsburgh's Jim Rugg.

The Atmosphere. The convention made headlines last week with the public release of its anti-harassment policy. The statement included the warning for those attending the convention, as well as the vendors. They even provided a rating for sponsors, vendors and guests — PG-13 — for content displayed.

The move is less common than you would expect from comic conventions. I've been to several events like this over the years, and I can confirm that the trope of unfriendly, oversexed cons is not fictional. Thankfully, the tide has been turning in recent years, and HeroesCon is part of a greater trend of those pushing approachability and community. A surplus of families at the 2014 event confirms it.

Comic conventions can vary in size, scope, openness and celebrity, and there's room for all of it. But for those looking for a classic convention that pushes boundaries through ideas and execution rather than promises of exclusive footage of next year's movies, HeroesCon should be among others on your to-go list. Just remember to give yourself a budget before you enter the floor.