To prepare for The Dark Knight Rises (reviewed here), here's a look at all the past live-action Bat-films. Ratings are on a 4-star scale. 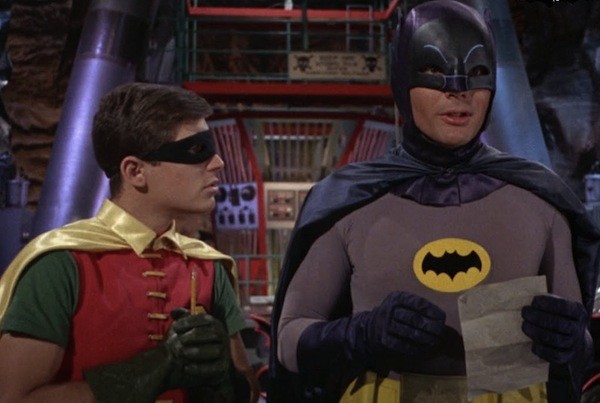 BATMAN (1966). A passing fancy, the campy Batman TV show debuted in January 1966, emerged as a teen favorite and Top 10 series for one year, and then limped its way through a second and final season as its popularity faded fast. Taking advantage of that brief window of opportunity, the show's creators released a theatrical spin-off in which Batman (Adam West) and sidekick Robin (Burt Ward) have their hands full combating the Joker (Cesar Romero), the Riddler (Frank Gorshin), the Penguin (Burgess Meredith) and Catwoman (Lee Meriwether). The clever sequence in which Batman attempts to dispose of a bomb indicates that the filmmakers possessed some smarts, and the battle between the Caped Crusader and a shark is a veritable gut-buster. Still, as a solo viewing experience, this is feeble indeed, but invite some friends over for a BYOB bash and its entertainment value rises substantially. ** 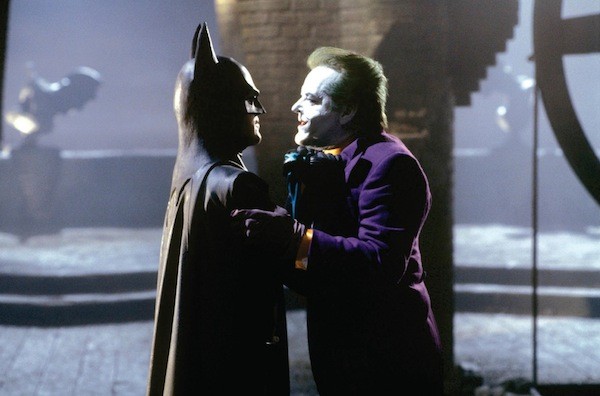 BATMAN (1989). Even though its standing has diminished in the wake of the countless superhero flicks that emerged in the new millennium, the pros still outweigh the cons. Director Tim Burton's quirky sensibilities prove to be a perfect match for this eye-popping yarn in which the Caped Crusader (Michael Keaton) squares off against the Joker (Jack Nicholson). Nicholson's manic performance received all the ink, but Keaton's somber turn is no less noteworthy: He was easily the screen's best Batman/Bruce Wayne until Christian Bale came along. Danny Elfman's terrific score charges the proceedings, while Anton Furst's sets combine the worlds of comic books, film noir and German Expressionism. Furst would go on to win an Oscar for this movie's spectacular art direction before committing suicide in 1991. ***

BATMAN RETURNS (1992). Batman and Burton return for a sequel that retains the original's dark currents while adding some colorful new characters. Danny DeVito is all sputtering malevolence as The Penguin, yet top acting honors go to Michelle Pfeiffer for her sexy and spirited rendition of Catwoman. Pfeiffer's interpretation was so potent, in fact, that there was not only talk of an Oscar nomination (the Academy took the easy route and instead nominated her that year for her dramatic turn in the barely seen Love Field) but also of putting her in her own movie. Sadly, that project never materialized; instead, we were belatedly treated to 2004's Turkey Hall of Fame contender Catwoman, with Halle Berry. ***

BATMAN FOREVER (1995). Joel Schumacher takes over the series from Burton, and the slide begins. Val Kilmer is fairly effective as the new Batman, and the normally bland Chris O'Donnell is better than expected as Robin. But their nemeses are another matter altogether: As The Riddler, Jim Carrey is so buffoonish and over-the-top — and without any of the stabilizing menace Jack Nicholson brought to the Joker — it's impossible to take him seriously as a villain. As for Two-Face, my favorite Batman baddie on the printed page, Tommy Lee Jones makes a complete mockery of the character with a broad performance that's difficult to stomach. Nicole Kidman's on hand, too, but she's wasted as Bruce Wayne's new lady friend. ** 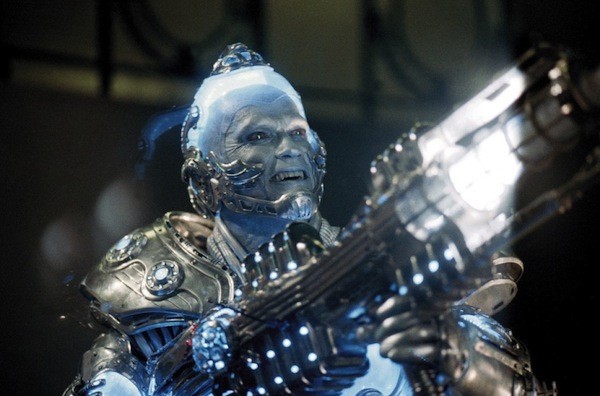 BATMAN & ROBIN (1997). The final nail in the coffin is a complete grotesquerie, a movie that's about as much fun as a 20-year stint in a Turkish prison. Arnold Schwarzenegger (Mr. Freeze) and Uma Thurman (Poison Ivy) are the forgettable villains, George Clooney is deadly dull as Batman/Bruce Wayne, and Alicia Silverstone is an annoying presence as Batgirl. The script is incoherent and inconsequential, and I've seen colonic X-rays more visually appealing than what Schumacher throws up on the screen. *

BATMAN BEGINS (2005). Batman Begins marked the beginning of a beautiful friendship — between the creative forces who resurrected a popular franchise and the fans who felt betrayed when that same franchise went belly up in the late 90s. Never afraid to peer into the darkest recesses of the mind, director Christopher Nolan creates a brooding picture that has as much in common with previous works like Memento and Insomnia as it does with the storied saga of the Caped Crusader. To dismiss this as escapist fare would be to ignore the myriad adult themes that bulk up the picture, issues ranging from the duality of man to the politics of fear. Christian Bale leads a sterling cast that also includes Michael Caine, Morgan Freeman and Liam Neeson; their committed performances help make this that rare blockbuster in which thought often speaks louder than either action or words. ***1/2

THE DARK KNIGHT (2008). Second only to 1978's Superman as the greatest of all comic book adaptations, this might be the first superhero movie that exudes a palpable sense of dread and menace that tugs at our nerves in a way that both disturbs and delights us. Even in superior entertainment like Spider-Man and The Avengers, there's a feeling that it's all make-believe, but The Dark Knight offers no such safety net — it wears its danger on its sleeve. In this outing, Batman (Bale) has done a fine job of tightening the reins around the mob bosses who have long controlled Gotham City, and he's soon aided in his efforts by idealistic district attorney Harvey Dent (Aaron Eckhart). But their combined attempts to corral the city's crooks are hampered by the presence of a murderous psychopath known as the Joker (Heath Ledger in an Oscar-winning performance). Eckhart stands out in what proves to be the picture's most fully realized characterization, though we all know who's the MVP of this particular show: The late Ledger is simply mesmerizing as a whirling dervish of cackling, lip-smacking, cheek-sucking sin. ****