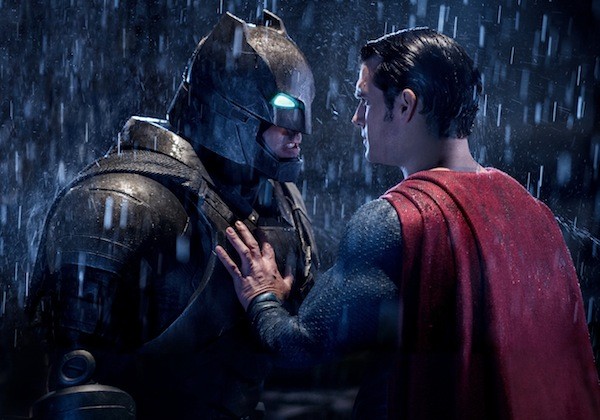 Frenzied fanboys hopped up on hype and hysteria obviously disagreed, but 2013's Man of Steel proved to be one of the worst superhero films to ever swoop onto thousands of screens — not awful in the incompetent way of a Catwoman or a Batman & Robin but rather in the manner of an ambitious movie that swings for the fences, misses by a mile, and ends up in the losing column. For just as there was no joy in Mudville after mighty Casey struck out, so too was there no joy in Metropolis after director Zack Snyder and scripter David S. Goyer got through turning the setting of one of comicdom's most enduring and inspiring superhero sagas into a mausoleum of morbidity, miscues and crippling melancholia.

The good news is that the inevitable follow-up, saddled with the laborious moniker Batman v Superman: Dawn of Justice (the subhead not to be confused with Age of Ultron — or the Age of Aquarius, for that matter), is far better than its predecessor. I wouldn't quite call it a "good" movie, nor would I be able to quite recommend it to anyone but the true believers. To be sure, it's a mess, but it's often a fascinating mess. It's also the most nihilistic superhero picture I've ever seen, so dour and misanthropic that it makes Christopher Nolan's Dark Knight Trilogy suddenly seem as chirpy as that animated Fantastic Four series from the '70s, the one which had the bright idea of replacing The Human Torch with a squat robot named H.E.R.B.I.E.

Still, the nihilism fits this picture better than it did Man of Steel, and that's largely due to the addition of Batman to the proceedings. The film begins by addressing the civilian deaths that racked up during the skirmish between Superman (Henry Cavill) and Zod (Michael Shannon) at the end of MoS, and many civilians and politicians are left wondering whether the son of Krypton is a hero or a villain. The debate is never an entirely convincing one, and it doesn't help that Cavill's granite-face acting makes his character seem less like someone grappling with guilt and more like someone debating whether his indigestion is acute enough to warrant taking an Alka-Seltzer. But Batman's conflicts, on the other hand, feel painfully real. Well-played by Ben Affleck, this Caped Crusader is more sadistic than ever, branding his criminal captives like cattle and inspiring fear even in those he's trying to rescue. He tells his trusted manservant Alfred (Jeremy Irons, predictably cynical) that Superman must be stopped before he morphs into a megalomaniac drunk on his own invincibility, but it's clear that this Batman also wants to remain the only bully trolling the schoolyard.

As the title promises, the two heroes eventually mix it up, all part of a master plan perpetrated by Lex Luthor, a cracked millionaire who doesn't care for either God or the godlike hero who crash-landed on our planet. So much of what is wrong with this picture can be traced directly to the Lex Luthor created by Goyer and co-scripter Chris Terrio (Argo's Oscar-winning scribe). His motivations are feeble, his endgame is murky, and his methods are often daft. Jesse Eisenberg is clearly having fun in the role, but just as it's still difficult to accept that the character Amy Adams is playing is supposed to be Lois Lane (she would have made a better Lana Lang), it's hard to see this twitchy goofball as Luthor — instead, it's more like Richie Rich by way of Heath Ledger's Joker, and about as menacing as a Pomeranian nipping at the heels.

Gal Gadot makes her debut as Wonder Woman, and the only thing certain is that she's fine as WW's alter ego, Diana Prince. As Diana, Gadot has some nice scenes opposite Affleck's Bruce Wayne; as Wonder Woman, it's impossible to say, since her screen time is minimal and she's basically only employed to break ground in preparation for the upcoming Justice League movie.

The final stretch of the film is a chore to endure, as Snyder (as always) shucks aside anything of merit to bombard audiences with relentless and repetitive effects. It's unseemly and unimaginative, right down to a CGI villain (Doomsday) that almost qualifies as a clumsy deus ex machine, a lumbering behemoth that seems to have wandered in from a Hobbit outtake. Not helping matters is the bombastic score by Hans Zimmer, an aural assault that often sounds like a bad tribute band's rendition of Zimmer's Inception theme.

Still, for everything that Batman v Superman flubs, there are those moments when everything clicks. It can be something as simple as Bruce Wayne's greying temples (a nice touch) to something as significant as a sideways glance from Superman, feeling the weight of his failure as his world explodes around him. It can be respect for a person doing the right thing for the right reasons (Holly Hunter as a level-headed Senator) or pity for a person doing the wrong thing for the right reasons (Scoot McNairy as the survivor of this saga's own version of 9/11). Mainly, though, it's the appreciation that this franchise has finally detected a beat that most accommodates its burnished heart of darkness.