Isn't It About Time Douglass Thompson Cut a New Record?

Desperado singing in the rain 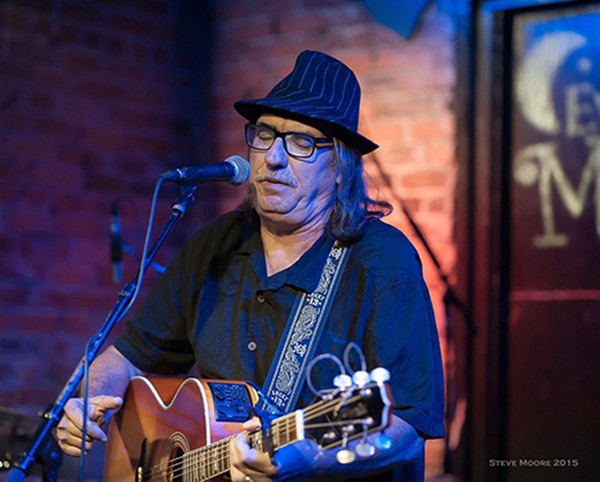 Douglass Thompson at The Evening Muse.

When a housefire scorched Douglass Thompson's home in the tiny town of Waupaca, Wisconsin, in 2012, he and his wife decided to make a change. Everything they'd accumulated over the years was gone, so they took to heart the old Kris Kristofferson line "Freedom's just another word for nothing left to lose," and hit the road.

"I had a friend here in Charlotte who offered us his place," Thompson says. "He asked if we wanted to house-sit for him for a couple of years, so we said, 'Sure. We're older now, let's take one last adventure.'" 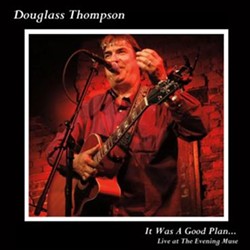 The adventure led 61-year-old Thompson, who'd been a songwriter practically all his life, to Charlotte's rich singer-songwriter scene. He'd spent time in the late '70s in the singer-songwriter capital of the world — Austin, Texas — where he rubbed shoulders with greats like Townes Van Zandt, Guy Clark and Butch Hancock. In Charlotte, Thompson fell in with Queen City greats like David Childers, Mike Strauss and Rick Spreitzer. In 2014, another local troubadour, Chuck Johnson, encouraged Thompson to do an album, which resulted in It Was a Good Plan... Live at the Evening Muse.

Recorded one rainy night in NoDa, the 13-song album includes such miniature works of musical literature as "Just Like Anastasia," "The Day Spade Cooley Died" and "Peckinpah and Ford." More recently, "Promise to the Wind," a song Thompson co-wrote with Childers, wound up on Childers' 2017 album Run Skeleton Run.

We caught up with Thompson, who performs January 12 at Catawba Coffee, to see if he plans a follow-up to that terrific set of songs that one local radio guy described as a collection of "three-minute novels."

Creative Loafing: How did the Evening Muse album come about?

Douglass Thompson: You know, I have a granddaughter and I wanted to leave something, so I thought, "Let me at least do one album. I think I have one album in me." I knew I wasn't going to make any money from it, but I wanted to do it. So I called up [tmusician and producer] Eric Lovell, who I really wanted to work with, but he didn't answer my calls. He's a busy guy and he didn't know who I was, so...

Chuck Johnson said, "Let me call him." Well, the very next day Eric got back to me. I needed a reference, I guess. He was very skeptical at first. He said, "What you got?" And I put down 15 songs, sat in his studio and he recorded them and told me, "That's a lot of songs — we'll probably only do eight or 10." I said, "Yeah, I understand." He said, "I'm going to listen to these and then let you know what I think." Well, the next day he calls me and says, "Hey, let's do all 15." [laughs] That made me feel pretty good.

We ended up doing. His wife Gigi [Dover, another local music luminary] sang on several of the songs. Eric played guitar, and he got Rick Blackwell [of the Monday Night Allstars] to play bass. It was a fun afternoon — pouring rain, a really nasty storm, but we filled the Muse and people seemed to like it.

Do you have a second collection in you?

I definitely do. I've got so many new tunes. Everything that's on that first album was written before I moved to Charlotte. A lot of them go back to the '90s. My plan is to do a very stripped-down collection next time. Just me and an acoustic guitar. I don't really need drums and full instrumentation for what I do. I'm just telling stories. And I know so many great guitar players who have been encouraging. So I'm thinking of doing between eight and 12 tracks, mostly with just one other guitarist or a harmonica player. I'd like to have it out by Christmas.

One of my favorite songs on the live set is "Peckinpah and Ford," about the two western film directors. Why did you write about them?

I'm a lifelong fan of westerns, and when I was in my 20s I did some scholarly stuff on them, just reading about the two directors and what they did. To me, they were like Bob Dylan and John Prine in folk music — they took this old genre and made it fresh and real, giving it something to say, using it as an artform and not just a time-suck.

My character in the song is like a young film director, finding lots of problems on the set and saying, "What would Peckinpah do? What would Ford do?" I knocked it out pretty quickly but didn't play it for anyone, because I just thought it was just too weird and personal for anybody to relate to. Then when I did start playing it, it was everybody's favorite song of mine. It's just one of those situations where you write a song and you don't really consider playing it because it's too personal, and then people wind up loving it. I guess it's the theme — the struggle to create. That's kind of universal.

Watch Thompson perform "Peckinpah and Ford" at the Muse.