It's Make-or-Break Time for Moving Poets

Company's fate could rest on Johannesburg 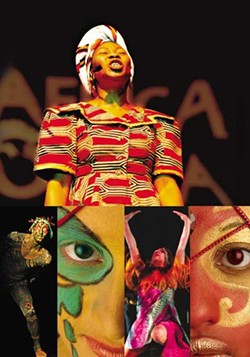 Gcina Mhlophe has won international acclaim for her acting in films, and she's been a featured actress onstage at Lincoln Center. She has sung with the London Philharmonic and with Ladysmith Black Mambazo. She has authored acclaimed poetry and children's books while winning the reputation as South Africa's greatest storyteller.

Mhlophe has written new stories for Johannesburg, more than holding up her end in the ongoing "South by South Africa: Crafting Cultural Understanding" project being staged across the metro region from January through June. Playwright James McLure, famed for Lone Star and Pvt. Wars, will take care of the Deep South with five new scenes that he's written for the project.

So Mhlophe's mesmerizing presence onstage at McGlohon Theatre will be augmented by such actors as Randell Haynes and Katherine Harrison, longtime Charlotte Rep stalwarts, as McLure digs satirically into the South. Of course, you also can expect original choreography from Poets founder Till Schmidt-Rimpler.

Still, it's Mhlophe who figures to make the deepest impression in this cultural exchange.

"I saw her in Germany, and I was totally blown away," says Schmidt-Rimpler. "Like this was one of the five best performances I've ever seen on stage."

As soon as he first saw Mhlophe live, Schmidt-Rimpler remembers instantly wanting to involve her in new Moving Poets productions, which typically fuse dance, drama, multimedia, music, and even sculpture. Reaching for the moon? There was something of a precedent in 2002 when Moving Poets brought Nobel Prize-winning playwright Wole Soyinka to Spirit Square for their presentation of The Echo.

Schmidt-Rimpler was able to forge a connection.

"I was lucky enough that her agent is an old friend of mine," Schmidt-Rimpler reveals. "So I met her through him, and she saw one of our videos from a [Moving Poets] show. And she liked it very much and said, 'Well, we'll see when we can do this.'"

Opportunity knocked when former Arts & Science Council president Harriet Sanford launched the "South by South Africa" project. Knowing the Poets' work -- including the Soyinka coup -- Sanford came to Schmidt-Rimpler and asked whether he had an idea for a production that his company could contribute. Did he ever.

Bringing Mhlophe and McLure together, Moving Poets has created a South-South Africa fusion that no other ASC performing arts company has come close to matching. It's a totally original creation that the ASC can point to with pride as a cornerstone of the "South by South Africa" project, uniquely validating and fulfilling the ambitious concept.

Or so you would think.

No special publicity on Mhlophe or Johannesburg Stories has reached us from ASC's palatial offices. Nor is there marquee prominence to either the Moving Poets production or Mhlophe at the southbysouthafrica.org website. Schmidt-Rimpler's brilliant brainchild is buried amid the other nine groups that are participating -- with varying degrees of relevance and significance -- in the project.

Unfortunately, that lack of appreciation for the value of creative artists fairly well typifies ASC's lukewarm support of Moving Poets -- and other small arts groups around town populated by artists rather than administrators. After nine years of trying to make headway against an inflexible system -- and inflexible attitudes -- Moving Poets is on the brink of collapse.

Schmidt-Rimpler is fed up with having to pass along the ASC's disregard for professional artists to the fine regional, national, and world-class artists who bring life to the Moving Poets' unique synthesis of the performing and visual arts. That's why he moved last fall's Seven Deadly Sins out of Booth Playhouse, where he couldn't afford the rental. That's why he cancelled last fall's Holiday 6/15, a potpourri of short multimedia originals that, in a previous edition, won CL's award as the edgiest arts event in town.

And that's why Mhlophe, McLure, and the Rep refugees have become the centerpiece of a last-ditch effort to put Moving Poets on a secure footing.

"If you just pay your dues for so many years, there needs to be a point where you have enough support, funding, and staff that allows you to do the work without burning everybody else out," Schmidt-Rimpler avows. "Artists just have to be able to get paid properly."

Poets sent out their SOS in early January, urging more of their loyal patrons to be more generous with their support. Early response has been encouraging. Donations are up, and the PAC is helping out "bigtime," according to Schmidt-Rimpler, in making McGlohon available to the struggling troupe.

Last week, a couple of activist Moving Poets patrons swung into action. One of them sought to verify, via email, CL's support for the beleaguered company. The other asked for answers from current ASC president Lee Keesler.

After praising the Council for its support of mainstream arts organizations, the writer tells Keesler, "I don't understand why more money can't be allocated to fringe and performance art groups with proven track records. If Charlotte is to have the vibrant arts community that a city of her size should have, then the Arts & Science Council must do more to nurture and develop our most talented, see that they get the exposure they deserve and keep them here."

Schmidt-Rimpler faults the system, beginning with the reality that potential donors around town have come to believe that the ASC was set up to provide everything to everybody. But there are pernicious problems within the ASC, according to the Poets founder. These include an ingrained belief that one theater, one opera, one symphony, and one dance company are all that Charlotte can support.

Forget about all the efforts to proliferate sports teams and museums around town, says Schmidt-Rimpler, when it comes to arts organizations, those with ASC influence believe in regulating the market, stifling competition, and protecting special interests.

Ironically, Schmidt-Rimpler and his Poets would love to take the burden of funding off the ASC's shoulders. But that can only happen when the organization is nurtured enough to grow beyond its paltry full-time staff of two.

"Moving Poets clearly is an artist-driven company," says Schmidt-Rimpler, citing the chief obstacle. "I have a severe doubt -- and that goes through the Arts and Science Council profoundly -- that there's any true respect for the professional artist in the sense that they've actually got to make a living."

The success of Johannesburg Stories and concurrent fundraising efforts could give Moving Poets its place in the sun at last. Otherwise, it's a place on the slab next to Charlotte Rep and Charlotte Shakespeare.