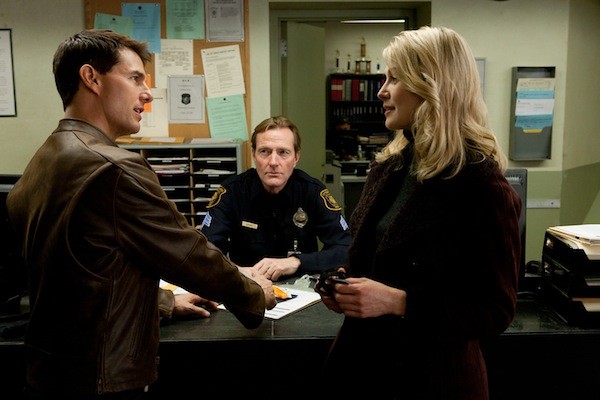 With Tom Cruise whipping off his shirt and flexing his muscles with all the eager-to-please zestiness of Taylor Lautner doing likewise in the Twilight franchise, it's clear that Jack Reacher is a vanity project of the highest order. But it's also a movie full of pleasant surprises, not the least being a key supporting role for German director Werner Herzog (Aguirre: The Wrath of God, Grizzly Man) — perhaps not since Roman Polanski turned up in Rush Hour 3 as a Parisian policeman fond of ordering anal probes on prisoners has a great European filmmaker popped up in so unlikely a place.

Thankfully, Jack Reacher is no cinematic cesspool like the third Rush Hour romp; instead, this adaptation of Lee Child's One Shot is more intelligent than most of the daft murder-mysteries appearing on screen, with the protagonists actually involved in some genuine sleuthing rather than having all the clues conveniently dropping into their laps or cracking the case through some ludicrous coincidences. The thrust here is that a former army sniper (Joseph Sikora) stands accused of killing five random people (yes, the opening sequence featuring the shootings is indeed unsettling), and only Jack Reacher (Cruise), an ex-military investigator living off society's radar, can prove his innocence. But the movie's twists begin right away, with the revelation that Reacher appears on the scene ready to "bury" the man, not set him free. From here, the movie refreshingly takes its time laying out the requisite groundwork in terms of characters and conspiracies (but takes too much time on a car chase that's well-executed but nevertheless overstays its welcome), with such figures as a defense lawyer (Rosamund Pike), her district attorney dad (Richard Jenkins) and a shooting-range owner (Robert Duvall) impacting the proceedings.

While the Mission: Impossible yarns continue to roll along (a fifth is due in 2015), it's likely that Cruise also views this as a potential franchise. If that's the case, there's certainly plenty of material: Child has written 17 Jack Reacher books so far, meaning Cruise can keep playing this guy until they pry the script from his cold, dead hands.

Jack Reacher is not showing in any theaters in the area.