The horrific shooting of nine parishioners by a white supremacist in Charleston's Emanuel African Methodist Episcopal Church on June 17, 2015, left the entire country stunned, forcing us to confront ghosts that many preferred to leave alone.

For Jeremy Davis, a native of Summerville, South Carolina, and the leader of the Charlotte band Elonzo Wesley, it put him in a place so personal and so raw that he had no choice but to write his way out. The result was "Emanuel," one of the best songs on Elonzo Wesley's newest album Spec, released in November on the Concord-based Silent Uproar label, the home of Sinners & Saints and the Avett Brothers' early rock incarnation, Nemo.

"Emanuel" merges the dirge-like brooding of John Lennon's "Working Class Hero" with the lyrical immediacy of Neil Young's "Ohio," about the Kent State shootings of 1970. With his weary gentle vocals, Davis, 36, manages to evoke a detached, almost beatific aura of the tragedy while hammering home the emotional damage and the tragic cycle of violence. He ties in the shooting with the tragic fate of the church's founder, the former slave-turned-activist Denmark Vessey. While every song on Spec is a gem, in "Emanuel," Davis displays a deep knowledge of history, a mastery of songcraft and a rare ability to tie it all together into powerful storytelling.

Spec is not so much a departure as an evolution for Davis and his band. It's indie rock with Appalachian colors. It's bluegrass instruments telling modern tales. The reaction has been overwhelmingly positive, and Elonzo Wesley will be taking the songs on the road, starting with a show at the Evening Muse on February 16, where the band will share the bill with Yes Ma'am.

We recently sat down with Davis and talked to him about the song, the album, his feelings on Southern racism and religion, and his evolving creative process.

Creative Loafing: "Emanuel" is one of the standout tracks on the new album. Can you talk a little bit about it?

Jeremy Davis: It's hard, of course, because it was such a horrible event. I wrote the song a few weeks after the shooting. I was traveling and staying at a Motel 6 in Tennessee. I just woke up suddenly and that song came in a few minutes. I think I had fallen asleep with the news on and the shooting was all over everything at that time, but it was one of those songs that just comes to you.

I sat on it until this record, because I felt weird about releasing it [then]. The whole thing, especially being from the Charleston area, made me so upset. As a South Carolinian, the shooting raised a conversation in South Carolina about the [Confederate] flag, and brought up a lot of stuff that, for me, is very close to home, growing up in South Carolina and being around certain viewpoints. The whole dichotomy of the South, slavery, the church where the shooting happened and the history of that place and the irony of Christianity and how it's completely a part of the whole mess.

The new album, Spec, is indie rock, but it uses traditional Appalachian instrumentation. How did you arrive at this approach?

Well my first group [Elonzo], I wrote all the songs for. You could have called it Americana, but it had drums and electric guitars, keyboards. A typical rock set-up. I loved playing with that band but I felt that some of the more subtle things about the music and the songs that I was writing just didn't come across in the live setting.

The natural instinct of a rock band is to rock, right? (laughs) You wanna get up there and be kind of aggressive with it. So that band broke up and I was playing solo for awhile, and that's when I started Elonzo Wesley. It was initially a solo project. I always had this idea that my songs were indie in the style of experimentation with the melodies, so I'm not trying to sound traditional, but I am coming from an Americana point of view, if that makes sense. 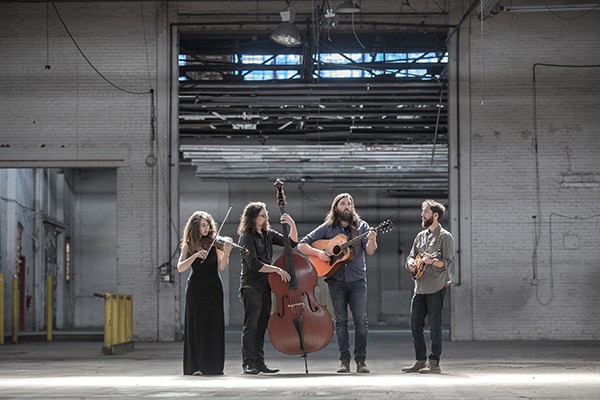 I'm not seeing any other bands taking bluegrass instrumentation and playing these kind of songs. Usually acoustic bands like this are playing more traditional songs. I like that music, but I want to do something different with it. We can be a high-energy band, but in a different way.

The style of the writing is more personal than traditional. It feels more influenced by the classic songwriters of the late 20th Century, starting with Bob Dylan. Are you an autobiographical kind of writer?

I grew up with my mom showing me a lot of music: Beatles, Dylan, Paul Simon, Neil Young. I heard Bob Dylan just as I was learning how to play guitar, and that approach was just burned into my head.

These are my stories, in musical form, definitely. Not always 100-percent autobiography or whatever, but I wouldn't want it to be. I think when you, as the listener, can feel that personal attachment, even if you don't understand the story, it gives you the opportunity to make it personal for yourself. At least it does in my case, when I listen to other peoples music.

Do you find it hard to stay creative in today's climate, with the speed and the ugliness of the public discourse online? How do you keep going?

It does affect me for sure — my everyday outlook on things — and probably for the negative a lot of the time. On the flip side of that, playing music and being creative is one of the only things that really brings me joy. So it makes me want to push harder to be more creative.

Jesse Stockton, a guy we played music with in Wilmington, said, "Music is medicine for people," which sounds like it belongs on a poster somewhere; but without being cliché, it's still true. People go to shows because they want to escape from whatever it is they're dealing with. I like that idea, and music is definitely a place where I can get a release from whatever else is happening.

How's the reception for Spec been so far, and what are your plans for the band?

I think it's been really good. We've just kind of grown naturally to where we are now, and people are always asking us to do other things, so we're getting busier and busier. We're playing the Whitewater Center in April; I think [the Charleston indie-rock band] Susto is playing that night. We're looking to book shows further west and farther up north this year.

Every time I tried to gear up for a tour in the past, the logistics didn't make sense, but I'm thinking now's the time. This is the band I've wanted for like, forever, and with this new record, it's time to get out there.