"My mother named me after Cory Wells, who was the singer of Three Dog Night," Wells reveals, adding that his mother was a huge fan of the soulful harmony-slinging pop trio who topped the charts in the 1970s with hits like "Joy to the World," and "Mama Told Me (Not to Come)." But the story gets better, Wells promises.

"My mother was actually at [a Three Dog Night] concert while she was pregnant with me," he continues. Wells' mother Coco Wells, who is a formidable songwriter in her own right, met her idol, the band's lead singer, at the show.

"Cory Wells actually rubbed her belly and said, 'That's going to be a musician,'" Wells says. "And lo and behold here I am." In the course of 15 years on the Charlotte music scene, Wells has fulfilled the elder Wells' prediction, but it hasn't been a smooth ascent to the top. In fact, Wells will be performing his final Charlotte show at Evening Muse on August 25. After the farewell gig, Wells will tour out west for a month, and then he'll settle down in Colorado to be close to family. Wells' brother and mother both live in the Centennial State. 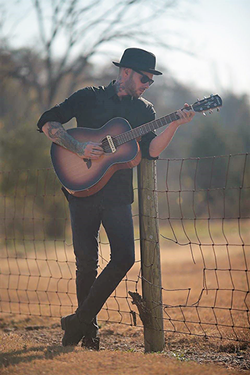 It will be a bittersweet goodbye. Charlotte is where Wells launched his music career as a 17-year-old contestant on the Queen City Idol competition, and with the release of his latest EP, Out of the Dark, Wells shows that he's at the peak of his powers as a darkly romantic tunesmith who cuts to the emotional core of the obsessions and dreams that make us tick, but he feels the Q.C. is no longer the best place to nurture his talent and ambition.

"Charlotte is a very corporate town," Wells says. "It's more about cover artists in bars, than it is about original music venues."

He's is quick to praise venues like the Muse, artist-supporting neighborhoods like Plaza Midwood and Noda, and talent like Catalyst Recording's Rob Tavaglione, who engineered and co-produced Out of the Dark. But he also notes Charlotte's propensity for tearing down the venues and cultural hotspots that bring people here in the first place. Past tours have exposed him to venues and local scenes out west, and the fit seems right for where Wells' music is heading.

"I think there is a broader spectrum of art out there," he continues, "and a more eclectic vibe."

Born in New Orleans, Wells had a musical yet tumultuous upbringing. The family was constantly on the move, and Wells figures he lived in eight or nine states while he was growing up. Complementing her songwriting background, Coco Wells had married a radio disc jockey. At the age of 25 Cory discovered that the man he called dad was not his father. Wells says he met his biological father just one time. His stepfather turned out to be abusive, and by the time Wells was 12 years old he was being mistreated physically and verbally on a regular bases. Wells started acting out, and he was placed in two different group homes. He credits music for getting him through his trials and tribulations.

"Songwriting was the only thing where I felt I could be 100 percent honest with myself," Wells remembers. He started writing songs at 13. At 15 he taught himself to play guitar. Piano soon followed. He was an orchestra kid, playing violin in middle school and alto saxophone in high school. Through it all, his mother, who divorced Well's stepfather, was Cory's guiding light.

"My mother was, still is, and always will be my biggest inspiration," Wells maintains. "She has always been the strongest person I've ever known." In her music career, Coco Wells has won the grand prize for songwriting by the Houston Chronicle and the Top 10% Award for lyrical content on her song "Change of Heart" issued by the Nashville Songwriters Association International. Last year, she joined her son onstage to perform a few of her songs.

"She's trying to pass her songs onto me now," Wells says, laughing. He's currently planning on covering her composition "Once in a Lifetime." Coco also came up with the name for Cory's debut musical venture, the duo Jacobs Well, a collaboration between the 17-year-old Wells and a singer named Scott Jacobs. At a long-since shuttered Charlotte venue called Club Crush, Jacobs Well vied for first place in the citywide Queen City Idol competition. Though the duo was technically too young to be in the club, they won the contest hands down. 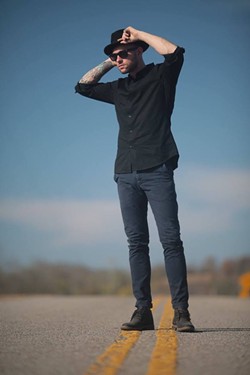 Wells' music career was off and running. Two years later, Wells, along with drummer Austin Creech and bassist Dave Piontek, formed the hard rock band Manic. Within a year, the group was packing houses at Amos' Southend, but all was not well with Manic. Wells and Piontek grew disenchanted with the band's psychedelic hip-hop influenced hard rock. Deciding to take their music in an alternative pop direction, the pair formed Falling Through April. The band is currently signed and doing well, Wells says, but his muse eventually pulled him towards a solo career, and he left Falling Through April in 2014. In 2015, Wells launched his solo career, but not as Cory Wells or Cory M. Wells. He found that his moniker was a liability with audiences because they confused him with his namesake, the legendary lead singer for Three Dog Night. So he released the EP The New Old as Subliminal Confession.

"I felt Subliminal Confession was the best description for my music," Wells explains. Coming off the six or seven years of the grinding hard rock lifestyle, he was ready for a change. Wells relished the opportunity to explore the more poetic and melodic side of his personality and music. Though he doesn't regret rocking out, he feels there is room for all forms of musical expression. "Every kind of music is effective if you write it and deliver it properly." Despite Wells' effective delivery, audiences never took to the name Subliminal Confession.

"It was kind of hard to remember," Wells says, adding that people would describe his concerts as a Cory Wells show no matter what he called it. So a few years back, Wells ditched the descriptive moniker, and started billing himself as Cory M. Wells to differentiate himself from Three Dog Night's now-deceased Cory Wells. Released last March, Wells' video for his song "Running Wild" can be seen as a signpost for his current musical direction as he prepares to leave the town that has nurtured his career. Shot last October in Spartanburg, South Carolina, the video depicts Wells playing solo guitar on a rugged yet bucolic riverbank as he sings about coping with a long distance relationship.

"The message is that just because you're not physically at home, you can still feel at home," Wells explains. "If you close your eyes and use your imagination, you can still feel the warm feeling of home." It's a fitting message from — and for — Wells as he prepares to make the road his home as he heads for points west.