I met Julia Simon in her company kitchen in southeast Charlotte on a Saturday morning, just as she finished getting a group of about four employees prepped for the day's work. What's the work, you ask? Just to cook about 50 pounds of casserole, for one.

Simon i s the founder of Nourish Charlotte, a 100-percent vegan and gluten-free food delivery service. Her and her 12 employees spend every Friday prepping an ungodly amount of ingredients for the Saturday cook. On Monday and Tuesday, they hit the streets to deliver around 100 custom-made orders to Charlotte-area vegans.

Simon, a vegan since being exposed to the effects of factory farming by the folks in Food Not Bombs at age 13, founded Nourish as a way to help cultivate the growing popularity of veganism among those who may be too busy to locate and cook the right style of food on a daily basis.

"Charlotte was a place where I feel like the kind of food I love to make and I love to eat, there wasn't very much of it," said Simon, a graduate of the National Gourmet Institute in New York City.

She began a blog called No Faceplate, which became popular among Charlotte's ever-growing vegan crowd.

"I feel like a lot of this is Northerners or people who aren't native Charlotteans coming from other places and kind of looking for this kind of food; light, planet-aware, locally aware, organic food."

Simon had always planned on opening up a business of some sort in Charlotte, so launching one aimed at catering to that crowd was the logical next step.

Nourish Charlotte turns 5 next month, so Creative Loafing dropped by the office last weekend to see what's been cooking over that half-decade and what big plans are in store (literally) for the future.

Creative Loafing: How have things changed for you in the five years you've been in business?

Julia Simon: When we launched we were one of three meal delivery services in Charlotte, so that was kind of a new niche at the time. People didn't want to go out to eat, didn't want to get take out and wanted healthier options than maybe were available from the cold bar at Harris Teeter. These are busy people that do not have the time to cook but are somewhat health aware. And so that niche market was born. There are now, by my count, 14 meal delivery services. So we've held our ground, but growth has definitely been an effort. We're still the only 100-percent vegan, 100-percent gluten free, but it's been interesting to watch that explode here. I think we've done a pretty good job. We now ship statewide, to kind of open the market up a little bit. But it's been a surprise to see it explode so quickly. The first two years we were in business, we grew by hundreds of percents each year because there wasn't much else around. But holding our ground since then has definitely taken some marketing effort.

[Saturday] is our big cook day. So Fridays we do a lot of vegetable chopping, we do a lot of slicing and cutting and getting everything ready. Saturday we do most of the cooking, so we'll make 50 pounds of lasagna, we'll make a ton of soups. Today, we're doing a "TuNo" noodle casserole, so instead of tuna fish and a creamy sauce like your grandma used to make, we're doing our TuNo salad, which is chickpea-based, and doing a beautiful cream of mushroom that's been creamed with cashews to set the casserole with brown rice pasta and topping it with cashew parmesan. We are making 110 servings of TuNo noodle, so probably about 50 pounds of stuff, and then that gets packaged with a little side order of broccoli.

We do soups, we do salads, we do breakfasts. We just launched a seeded milk, so we'll do these beautiful nut or seed milks that you can use as a dairy alternative and those are available on our menu. We do smoothies. We do raw, dehydrated cereals and granolas. We do all kinds of things.

What are some favorites for you in the kitchen?

I'll tell you why we do things like lasagna. Did I envision making lasagna every week as a chef? No. But I do love making our lasagnas because I know they're one of the best arguments out there for how delicious and stick-to-your-ribs and comforting vegan food can be. And I think we're still having that conversation a lot in Charlotte. People are far more aware than they were five years ago, but it's still uncomfortable for some. I love that we can catch them when they're curious, and show them beautiful things and tantalize their taste buds and really satisfy them.

When you look at the margins for Nourish, it does not line up with normal restaurant margins; it just doesn't. We spend a ton of money on food. When I tell other restaurant owners how much our food spend is, their jaws just drop. Because organic produce is very expensive, and we try to support local farms the best we can. It would be much cheaper for us to have a US Foods account and just get everything crated from wherever it comes from, but we try very, very hard to hold to our nutritional standards when we buy produce and that just means we spend a lot.

Then we also spend a lot on payroll, because there's very little on the market that I'm comfortable with us purchasing. So everything is made in house except for miso and mustard. We do vegetable stocks from scratch. All of our cheeses that we make, we make in house. The reason that we go to the trouble of making seed milk every week is because there's nothing on the market that I'm comfortable using. I don't like shelf stabilizers. I think you can do better for your body and that's part of the reason why we're here and why we spend the time to do that.

How do you go about making seed milk?

You rinse and soak organic seeds — we like sunflower and pepita seeds because they have a lot of iron and folate and things that vegans might have a harder time coming by — and then you basically use a variety of different organic flavorings. We like to sweeten ours with organic dates and a little bit of organic vanilla and a little bit of sea salt, and then you basically just puree and strain. You have to use these very, very fine mesh bags and just get in there and milk the nut, milk the seeds. 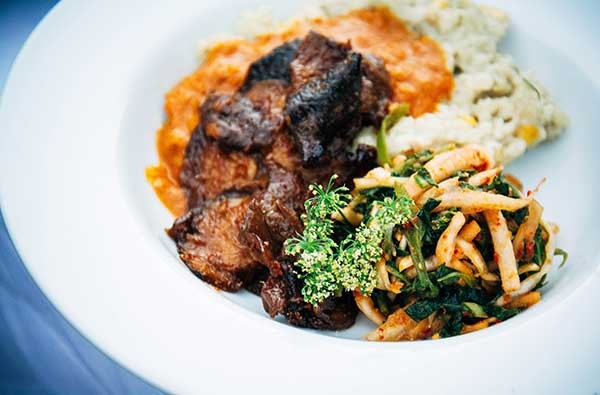 As far as businesses, how have you seen the availability for vegan foods grow in your time here?

We're still on a wave that started about when Nourish launched five or six years ago. Elle Erickson was running a cleanse called Three Weeks to Wellness. I know everybody because all of us were either part of that or chefs for that, and some of us were in super start-up mode around that time, too. A lot of bits and pieces of the vegan community — Viva Raw who we share this kitchen with, for example — started and did a lot of work at the beginning with the people doing these cleanses. So I feel like that's the wave that we're riding right now, and those are established businesses that are mid-sized to small. Then there's this new wave of Move That Dough [Baking Co.], Tephra, Terra Flora; a couple of pop-up people who are kind of just getting into it. And then there are operations like Luna's or Fern that are a little older and even more established than us mid-sized businesses. So there's an interesting graduation process that I feel like the vegan community is going through in town.

I would say this about the vegan community, it's pretty tightly knit. If you're not supportive of each other, there's really not room for you. That's really beautiful. I think as it's grown, and I'm very proud of us, we tend to be very supportive of each other. It's very anti-capitalist. It ends up being a lot of scratching each other's backs or, "Do you have any of this?" or "I need a little space to cook something, do you mind?" It's very back and forth, very shared resources and I think despite it growing 500 percent over the last few years we've maintained that kind of friendship and camaraderie and community, and I'm very proud of that.

What are your plans moving forward?

We're talking about moving into a retail space and diversifying this year because it seems like that's the path for us. I think our food would do beautifully on a plate in a place. When we package stuff, we basically trust that the customer is not just sticking everything in the microwave and hitting 3 minutes. We have all these precise reheating instructions so that it's as delicious as can be, but we don't know if they're following them.

So you would be serving food, then, like a restaurant?

Yeah, but we're not going for like a five-star restaurant. We want something beautiful and comfortable well-designed but not pretentious. I think what we try to shoot for with Nourish is incredibly gorgeous food that makes you feel very nourished and is beautifully sourced and is extremely ethically put together that nourishes people that work here, our local economy and local farmers. We have this big vision but we don't want to make that vision unapproachable, and that's the whole point.

How far along is your vision, here?

I see it well-lit. I see beautiful sunlight trickling in. I see a relatively minimal front of house. I don't think we're ready for a huge operation. We've got beautiful people on staff that are comfortable on the line and that will be the learning curve — so a small, casual café. We're still in the investor phase and talking to people that want to give us money. So once we know what we have then we'll now exactly what we can do.

Do you have a location in mind?

We're looking at Elizabeth and there are a couple other neighborhoods that I think are underserved with vegan food. I think South End is pretty saturated. Plaza Midwood is just expensive. So we'll see where we end up.

You have a pop-up collabo dinner with Tephra on March 15. What can folks expect there?

Shawn Harrison is Tephra, and he actually just moved to Savannah to open up Savannah's first vegan café, but he's just a friend of mine, a cohort. I just love Sean's food. I believe in Sean, I think his food is lovely and I think it pairs beautifully with what we do, too. So much so that we're not just going to do where he takes a course and I take a course. We're going to share the main course which is typically not done. Chefs are a little weird about sharing plates. But especially since we're going to cook together in this kitchen in the days leading up to the event, I know we can figure it out and I'm sure it will be fabulous and delicious.