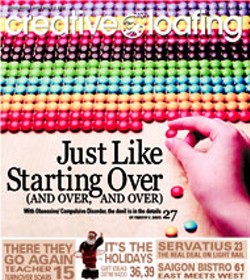 But this month sees the release of the most anticipated OCD-themed representation of all time -- as well as the most medically accurate -- The Aviator, starring Leonardo DiCaprio as pilot and magnate Howard Hughes.

Dr. Jeffrey Schwartz, Research Professor of Psychiatry at the UCLA School of Medicine, has authored three popular books with HarperCollins, Brain Lock: Free Yourself From Obsessive-Compulsive Behavior (still considered the seminal text on OCD), The Mind and the Brain: Neuroplasticity and the Power of Mental Force, and Dear Patrick: Letters to a Young Man. Schwartz was recently hired by director Martin Scorsese as an OCD consultant for The Aviator, in hopes of portraying Hughes' legendary case of OCD in the most realistic light possible.

"In Europe, I hear more stories about them presenting (OCD) in a way where it's less than sympathetic -- where the people are treated as freaks, basically," says Schwartz.

"This film is an extremely good portrayal of what an unchecked case of OCD can be like. Howard Hughes' life was completely devastated by OCD, so you're probably going to see for the first time what it's really like. They gave me a lot of time and access. I went over the entire script line for line with Martin Scorsese and Leonardo DiCaprio, and Leonardo and I spent a lot of time together over several months getting the details of OCD accurately. In no way can I claim I'm unbiased, but I think it's as good a portrayal of mental illness as has ever been done in cinema."

Book publishers have begun to see the comedic and narrative possibilities of portraying the OCD experience, too. Motherless Brooklyn, a novel by award-winning author Jonathan Lethem, is a mystery novel featuring a detective with Tourette Syndrome and accompanying OCD. Steve Martin's The Pleasure of My Company is a lighthearted novella about Daniel Pecan Cambridge, "a savant whose closely proscribed world is bounded on every side by neuroses and obsessions."

Jennifer Traig, an author and contributor to magazines like McSweeney's and others, recently penned what may be the first OCD memoir. Entitled Devil in the Details, it's a look at Traig's lifelong battle with OCD, as well as a memoir of growing up with a disorder few people had taken the time to understand.

"My case was crippling for a year or two," says Traig. "I know people where it's ruined their lives. But I guess since I'm somewhat over it, I do find it funny. I don't object to them (the media) using it as comic fodder. But the one thing I do object to is this -- someone like Monk doesn't have just one compulsion. He has every compulsion. You either count or you tap -- you don't have both. But I do think (the coverage) sort of defangs the whole thing and makes it a little less scary."

Traig's particular battle was with a substrata of OCD called "scrupulosity": in essence, a religious-based compulsion that might well be the most powerful form of the disease, as well as the most common. Didn't check the door lock 10 times? No biggie -- the worst that can happen is a few things get stolen. Maybe you have to cancel your credit cards and change your locks.

Screw up with your scrupulosity, and people could die.

Having grown up in a Catholic family, scrupulosity (the religious take on OCD) was a natural for me. My brother and I used to hold "pretend Mass," with him reading from a children's Bible and serving a Eucharistic snack of cherry Kool-Aid and saltine crackers. I never missed a Sunday. Real-life confession to a priest was particularly engaging. I'd go in, maybe mention that I'd lied to my parents or lusted after another kid's gal. I'd sit quietly, and then wait for my resolution. "What's that? Say 100 "Hail Marys'? No problem!" (Sometimes I'd go over by a few, just to be sure.)

Going to sleep at night, I'd include all my family members and friends in prayers -- as well as their pets -- all by name. If I ever felt a lapse in concentration while reciting this laundry list, I'd start over from scratch. When finished, I would say the sign of the cross -- Father, Son, Holy Spirit -- while trying to visualize each particular component (which is, of course, impossible, but it didn't stop me from trying). I would then do a series of small crosses on my forehead, lips, and chest, of the type seen during Eucharistic preparation. At first, I'd do seven of these, as seven was said to be "God's number." Later on, I decided I might be better off squaring the whole thing, which led me to doing 49 series of forehead / lip / chest touches. (That's 147 total crosses, for you "counters" out there. You know who you are.) By this time, I was usually too tired to care, and would doze off. Some aren't so lucky.