Larkin Duran is keeping the reins at Lupie's Cafe

Staying in the loop

When Lupie Duran, owner of Lupie's Café in east Charlotte, broke both ankles in an accident early in 2015, it was time for her daughter Larkin Duran to step up and run things for a while.

In the following months, as Lupie recovered, she realized that her daughter was handling things well enough on her own. It makes sense, since life in the 30-year-old diner has been the only life Larkin, 31, has known.

Once she fully recovered, Lupie decided she could retire from the daily grind of running two restaurants — there's also a 14-year-old location in Huntersville — and leave Larkin at the helm.

Creative Loafing sat with Larkin in the original Monroe Road location recently to discuss how things have gone since she made the move from Huntersville, where she had been managing for years and still splits her time twice a week, to the flagship on the curve just east of Uptown (at least two folks have driven through the front of the shop. Watch out, would ya, drivers?). 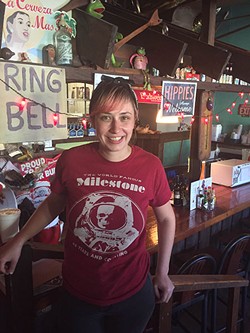 Creative Loafing: How have you been taking to life in charge and at a new location?

Charlotte is like a totally different world than Huntersville. At first it was a little weird, it was kind of hard because it was a snap decision. I actually like it a little bit more now. I feel like people — I don't know if it's just because this place has been here longer — but there's just a whole different type of demographic here. We get every kind of person that comes in here to eat and it's fun to get to meet different people and interact with them.

My mom's always created this really awesome environment. It's a fun workplace. It's definitely not easy. The restaurant business in general is not easy. But the people that work here, we've all worked together for so long, we have a very low turnover rate, and we've gone through good times and bad times together. It's just a really unique place. There's not any other place I've been to that has the same environment. I definitely admire my mom for what she's created and hope – I have huge shoes to fill – but I hope to continue that.

What's your history been here? Lots of childhood memories?

Like so many. I definitely got my love for funk music early on from the guys back in the kitchen. When I was in elementary school I used to get dropped off by the school bus here every afternoon, so I spent a lot of my life in this building, probably more than anywhere.

I started working here as a teenager during the summers. [The Huntersville location] opened my senior year in high school. I was just waiting tables up there and taking classes at CPCC. We were having some management issues and it somehow just landed on me.

Have you made any changes to the menu?

I grew up eating this food, so I love it. Some of the newer things on the menu are things that I've incorporated; the chicken casserole that we do on Tuesdays, the baked chicken that we do on Wednesdays and we have a roasted pork special that we do on Fridays.

These are all collaborations, trying to do something different. Our store in Huntersville, I've been thinking of it now looking back as a test run for me. She gave me a lot of freedom having that store up there. The chicken casserole and baked chicken are things that we started at our Huntersville location and have now brought down here.