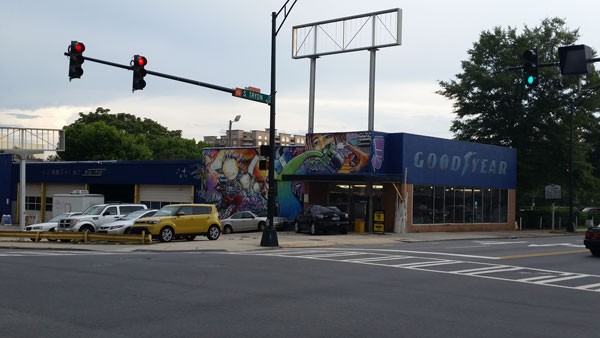 Two sweaty joggers slow their running pace outside of the defunct Goodyear Service Center at the corner of Tryon and Stonewall Streets. But they don't seem out of breath and they aren't reaching for water bottles. Like many others who have passed the building within the last month, they've come to an abrupt stop out of curiosity.

They peek through the windows, fixated on the building which is temporarily functioning as an arts studio space. Forget about tires; their eyes are glued to a mural painted by Graham Carew on one of the interior walls. They eventually regain their focus and pick up their feet to continue their workout routine, which takes them down Stonewall Street, past the side of the complex — directly across from Harvey B. Gantt Center for African American Art + Culture — where local artist John Hairston, Jr. painted a mural.

Two badass murals in one place — now, that is worth stopping for. But there's more — so much more — deeper inside and you can have a look for yourself during the July Artist Showcase on July 31, which features works created by artists who have utilized the space over the month.

Kathryn Goodwin, Holly Christine Keogh and Todd Stewart are three of the artists who are part of July's artists-in-residency program which continues through September with multidisciplinary artists using the space and being stipend for their work. Each set of monthly residencies culminates with an open-to-the-public showcase.

Other artists and performers, including members of the experimental theatre/dance ensembles XOXO and Triptych Collective, and artists Matthew Steele and Robert Childers will inhabit the space over the next three months.

The unconventional studio space, which operated as a Goodyear Service Center until December 2014, is the byproduct of a real estate development company called Crescent Communities. In March, the firm also filed a rezoning petition for property in Noda which was approved by council shortly thereafter. That location will take over the land that currently houses the Chop Shop and Ultimage Gym for a mixed-use development that is anticipated to include apartments and a potential hotel and/or grocery store.

In an effort to facilitate relationships with the arts community and Charlotte's ever-budding cultural scene, Crescent has launched its Skyline Series — an initiative they've already established in Nashville, Tennessee, where they hold properties.

"The idea with the second [Skyline series] was about having a series of events where we celebrate and promote the different facets of what's happening in Charlotte kind of by discipline," says Tyler Niess, chief marketing officer at Crescent Communities. "The first one was visual arts and then we just had one last week that was centered on food. We're talking about others in the future for film, perform arts, music, etc."

The Skyline series launched in Charlotte with a commissioned mural by John Hairston Jr. — which took around 18-20 hours to complete and required him to conquer his fear of heights — back in April. It was followed by a swanky shindig featuring Amy Herman, creator of Vintage Charlotte and an avid arts supporter, as a guest speaker. She spoke about the critical need for arts spaces, resources and community support. 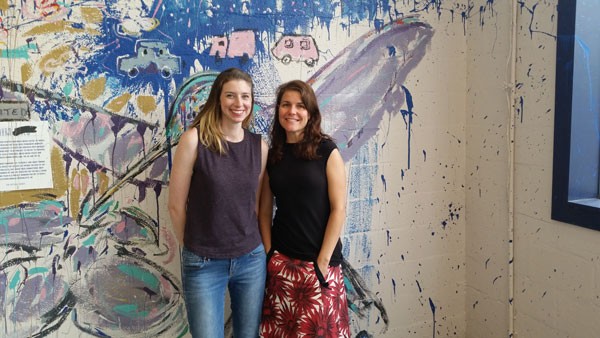 After the function, she was contacted by Crescent and asked to co-direct the next Skyline series project — an artist-in-residency program within the spacious building — along with Amy Bagwell and Graham Carew (who has worked on empty-space artist projects in Europe) of The Wall Poems of Charlotte. The trio of artists jumped at the opportunity to utilize the former Goodyear space, slated for demolition later this year. After it is torn down, Crescent will begin construction on the property and the adjacent lot behind it, which will be the future home of Tryon Place, a new development with a 27-story office tower and boutique hotel, in addition to a parking structure and spaces for shops and restaurants.

Bagwell sees this specific project — and its temporary artists refuge — as a transformation rather than a demise.

"I'm a poet first, so for me there's this incredible romance in the idea of something flaming and then dying and something being reborn. I think of it in such metaphorical terms. We're giving this place a send-off," Bagwell says.

She reflects on the significance of the former tire business and the memories the property itself holds. Eric Mullis of Triptych Collective has memories of bringing his car in for service there and in August he and his crew will be dancing on its worn, but solid and sturdy floors.

"It's a beautiful, haunting space and we can do something in here," Bagwell says. "Even if everything affixed to the walls goes away, it will be a way to honor what was here before and kind of show off what these folks can do."

Temporary access to empty and unconventional spaces, whether for exhibits or studios, is on the rise. Last month, artist Brad Thomas hosted a pop-up exhibit at a "for lease" space in Latta Arcade. Thomas worked with Charlotte Center City Partners, who helped make the connection to CNL Commercial Real Estate — the group that manages the property.

Charlotte Center City Partners also helped to initiate other property management conversations with artists, which resulted in a small, unoccupied retail space becoming Artspace 525. The collaborative studio, unveiled in March of 2014, serves as headquarters for The Wall Poems of Charlotte.

For Herman, the need for places to create art is a prime focus. "While I do value places to show art, I think my main focus would be places to create art because that's what we're really lacking in Charlotte," Herman says. "There's really not a lot of studio spaces and a lot of the places that kind of sell themselves as studio spaces maybe don't have all the utilities that an artist would want or might be a little too clean or too small or, the biggest problem, is too expensive."

"I hope we see more of this. There is certainly a wealth of property and what you find when you do stuff like this is that you can invigorate a section of a street and you can even ward off vandalism and other sorts of crime, because you have someone occupying the space. So, for a landlord there's some benefits," Bagwell says. "For artists, at least from my perspective, the environment has a big influence on what you're doing. My grandfather had a Goodyear Service Center, so when I walked in I fell in love. In reacting to what's there, it creates its own character. I think if we can prove that it works — no one got hurt, no one painted penises on the outside of the building — then maybe more property owners, developers and managers will say 'You know, I would like to do more of this.'" 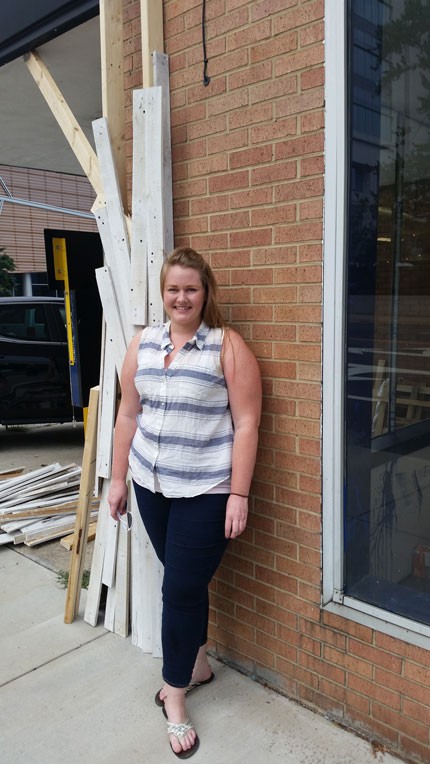 Growing outside of the Goodyear complex, you'll find what resembles a tree; the trunk and limbs made out of white-colored boards and leaves out of plastic grocery and trash bags. The structure, created by Goodwin, winds its way up the side of the building, creating a life-like form over the exterior. "I'm kind of playing off the idea that this building is getting a new life and being repurposed for the next couple of months, so I've repurposed materials to convey that also," she says.

In the Goodyear space, Stewart is breaking away from his usual labor-intensive process by taking advantage of the location and its materials. You'll find him breaking things apart, rummaging through dirt and drilling for his works, which include concentric rings, swirls and manipulations of found objects. "The first thing I started doing was pulling off some loose pieces of the wall and I discovered this amazing grid structure, the mesh behind it and how it interacted with this really beautiful space behind that. I knew instantly that I was just going to play with salvaged materials," Stewart says. In his explorations of the buildings floor, he's found cigarette butts, rubber bands, dust, oil, grit and grime. "This place is pretty much like a geological history of every bit of labor that's gone into this place." 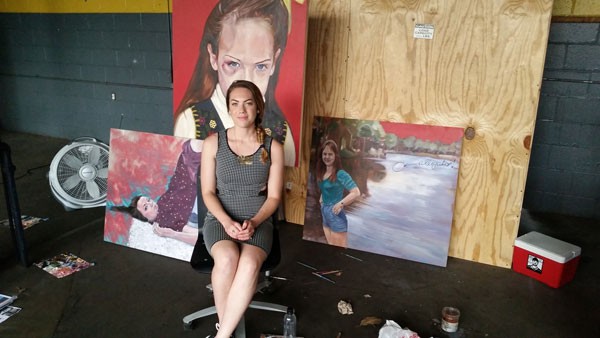 Keogh uses discarded family photographs and video stills as the source of inspiration behind her detailed portraits. "A lot of the photos were printed and forgotten. They didn't make the cuts to be framed and they are not necessarily shining moments from childhood," says Keogh, who also likes the idea that many of them are of times that aren't easily recollected or remembered from family stories. In her time at the Goodyear space, she has had the chance to interact with people passing by — her studio sits in the back of the complex and opens up to the outside through several large garage doors. "I think my work is looking different from when I started working here. I'm leaving them a little more unfinished and leaving the backgrounds exposed," Keogh says. "I think a lot of that is from feeding off of an empty, gutted building. It has had an impact on my work. It has a history of its own that I'm thinking about as I paint as well."