And outside-of-the-box adventures to keep an eye on 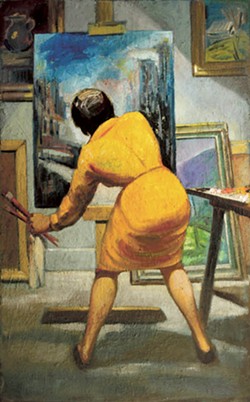 2015 was full of surprises. There were artsy shenanigans in various forms that took us out of our comfort zones and into an exciting new terrain.

Back in April, UNC-Charlotte's College of Art & Architecture and designers at Boxman Studios introduced us to MAX (Mobile Arts & Community Experience), a mobile performance space. This compact custom-built structure allows for pop-up shows to occur anywhere and anytime.

We were also introduced to true avant-garde theater via a trip to and from the afterlife with XOXO's Bohemian Grove. The excursion to a farm in Clover, S.C., was a memorable journey.

Venturing to more casual offerings, we were entertained by Charlotte Storytellers, started by two Brown University grads, Ramya Mahalingam and Nora Orton. Since the first show in April, the group — which hosts weekly meetings where stories are honed — has grown quite the following. Live shows fill up quickly in whatever space they dominate.

Local artists Amy Herman and Amy Bagwell (Side note: Not to forget Bagwell's efforts with new Wall Poems like "The Bus Stop" at the corner of 7th and Brevard Streets) also made significant contributions to 2015 with their Skyline Art Series'. Making use of the former Goodyear Service Center in Uptown, they hosted monthly exhibits and events. Though it will be sad to see the building demolished in 2016, there are still events being planned for the new year — including an evening with Tyler Baum, who is showcasing videos, animation, art, music, and cartoons on Jan. 14, 2016. The last event is slated for Jan. 29, 2016.

In 2015, we also met Cece Stronach, the founder of #RuminateCLT (a culinary and visual art collaboration with a goal to expose the interconnectedness between food, art, culture and community in Charlotte). Stronach painted pretty dishes from local restaurants — The Asbury, 300 East and more — that made our mouth water. In September, the works were featured in an exhibit at Free Range Brewing with others from Craig Morrow who created colored-pencil drawings of food from Q.C. spots like Futobuta.

Meanwhile on the big museum front, there were other exhibits that left an impression. Among those were local artist Marcus Kiser and Jason Woodberry's Intergalactic Soul exhibit at Harvey B. Gantt Center for African-American Arts + Culture. The exhibit was comprised of a Sci-Fi storyline with characters who confronted racism and intolerant, white supremacist like space creatures. Watch for more from Kiser in 2016, as he's a 2015 Regional Artist Project Grant Recipient — picking up $1,500 to purchase a new iMac computer ... and we can't wait to see what he does with it.

Southern art takes the spotlight at Mint Museum Uptown with a collection of works by Eugene Thomason, a longtime artist and Charlotte native who depicts people, places and things related to life in Appalachia where he later lived. The exhibit, New York to Nebo: The Artistic Journey of Eugene Thomason, runs through March 27.

McColl Center for Art + Innovation kicked off its New Frequencies — a program of off-the-beaten-path music and films — with Swiss jazz trio Der Wawawa and finished the year with short flicks by Jem Cohen.

While there are so many more things that happened in 2015, we don't have enough space to reflect nor do we want to rub in all the cool things you may have missed out on.

However, go ahead and mark CPCC's Sensoria (April 8-16), a celebration of literature and arts, and Boom (April 8-10), a fest of the arts and performances, on the 2016 calendar.

Also, Arts & Science Council announced the local artists who will be participating in 2016's ArtPop, a program that allows their works to be featured on local billboards throughout the year. Charlotte recipients include Osiris Rain, Kyle Mosher, Julio Gonzalez, Sydney Sogol and more. Installations begin on Jan. 4, 2016, so be on the lookout for the cool signage.