Loss and hope at core of Conjoined Opposites exhibit

A study in contrasts 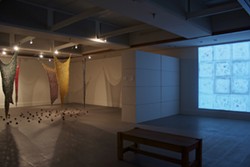 Indrani Nayar-Gall took a circuitous route from her native India to her current home in Charlotte. Cultural dislocation has long been at the heart of her work, but lately she has focused on its most extreme manifestation: forced migration.

For Conjoined Opposites, now at Winthrop University's Elizabeth Dunlap Patrick Gallery, Nayar-Gall combined elements of older and newer work to create installations that not only acknowledge her longtime interest in the immigrant experience but also reveal a fresh urgency as they address both the toll of genocide and the human capacity to heal.

Although "Points, Words, Threads I" is hard to fully comprehend without the wall text, it succeeds on its formal qualities alone. There's a strong sense of longing and pain emanating from it, even if its meaning is not immediately apparent.

This installation is filled with objects and materials that for the artist are richly symbolic, representing among other things connection, abandonment, revitalization, and hostile terrain. It is dominated by five large knitted pieces, suspended from the ceiling, that seem to reference human forms. Made primarily of thick hand-dyed yarns, they are interwoven with fishing line. Hot glue covers the line, collecting along it to resemble dew or tears. Scattered across the floor are dozens of small polystyrene foam balls that have been cut, painted and embellished to resemble thorny fruits or seedpods. The audio is the hollow, haunting sound of water dripping from a faucet.

"Points, Words, Threads II" has several distinct components: a set of prints, an animated sequence and sound. This installation is explicit in its intentions; that's due in large part to the soundtrack, which consists primarily of excerpts from Jen Marlowe's Darfur Diaries: Stories of Survival.

The 20 intaglio-type prints are arranged in an 8' x 10' grid. The imagery on the prints seems open to interpretation. While they are clearly aerial views of landscapes, they're filled with marks and sinuous lines that could be seen as any number of things; cells, gun sights, arteries, wombs, flowers, serpents, topographic marks. Although executed with a light, sure hand, the prints have an anxious quality.

The prints function as a screen on which an animation is projected. This is a beautiful, heartbreaking succession of hand-drawn, child-like images that shift from the peaceful to the threatening and back again — birds become planes; planes drop tear-shaped bombs; bombs become clouds — in an endless cycle of hope and devastation. Although this installation is seamless and its components are not intended to be teased apart, this animation is the most dramatic and moving element of the entire exhibition. Nayar-Gall was inspired to create it after coming across drawings made by children in Darfur; instead of the archetypal birds, little houses and fluffy clouds, these children draw images of death, because this is what they know.

The audio features layered voices, some dispassionate, some emotional, reciting statistics on the Darfur genocide and recounting stories of both horror and hope. It is a constant murmur, with an occasional word or phrase that seems to leap out. The pathos of one line in particular — "Nobody tells the orphan how to cry" — rings out beyond all others.

Conjoined Opposites is a project that has developed over time and encompassed numerous collaborators, creating a web of relationships. While it seeks to inform, it is not preachy. This is a somber exhibition, but it is also life affirming.

The exhibition Conjoined Opposites will be on display through March 30 at the Winthrop University Galleries, Rock Hill, S.C. http://winthrop.edu/vpa/galleries. 803-323-2493.