Magic in the Moonlight, The Skeleton Twins, Tales from the Crypt among new home entertainment titles | View from the Couch | Creative Loafing Charlotte
Switch to the mobile version of this page.

Magic in the Moonlight, The Skeleton Twins, Tales from the Crypt among new home entertainment titles 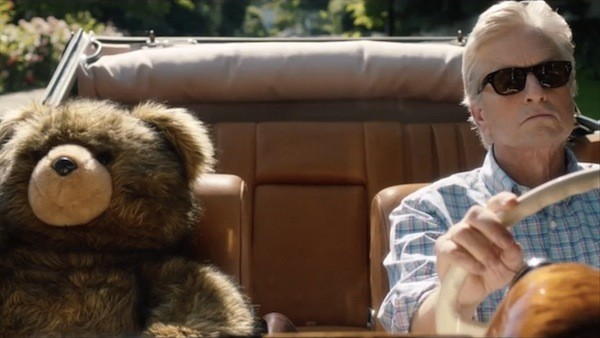 AND SO IT GOES (2014). Are there any replacement shows needed on the ABC prime-time schedule? Because here's a doozy of a concept, just perfect for the boob tube: A cranky senior citizen makes life miserable for those around him until he's unexpectedly burdened with a granddaughter he never knew he had. To help him raise the 10-year-old child, he enlists the aid of his next-door neighbor, a weepy lounge singer. Hilarity ensues. Or not. That's the fossilized plot of And So It Goes, an anemic comedy that somehow avoided becoming a torturous TV series starring Gerald McRaney and Delta Burke and instead showed up in theaters last summer starring Oscar winners Michael Douglas and Diane Keaton. But make no mistake: This is sitcom material all the way, more so given the laughtrack-ready beats provided by director Rob Reiner (who hasn't helmed a decent picture since 1995's The American President) and writer Mark Andrus (basically swiping the playbook of his overrated As Good As It Gets screenplay). Keaton is saddled with a flimsy role that's beneath her, although that seems to be her lot in life these years; for his part, Douglas is allowed to display a bit more range but does have to share scenes with a defecating dog. It's depressing to consider whether, for these two talented stars, this is now as good as it gets. 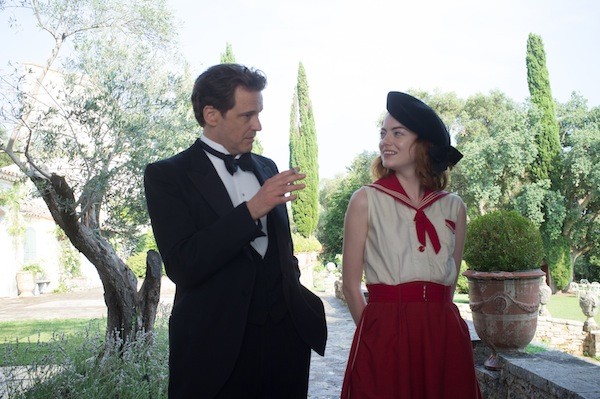 MAGIC IN THE MOONLIGHT (2014). An inconsequential trifle even by late-career standards, this finds Woody Allen attempting to once again create movie magic — only instead of akin to pulling a rabbit out of a hat, it feels like the workaholic auteur merely plucked an old, discarded script out of a cobweb-covered drawer. Set in the 1920s, the picture stars Colin Firth as Stanley Crawford, a British magician who poses as a Chinaman and performs under the moniker Wei Ling Soo. Stanley is also known as a specialist in debunking fake psychics, and so his friend Howard (Simon McBurney) calls him to the French Riviera to expose a spiritualist that he feels has been taking advantage of a wealthy family living there. That would be Sophie Baker (Emma Stone), who, with her mom (Marcia Gay Harden) in tow, has come to help the Catledge family matriarch (Jackie Weaver) contact her dearly departed husband. As expected, the storyline finds Stanley attempting to reveal that Sophie is a fake, only to fall for her even as he has trouble disproving any of her supernatural abilities. Magic in the Moonlight is a toothless endeavor, with a central romance that never for an instance feels believable and some late-inning betrayals that ultimately amount to nothing. Firth is fine (if one-note) as a narcissist who finds little to admire in the world, but Stone, while game, is too young for a role that, admittedly, would cripple almost any actress diving into its shallow waters. Allen has created movie magic on many occasions, but in this instance, the man behind the curtain has gone noticeably MIA.

Blu-ray extras consist of a behind-the-scenes featurette and a look at the film's Los Angeles premiere. 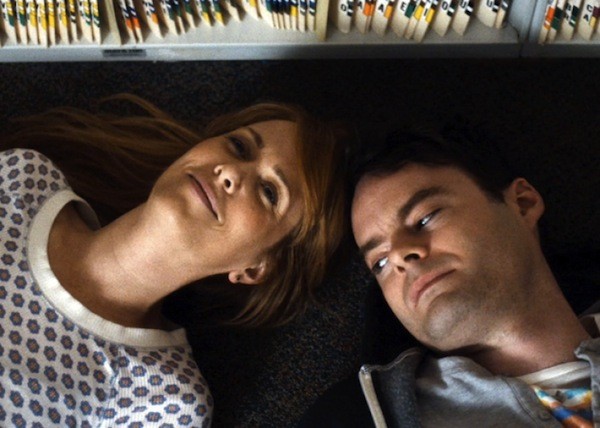 THE SKELETON TWINS (2014). Although they were close while growing up, twins Milo (Bill Hader) and Maggie (Kristen Wiig) haven't seen each other in a decade, a situation that changes when Milo's failed suicide attempt brings his sister to his bedside. For her part, Maggie was contemplating suicide right when she got the hospital call, so clearly here are two people pretty miserable in their lives. Initially, Milo seems the more unfortunate of the pair: A homosexual whose attempts at making it as an actor in L.A. have failed, he's also just broken up with his boyfriend. He's invited back east by Maggie to stay with her for a spell — she professes to be more stable, in that at least she has a significant other in the form of her husband, a perpetually chipper guy named Lance (Luke Wilson in one of his best performances). But the longer Milo stays, the clearer it becomes that his sibling matches him step for step when it comes to being a mental and emotional mess. Wiig and Hader are primarily known as comedians, and certainly, the script by director Craig Johnson and co-writer Mark Heyman contains plenty of humor. But it's almost all of the tar-black variety, particularly in the biting asides Milo is spouting every few minutes. Johnson and Heyman aren't afraid to make their two leading characters frequently infuriating and often unlikable, and yet because they're so recognizably flawed, it only endears them to viewers even more. Acceptance of these sad sacks is further accentuated by the presence of Hader and Wiig, who tease out the weighty melancholy that dogs their characters' every move. Even when the picture slightly loses our trust with an unlikely climax, our faith in its two stars is never shaken. 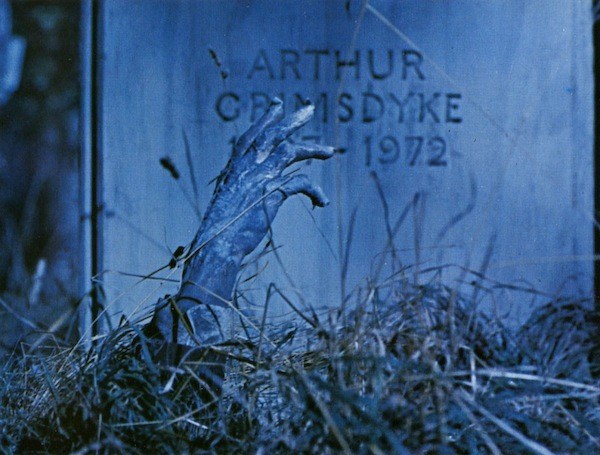 TALES FROM THE CRYPT (1972) / VAULT OF HORROR (1973). I'm a sucker for horror anthology flicks, so it was enjoyable revisiting (for the umpteenth time) this British twofer based on the horror comics by William M. Gaines (of Mad magazine fame), Al Feldstein (ditto) and Johnny Craig. Tales from the Crypt is the better of the pair, as five people who get separated from their tour group deep inside some catacombs find themselves listening to macabre stories spun by the self-named Crypt Keeper (Ralph Richardson). The best vignette finds Peter Cushing delivering one of the best performances of his long career, as a kindly old trash collector who loves his late wife, his dogs and the local children. But a blue-blood neighbor (Robin Phillips) feels superior to his lower-class neighbor, so he sets out to destroy his life. Cushing is heartbreaking as the gentle senior, but rest assured he gets his revenge in bloody fashion. The other stories star Joan Collins as a murderous wife who runs afoul of a serial killer dressed like Santa Claus; Ian Hendry as an adulterous husband involved in a bizarre car accident; Richard Greene as a ruthless businessman whose wife (Barbara Murray) asks three wishes of a mystical Chinese statue; and Nigel Patrick as the heartless overseer of a home for the blind. 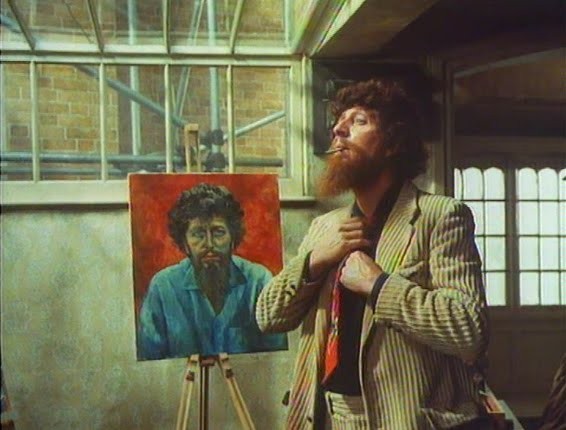 Tales from the Crypt proved to be a box office hit (IMDb states it was the year's second biggest moneymaker under The Godfather, but there's no verification for that claim, and it's impossible to believe it grossed more than certified runners-up The Poseidon Adventure, What's Up, Doc? and Deliverance), so it's no surprise it was followed the next year by Vault of Horror. This second picture didn't fare nearly as well with moviegoers or critics, although its tales are of comparable quality. There's no Crypt Keeper in this anthology, only five men who relate their odd dreams as they all remain trapped in an office basement. Daniel Massey's a murderer whose search for his sister (real-life sibling Anna Massey) leads him to a town which only comes "alive" at night; Terry-Thomas plays a fussbudget whose neatness wears down his wife (Glynis Johns); Curd Jurgens is a magician who will resort to any means necessary to locate a new trick for his act; Michael Craig portrays a scheming man with a clever plan to scam his insurance company; and Tom Baker (TV's Doctor Who for seven years beginning in 1974) plays an artist who employs voodoo to help him exact revenge on those who cheated him.

Tags: View from the Couch, film, review, View From The Couch, Blu-ray, DVD, Matt Brunson, And So It Goes, Magic in the Moonlight, The Skeleton Twins, Tales from the Crypt, Vault of Horror