Magic on a Skewer 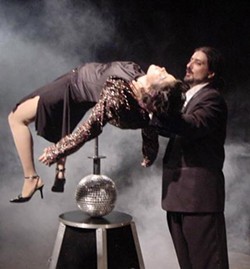 When I saw the premiere of Orange Lemon Egg Canary at the 2003 Humana New Play Festival, the theatrics were ideal. In an arena staging, the apparition of a dead magician's assistant materialized both above and below us in all corners of the house. Red curtains dropped down at intermission to hide our view of all four sides of the stage -- very apt for a drama subtitled "A Trick in Four Acts."

If the current Carolina Actor's Studio Theatre production doesn't quite match the hocus-pocus atmospherics that I witnessed in Louisville, there's no less dazzle in the magic. George Brown, directing for the first time in seven years, takes a fresh look at the magician hero -- making him older and less malevolent than he was in Kentucky -- and burrows a little more deeply into the text.

C.A.S.T.'s managing director, Michael Simmons, also saw the Humana version. While handling lights and the prodigious technical side of this fresh Orange, Simmons allowed himself to be squeezed into the starring role of Great the Magician.

Since Great is burnt-out on magic -- and haunted by a mishap that left a former assistant hideously scarred -- the older casting works out well. Brown and Simmons also conspire to make it possible for the apparition to crop up in a place or two where no C.A.S.T. performer has appeared before.

Everything in Rinne Groff's script revolves around the dangerous Hypnotic Balance, an impalement illusion that had me cringing once again. The apparition, Henrietta, died long ago at the hands of Great's grandfather when the trick went awry. A similar impalement scarred Great's own assistant, Egypt. Now she wants her revenge -- and the secret behind the illusion.

Fittingly, it is Great's wannabe assistant, Trilby, who winds up levitating atop the ever-present skewer despite its bloody history. Will there be another horrid accident before our eyes? Trilby is playing a very dangerous game, to be sure. Beloved by both the crazed Egypt and the embittered Great, she is working on Egypt's behalf to pry loose the secret of an illusion that has been in Great's family for generations.

The permutations of the plot ultimately blur by us, which is why Brown's emphasis on the message pays such rich dividends. Our fascination with magic hinges on our willingness to be fooled. So does our repeated surrender to the tyrannical power of love. That's what we see happening to the characters onstage -- while we surrender to the illusions of magic and theater.

Delivered by mere actors, the magic is beyond expectation, nudged along by Simmons' well-placed lights and smoke machines. Brown works parallel wonders with the three lovely assistants. At first, newcomer Heather Leanna seems to need an injection of charisma, but that lack of sparkle ultimately works in her favor in an All About Eve sort of way. As Henrietta, Leela Vox is all Vegas sparkle in her Charlotte debut. And after numerous roles on local stages that left the question in doubt, Adyana de la Torre's performance as Egypt affirms that she can be absolutely devastating.

Opera Carolina opened its season with Georges Bizet's other opera, The Pearl Fishers. With soprano Jennifer Welch-Babidge as the wanton priestess Léïla and tenor Fernando de la Mora as her fisherman adulator Nadir, there was smoldering chemistry by the Sri Lankan shore. Listening to their solo arias and watching their fervent duets, you had to wonder why this work took so long to reach the Belk Theater stage.

Confronted with the gaucheries of Stephanie Sundine's stage direction and baritone Troy Cook's wooden portrayal of Zurga, ruler of the fishermen and Nadir's jealous soul brother, you often could see why OC had cast away The Pearl in favor of Carmen. Yet even when Cook was hamstringing the exposition, the choreography of Till Schmidt-Rimpler and his Moving Poets dancers infused the stolid pageantry with welcome spice.

Then with her crystalline top notes and her liquid coloratura, Welch-Babidge injected the priestess with new allure. De la Mora burned nervously from his first arrival, consistently cavalier in his ardor. Nor was Cook unpleasant to hear in the famed "Au fond du temple" duet recounting how Zurga and Nadir formed their precarious bond.

After Zurga had condemned his beloved and his sworn brother to the stake in a fit of jealousy, Cook really came to life in the Act 3 duet with the supplicating Welch-Babidge. Throughout the evening, James Meena and the Charlotte Symphony delivered all the riches of Bizet's score. And if the guys in the Opera Carolina Chorus made a disheveled entrance, all was well from the moment the womenfolk came to the rescue.

The balcony was open at Booth Playhouse last Saturday night, and onstage Queen City Jazz Company's program of jazz dance tidbits was as vigorous as their ticket sales. A Composition in Jazz presented nine pieces, overall QCJC's most artful smorgasbord yet, shedding their previous predilection toward aerobics.

As it was last October, "Queen Gemini" was the pick of the litter. Created especially for the Charlotte troupe by Corinne McFadden, associate choreographer for Wicked on Broadway, the work depicts a contemporary woman and her conflicting urges of sexuality, motherhood, and ambition. With Britni Stitt taking over the role of the protagonist, the tonality was darker and more anguished. Better yet, Sara Atkins as Sexuality, Joanne Jemsek as Motherhood, and Aimee Moynihan as Ambition were sharper reprising their roles.

LJ Jellison's new "Fade to Black" was a lively enough way to introduce new audience to the full QCJC ensemble. Coming from a dancer with connections to Wicked, the piece was somewhat disappointing. OK, so everyone is dressed in camo. What now? All the energy was not wed to a discernible concept or purpose, and synchronicity was not up to the usual company standard -- perhaps betraying a lack of lead-time for rehearsals.

The Reduced Shakespeare Company made their Charlotte debut at McGlohon with All the Great Books (abridged). Armed with choice barbs aimed at Charlotte and the Rolling Stones -- plus palsied impressions of the aging rockers -- the trio of Dominic Conti and co-authors Reed Martin and Austin Tichenor scored a resounding, hilarious triumph.

If you missed the merriment, Actor's Theatre will be mounting a production of this literate silliness next spring. They have a tough act to follow.