Making a splash | Features | Creative Loafing Charlotte
Switch to the mobile version of this page.

Dive into these cinematic swimming pools

The ocean. Both majestic and mysterious, it's no wonder that countless films have been set on it, in it, or alongside it. From fact-based dramas (Titanic) to creature features (The Beast from 20,000 Fathoms) to those beach blanket bingo flicks, the ocean has often proven to be as integral a movie character as all the flesh-and-blood protagonists who ride its waves or make out under its gently rolling whitecaps. 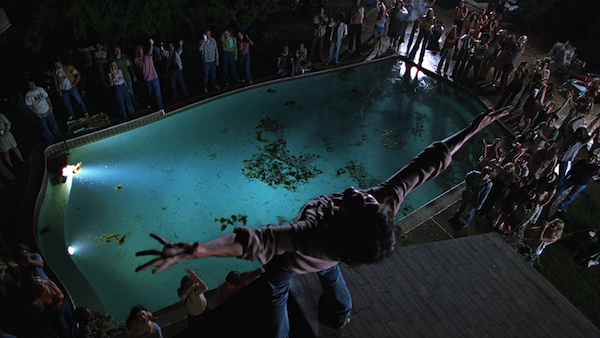 But the swimming pool? It's neither majestic nor mysterious: One medium-range shot from a camera lens and the viewer can absorb its entire length and everything in it. In the ocean, sharks and submarines and sea monsters can frighteningly be anywhere at any time, but the most terrifying thing in a swimming pool is usually the dead bee that's been bobbing on the surface for the last couple of days.

Still, that's not to say that cinema has never given this popular recreational entity its due. With the summer season presently enveloping us, here's a look at several memorable movie moments involving swimming pools.

At the top of the list are two movies that depend on the pool for their very existence. The first is, naturally enough, 2003's intriguing art-house hit Swimming Pool. Charlotte Rampling stars as a British author who retreats to an isolated house in the south of France in order to get some writing done. When her solace is interrupted by a bratty French teen (Ludivine Sagnier), she engages in a battle of wills with the young upstart, only to find they're both affected by a murder that takes place poolside. The film is a celluloid mind game, a melding of fact and fantasy that forces viewers to draw their own conclusions.

As for the swimming pool of the title, it carries its own measure of symbolic weight; as writer-director François Ozon stated in an interview, "Each person can see in it whatever symbol he or she desires... In this film, I'm utilizing the swimming pool for its plasticine quality and also for its enclosed and confining aspect. Contrary to the ocean, a pool is something that you can manipulate... [It's] like a cinema screen on which you project things."

The other major pool pic is 1968's The Swimmer. An adaptation of a John Cheever short story, this casts Burt Lancaster as Ned Merrill, who as the picture begins is seen stopping by the house of some acquaintances and requesting a lap in their pool. He quickly realizes that this Connecticut suburb is strewn with pools that lead all the way to his house, so he makes the decision to "swim" all the way home. By all initial evidence, the cocky and cheerful Ned is a successful businessman, a loving husband and father, and perhaps even a pillar of his community. But with each successive dip in a pool — and with each encounter with the various neighbors, many of whom are decidedly not friendly — the truth about Ned Merrill emerges, and the movie ends on a scene of devastating power.

Working from a script by his wife Eleanor Perry, director Frank Perry crafted a penetrating piece of introspection that was clearly ahead of its time. Taking a harsh look at the cruelty and conformity of the upper middle class while also remaining tantalizingly vague about some of the details surrounding the crash-and-burn of Ned's American Dream, this haunting and moody drama continues to stick with me.

Unless you count disposable yarns like Swimfan and Swim Team (and let's not), the swimming pool hasn't exactly been the marquee attraction on many other films. Yet the number of movies that have managed to incorporate it in a scene or two are legion and, in a couple of instances, downright classic. When he's not busy taking up with Mrs. Robinson or her daughter, Benjamin Braddock (Dustin Hoffman) spends a good deal of time lounging by the family pool in 1967's The Graduate. And in one of the movie's best scenes (imaginatively shot from Benjamin's point of view), the lad, decked out in scuba gear, retreats to the bottom of the pool to get away from all the maddening members of the older generation. Equally memorable is the opening of 1950's Sunset Boulevard, where we spot a dead body floating in a swimming pool. It's not long before we discover that the corpse is that of protagonist Joe Gillis (William Holden), and that he'll be narrating the proceedings from beyond the grave!

Of course, for more modern audiences, the classic pool sequence will forever remain the riotous moment from 1980's Caddyshack, in which an innocent candy bar, floating to the strains of John Williams' Jaws score, is mistaken by swimmers as something else ("Doody!"), leading to a mass exodus and the eventual draining of the pool. Groundskeeper Carl Spackler's (Bill Murray) reaction to the offending flotsam is the capper to this memorably tasteless interlude. And dubious taste in a darker vein can be found in the 1971 cult classic Harold and Maude, in which young Harold (Bud Cort) repeatedly stages fake suicides in front of his mother; one such episode involves him floating facedown, Joe Gillis-style, in the family pool. 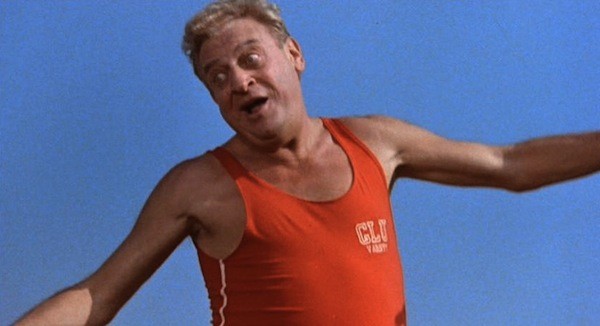 More tasteful, though no less funny, is the climactic set piece in 1986's Back to School, in which Rodney Dangerfield's good-natured Thornton Melon agrees to help out his son's college swim team by suiting up and performing the death-defying Triple Lindy. And speaking of death-defying, who can forget the uproarious moment in 2000's Almost Famous during which rock star Russell Hammond (Billy Crudup) prepares to take a swan dive off the roof into the pool below, exclaiming, "I am a golden god!"

But for the ultimate in humor — at least in an unintentional manner — don't miss the all-time turkey Eegah! A silly grade-Z effort about a caveman (recent Mad Monster Party guest Richard Kiel) who's been hanging around Palm Springs for millions of years, this 1962 monstrosity includes a legendarily awful sequence in which our dorky hero (Arch Hall Jr., the director's son) serenades his girlfriend (Marilyn Manning) while she splashes around in a swimming pool. Never mind that her name is Roxy and the song he sings (or rather, mangles) is called "Vickie" — with lyrics like, "Vickie, Vickie, I'm so alone, Would you just talk to me or call me on the phone?," it's all the poor girl can do to refrain from drowning this clod.

Nearly as risible as Eegah! is the moment in the ill-fated 2010 remake of A Nightmare on Elm Street in which a dunce somehow falls asleep while swimming laps in the school pool, thus allowing Freddy Krueger (Jackie Earle Haley) to mess him up good. 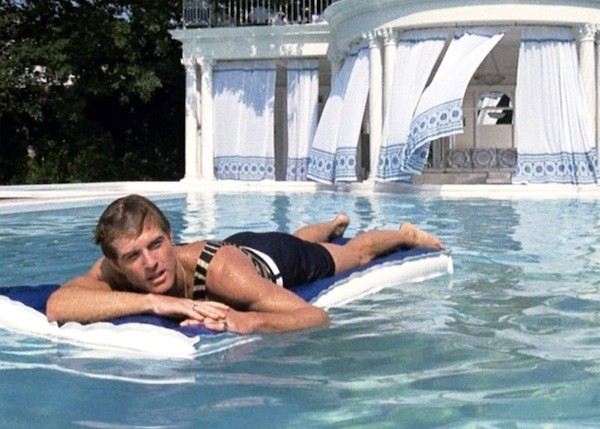 Where there's laughter, there's also tears, and several movies have staged scenes of death, despair and degradation around swimming holes. Millionaire Jay Gatsby (Robert Redford) is blown away by working stiff George Wilson (Scott Wilson) while enjoying laps in his luxuriant pool in 1974's The Great Gatsby, and futureworld detective John Anderton (Tom Cruise) is devastated after his son is snatched (and later murdered) as they're enjoying quality time together at a public pool in 2002's Minority Report. And racism is in full bloom in 1999's Crazy In Alabama and 2002's Far From Heaven, as both period pieces include scenes in which blacks aren't allowed to enjoy the cool waters of the pools inhabited by white patrons.

The ugliness of the encounters at these pools are in contrast to the beauty and artistry on view in other flicks. For sheer opulence, you can't beat the lavish sets created for the series of hits that swimming star Esther Williams made for MGM (including 1944's Bathing Beauty and 1946's Ziegfeld Follies) or the choreographed watershows concocted by Busby Berkeley (as in 1933's Footlight Parade). Williams and Berkeley even worked together on a couple of pictures (including 1952's Million Dollar Mermaid), and, ever the prankster, Mel Brooks spoofed their output in 1981's History of the World Part I, where the "Spanish Inquisition" segment finds nuns shucking their habits to take part in a balletic synchronized swimming routine. Meanwhile, artistry of another sort can be found in Robert Altman's 1977 mood piece 3 Women, as the character played by Janice Rule has painted the bottom of a swimming pool with dazzling (if disturbing) creatures.

If action, not imagery, is your thing, then you can count on Bond to make a splash in this area. The 1971 entry Diamonds Are Forever finds Agent 007 (Sean Connery) tangling with two brawny beauties — named Bambi and Thumper, no less — in an oasis of H2O. And in Sam Peckinpah's 1983 thriller The Osterman Weekend, journalist John Tanner (Rutger Hauer) hides at the bottom of his pool, holding his breath as flames lick the surface and waiting for the right moment when he can propel himself out of the water and shoot the villain with the crossbow he's wielding. Is this even possible? Hell if I know, but it made for an impressive shot in the "coming attractions" trailer.

All good stuff. Still, there are two scenes that particularly deserve special mention, both from horror movies. The climax of the 2008 Swedish import Let the Right One In is astonishingly inventive: Scored to a radio playing Secret Service's song "Flash in the Night," the sequence finds bullied Oskar (Kåre Hedebrant) remaining beneath the pool's surface as his best friend Eli (Lina Leandersson), who's a vampire, dispatches of the mean boys bothering her buddy.

As for the single best use of a swimming pool in a movie, the clear pick is a classic scene from 1942's superb Cat People. Heroine Jane Randolph, taking a late-night swim at an indoor pool, is forced to tread water for what seems like an eternity while an unseen panther lurks (and growls) in the darkness surrounding her. Director Jacques Tourneur uses shadows and light to dazzling effect in this beautifully staged sequence that works because the menace is kept hidden from the viewers. In this modern era in which the costly price of special effects ensures everything must be thrust in our faces, this film's visual subtlety is a welcome diversion, about as refreshing as — yes — a dip in a cool pool on a hot summer day.