A nearby taste of Italy 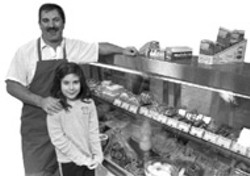 Even though the year is new, life seems to default to a drab winter routine after the glittery holidays. One way to jolt your taste buds into 2003 is to resolve to visit one of Charlotte's unique food stores each month. Besides, this is the easiest way to sample colorful cuisines from distant places without having to take off your boots at the airport.Although our area isn't blessed with longstanding, touristy ethnic neighborhoods like New York's Little Italy or Boston's North End, we do have a few ethnic markets scattered throughout the region. Some of these are Italian and while I've yet to see bocce courts spring up in McAlpine Park or Vespas parked in front of Renfrow's Hardware, one of these Italian markets is located in downtown Matthews.

Domenico's Italian Market is a small shop tucked behind Raucci's on East John Street, only a block's walk from the seasonal Matthews Farmers' Market. Owner Domenico Puleio will more than likely be on hand to greet you.

"I have relationships with my customers," Puleio said. "I miss the people who shopped in the markets on a daily basis in my hometown." Puleio is from Calabrese, a small town in the boot of Italy, where pasta plays such a significant part of life that legend says young females had to master the preparation of 13 varieties of pasta before they could marry.

Puleio moved to Charlotte in 1990 after working in his brothers' restaurant in Naples, Florida, for several years. He opened Domenico's Italian Restaurant in Windsor Square in Matthews in 1991, but decided not to renew his lease in 1996. Instead, he bought commercial property in downtown Matthews and reopened his restaurant there in 1997. A year later he later sold the business, not the property, to the Raucci family. In May 2000 he opened the Italian Market on the rear of the property.

"Restaurant hours are crazy," Puleio remarked. "With the market, I can still give my customers the fresh products I like to make, but I can see my family, too."

Puleio's emphasis is on the quality and freshness of the ingredients. The week before Christmas he panicked because he couldn't find the fresh squid that's required for his traditional Christmas seafood salad. He said, "I try to do everything that's needed to be fresh and done right. I do it myself so it's properly done and tasteful. I take pride in what I do. I've been doing this for 30 years and it is what my reputation is based on."

The shop's interior reminds one of a small northern Jersey Italian deli without the wine. Walls are sparsely decorated and the emphasis is on product. Imported pastas fill one section of the shop; included in these are the pasta by Pasta di Gragnano. Gragnano is a small town south of Naples with a reputation for being the home of dried pasta. The pasta company is owned by a cooperative of local pasta makers who use antique bronze dies to make their locally grown wheat pastas. One of the more unusual shapes Puleio carries is the candele lunghi which is shaped like wedding candles, about two feet long and one half inch in diameter.

Another section of the shop boasts a selection of imported sauces, including vodka, clam, and Fantasia con Funghi Porcini which is a must buy if only to let the words roll off your tongue. If you're an anchovy fan, you'll find them in glass containers; a large 20-ounce jar is only $14.99.

Puleio says he tries to carry items people can't find in area grocery stores. Among the Progresso soups, for example, are Escarole and Chickarina, an Italian wedding soup. He also carries espresso and Italian cookies that he notes are eaten for breakfast. You can also find fennel-flavored pretzels, or treccine finocchio; orzato, a flavoring for water; olive oils; and vinegars.

In the deli case is a selection of cheeses and cold cuts, including imported Italian mortadella and a top quality prosciutto for $16.95 a pound, which is considerably less than in many specialty shops. Puleio also sells his own marinara sauce and meat sauces for $4.25. House-made salads such as antipasto, and calamari and scungilli are always available. During the Christmas holidays Puleio made tiramisu.

Created daily are house-made mozzarella, Italian sausages, and bread. His flavorful mild and hot sausages, accented with fennel, sell for $4.25 a pound, and a loaf of bread is $1.69. Puleio also makes New York-styled pizza. His Pizza Margherita uses the homemade marinara and fresh mozzarella. Domenico's also has calzones and classic hot subs like eggplant parmigiana ($4.95) and Italian cheesesteak ($5.95); as well as capicollo, salami, and provolone and fresh mozzarella and sliced tomato cold subs. More typical subs, such as roasted turkey and baby Swiss ($4.50) and vegetarian ($4.50) can be ordered as well. Large pans of lasagna and eggplant parmigiana can be ordered a day ahead of time.

Folks in southeast Charlotte and Matthews are lucky to have home-styled Italian delicacies on their doorstep to explore. But even if you don't live nearby -- or have a Vespa or play bocce -- Domenico's is worthy of a short jaunt.

Eaters' Digest
For 2003, The Southern Foodways Alliance turns its attention to Appalachia with a field trip to Asheville, August 1 through 3, and in discussions at the October 2-5 symposium in Oxford, Mississippi.

Two museums are featuring food exhibits. The Cape Fear Museum in Wilmington has an interactive exhibit focusing on the role of the Cape Fear River and Wilmington's port. Visitors can trace the import and export of North Carolina food over time, from rice, sweet potatoes, molasses and muscadine grapes, to peanuts and oysters. For more information: 910-341-4350. The Atlanta History Center is hosting "Ice Cream: the Whole Scoop" exhibit from December 26, 2002 - May 26, 2003. For more information: www.AtlantaHistory Center.com.

Do you have a restaurant tip, compliment, complaint? Do you know of a restaurant which has opened, closed, or should be reviewed? Does your restaurant or shop have news, menu changes, new additions to staff or building, upcoming cuisine or wine events? You can fax this information, at least 12 days in advance of event date, to Eaters' Digest: 704-944-3605, or leave voice mail: 704-522-8334, ext. 136.