Monster Mash in the Q.C.

Wolfman gets kicked off the kick line 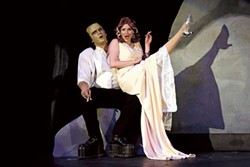 Monsters were on the loose across the Queen City over the weekend, ravishing women in Transylvania, slaughtering warriors in Denmark and sparking panic among their peoples. Fortunately, Mel Brooks and an anonymous 11th Century poet have provided heroes to combat these scourges, making it safe for the rest of us mere mortals to venture into Halton Theater on the CPCC campus and Duke Energy Theatre at Spirit Square.

Although Mary Shelley housed the horrific experiments of Victor Frankenstein in the German Rhineland, where the storied Frankenstein Castle still stands, Brooks seems to have moved Young Frankenstein to Transylvania so that Dracula can make a cameo appearance. An additional move to 1934 enabled Brooks and Gene Wilder, who co-wrote the 1974 screenplay and snatched the title role, to slice and dice the storyline and add new characters, most notably Victor's Americanized grandson, Dr. Frederick Frankenstein, who is mightily ashamed of his family's heritage.

The musical version, which toured here in 2011, remains nearly 20 minutes longer in CPCC Summer Theatre's premiere than the film. Brooks' original score adds a cluster of loony tunes to the notable musical moments we relish on screen, namely Peter Boyle's catatonic "Puttin' on the Ritz" and Madeline Kahn's ecstatic "Ah, Sweet Mystery of Life." All the best shticks are lovingly preserved: the horses' neighing at the very mention of Frau Blucher, the mechanical Nazi constable, Igor's shifting hump and Elizabeth's post-coital Bride of Frankenstein hairdo.

Brooks proved surprisingly adept at manipulating the medium when he musicalized The Producers, his biggest Broadway hit, and he's best here when he builds upon the juiciest movie bits. Fredrick's rapture at the wonders of "The Brain" reaches glitzy proportions, the Blind Hermit's horrendous hospitality toward The Monster gets a schmaltzy vaudeville prelude, and Elizabeth's ecstasy blossoms into an extra song outburst, "Deep Love" — so good that The Monster reprises it.

"Together Again," "Roll in the Hay," "Join the Family Business" and "He Vas My Boyfriend" all spark intermittently as Igor, Inga, Victor and Frau Blucher take turns luring Fredrick into replicating Victor's mad experiments. But the two songs accorded Inspector Kemp wear out the Prussian's welcome, and Elizabeth's derivative "Please Don't Touch Me" is an outright clunker when we've hardly begun. Nor does it help that Elizabeth's frigidity, bidding her fiance Frederick adieu, is embroidered with a vast ensemble of dancing couples who never touch each other.

Under the direction of Tom Hollis, the young CP cast throws caution to the winds navigating this uneven show. As a result, this new production often surpasses the touring version, particularly when choreographer Ron Chisholm is set loose on the climactic "Puttin' on the Ritz." Of course The Monster can become a tap-dancing whiz in three easy lessons! When the ensemble reaches full intensity, Wolfman appears out of nowhere and tries to break into the kick line, but The Monster tosses him out with a growl. If that happened on the tour, it wasn't nearly as funny.

Looking strapped for cash in recent seasons, CP's scenic and technical budgets seem to be sitting pretty this year, with set designer Jennifer O'Kelly's exploits — teaming with tech director Don Ketchum — surpassing her fine work on Boeing Boeing. Steve Gamble not only comes close to completely taming Halton's notorious sound system, he starts punctuating the presentation with thunder before Hollis delivers his curtain spiel. Lighting designer Gary Spivak is also champing at the mock horror bit, shining plentiful bursts of lightning on the curtain even before it rises.

Nor are we let down when the curtain goes up. The lecture hall is passable with its glowing-brain centerpiece, but it's the spooky laboratory where O'Kelly takes fullest advantage of the Halton's height, flying The Monster high above at the galvanic moment of his creation — on a massive slab hoisted by four thick chains. And yes, Fredrick and Inga take that same breathtaking ride when they couple.

If you saw Matthew Blake Johnson and Ashtyn Hutchings as the leads in Anything Goes earlier this summer, you'll need no further urging to come see them now. Adding a pair of mildly nerdy eyeglasses as Fredrick, Johnson excels at the nerdy comedy of "The Brain." Playing opposite a worthier love object in Hutchings, he also gets better chances to click in romantic comedy. In scantier costumes and a blond-bombshell wig, Hutchings as Inga isn't the sophisticate Reno Sweeney was — the same can be about Brooks vis-a-vis Cole Porter — but she's pleasingly seductive in "Roll in the Hay" and "Listen to Your Heart."

Ashton Guthrie does the heavy comedy lifting again as the creepy, humpbacked, incompetent Igor. Jacob Estes and Kelly Kohlman, previously paired as Moonface Martin and Bonnie Le Tour, also return as The Monster and Frau Blucher. Estes makes the most of his chance to hoof it in top hat and tux while Kohlman still seems to be ruminating about how best to project Blucher's dyspepsia. Until "Deep Love," I was on the verge of liking Kylee Verhoff as Elizabeth. She comes reasonably close on that showstopper.

No such problems with Rob Addison. You have to go back to the beginning of the CP's summer season to recall Addison's excellence as Fagin in Oliver! Here he serves his time as Inspector Kemp before returning to his full glory as the Hermit. Jolson himself would likely crack up seeing Addison on his knees earnestly begging for "Someone."

Citizens of the Universe has written an entirely new stage version of Beowulf, and the manner in which it was stitched together could easily be a modern Frankenstein story in itself. Of course, there's the thousand-year-old poem in what sounds like a non-alliterated translation. Layered on are the rampaging monster's inner thoughts, the presence of a poet in King Hrothgar's devastated court, and the monster's protestations that Beowulf's victory was an accident ? telltale signs that COTU may have dipped into Grendel, John Gardner's subversive retelling of the Old English epic from the monster's point of view.

Under the formalistic direction of Megan Sky, we're frequently reminded of theatre's ceremonial roots. Becca A. Whitesmith is our warrior storyteller, doubling as Wiglaf late in Act 2. Chesley Oxendine as the Danes' Shaper chips in with more lore — and multiple toasts — while Jesse Boykin Kimmel presides over the famed Herot mead hall as King Hrothgar. For some occult reason, COTU strips Beowulf of all his boasting when he arrives to save Hrothgar and his subjects, so Jeffrey J. Whiteside's portrayal of the great Geat makes him radically strong and silent until his battle with the dragon. As Warriors in Beowulf's service, Kathy Mullican and Stephen Skarecrow Russell trumpet their master's virtues, remembering a good majority of their lines.

Sporting a blood-red forehead and a large Hebrew-lettered tattoo below her collarbone, Zannah Kimbrel as Grendel is all you would — and wouldn't — expect the hellish spawn of Cain to be. Amy L. Snyder broods restlessly onstage throughout intermission as Grendel's Mother, showing us soon afterwards why you don't want to mess with her.