Mysterious Island, Sicario, The Walk among new home entertainment titles | View from the Couch | Creative Loafing Charlotte
Switch to the mobile version of this page. 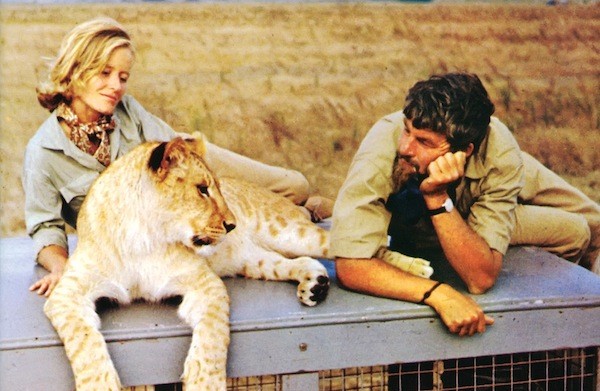 BORN FREE (1966). One of the many reasons why Trumbo earned my vote as the best film of 2015 is because of how it beautifully illustrates the manner in which blacklisted individuals (particularly writers) put one over on the rabid right-wing zealots by writing scripts under pseudonyms. While screenwriter Lester Cole, one of the "Hollywood Ten," actually stayed away from filmmaking during the Red Scare era after he was briefly jailed, he returned to the fold in the 1960s and wrote a handful of flicks, often under a made-up moniker. The most prominent (penned under the alias Gerald L.C. Copley) was Born Free, a splendid family film about real-life couple George and Joy Adamson (played by real-life couple Bill Travers and Virginia McKenna) and their adventures raising an orphaned lioness named Elsa in Kenya during the 1950s. George (a game warden) and especially Joy are smitten with the kitten-like cub, but as Elsa grows older, it becomes apparent that she might be more than even her devoted human parents can handle. Director James Hill tackles the material in a manner that relies more on naturalistic behavior than cheap theatrics (i.e. no scenes of Elsa covering her eyes with her paws after a human does something imbecilic), and cinematographer Kenneth Talbot largely captures the majesty of the Kenyan landscape (having lived in that country for two years, I can state that it's even more gorgeous than what's shown in this picture). Composer John Barry earned a pair of Oscars for Best Original Score and Best Original Song (shared with lyricist Don Black) for the title tune — 19 years later, he would win for an even greater score for another Kenya-set film, the Best Picture victor Out of Africa. Tragically, the real Adamsons would end up murdered; Joy by a former employee in 1980, George by bandits in 1989. 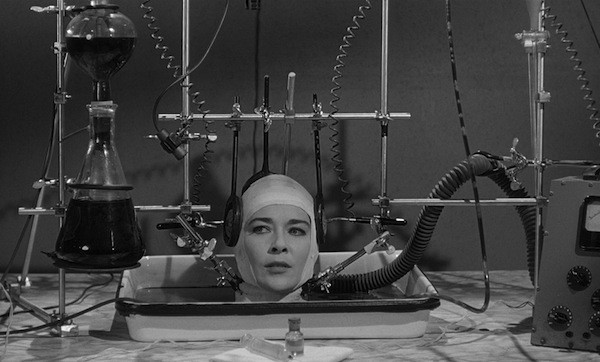 THE BRAIN THAT WOULDN'T DIE (1962). One of those so-bad-it's-good-to-experience-at-least-once-in-a-lifetime efforts, this grade-Z cheapie is pretty wretched yet deserves extra credit for being so brazenly bizarre. Dr. Bill Cortner (Herb Evers) is the film's resident mad scientist, with a simpering assistant (Leslie Daniel) at his side and a man-made monster (7-foot, 3-inch tall Eddie Carmel) locked in the closet. After Bill's fiancée Jan (Virginia Leith) gets decapitated in a car accident, he manages to save the head by placing it in a dish and attaching various tubes to it. Ignoring Jan's pleas to let her die, Bill instead plans to make her whole again by attaching her head to a voluptuous body. So with murder — and mammaries — on the mind, off he goes to ogle various strippers and models, leaving Jan behind in the lab to develop a telepathic relationship with the grotesquerie in the closet. Frequently making the rounds in an edited version, this new release from Shout! Factory offers the film uncut, thus allowing viewers to enjoy some additional gore and revel in the film's unrepentant sleaziness a bit longer.

As a bonus, the Blu-ray includes (in standard definition) the 1993 Mystery Science Theater 3000 episode of The Brain That Wouldn't Die, historically significant as the first show to feature Mike Nelson as the Satellite of Love's new host. It's a solid episode (great Mark Hamill dig: "Luke, join me or you'll star in Corvette Summer!"), as Mike works overtime easing into Joel Hodgson's role as the hapless human trapped in space. Other extras consist of audio commentary by film historian Steve Haberman and writer Tony Sasso; an alternate scene featuring nudity and created for the film's international cut; and a still gallery. 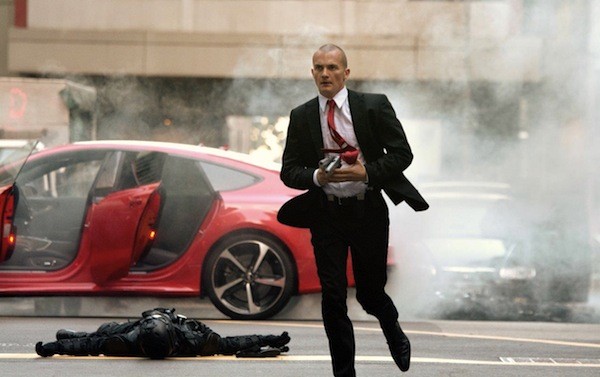 HITMAN: AGENT 47 (2015). Second only to Fifty Shades of Grey as the worst film of 2015 (see complete Best & Worst of 2015 here), Hitman: Agent 47 doesn't even get off one shot before its relative wretchedness comes into focus. The second movie based on the popular video game Hitman — the first, starring Timothy Olyphant, arrived back in 2007 — this one finds Rupert Friend taking over as the ruthless government assassin with the tarnished heart of gold (6 carat, at best). Hannah Ware is Katia, whom he must protect from all manner of evildoers. Thomas Kretschmann plays the evil syndicate head Le Clerq, whose moniker makes me think of Justin Timberlake as Le Coq in The Love Guru. And Zachary Quinto, Spock in the Star Trek reboot, co-stars as John Smith, a mysterious figure who starts out like Kyle Reese before morphing into a T-800. Speaking of Spock, while he has the ability to live long and prosper, the same may or may not be said of the career of debuting director Aleksander Bach, whose movie exhibits all the uniqueness and individuality of a Krispy Kreme doughnut rolling off the conveyor belt (and, hey, at least the pastry has flavor). Hitman: Agent 47 takes such pleasure in reveling in its own banality that it often feels like Bach and scripters Skip Woods (who also wrote the previous Hitman flick, as well as the atrocious A Good Day to Die Hard) and Michael Finch pilfered $35 million from studio coffers merely to proudly state that they punk'd everyone who actually wastes money to rent or (God forbid) buy this. Devoid of any distinguishing features in any department (even the acting, as all performers could have been replaced with mannequins and no one would have been the wiser), this ultimately feels like a placeholder banner ad, marking time on the screen until an actual movie starts. 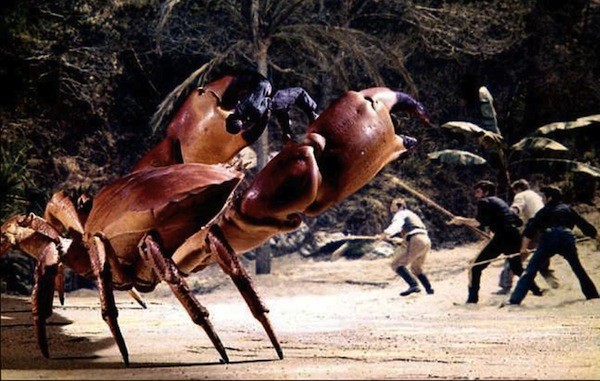 MYSTERIOUS ISLAND (1961). The release of any Ray Harryhausen extravaganza on Blu-ray is always a cause for celebration, and this one's no exception. More accurately, this is a re-release, as Twilight Time's initial limited run back in 2011 sold out in less than nine months. Based on Jules Verne's novel but with a healthy dollop of H.G. Wells' The Food of the Gods thrown in to allow Harryhausen to work his mojo, this Civil War-era tale finds a diverse assemblage — three Union soldiers (Michael Craig, Michael Callan and Dan Jackson), one Confederate grunt (Percy Herbert), a wise-cracking journalist (Gary Merrill, Bette Davis' All About Eve co-star and, by 1961, her ex-husband) and two proper English ladies (Joan Greenwood and Beth Rogan) — all stranded on an island that turns out to be inhabited by giant bees, a humongous crab, and other oversized threats. This scenario allows Harryhausen to showcase some superb stop-motion animation effects and the great Bernard Herrmann (Citizen Kane, Psycho, The 7th Voyage of Sinbad) to add another smashing score to his resume. As in the novel, the story's second half features the addition of 20,000 Leagues Under the Sea's Captain Nemo, and in the iconic role that's been played by (among others) James Mason, Patrick Stewart and Michael Caine, Herbert Lom delivers a thoughtful performance. 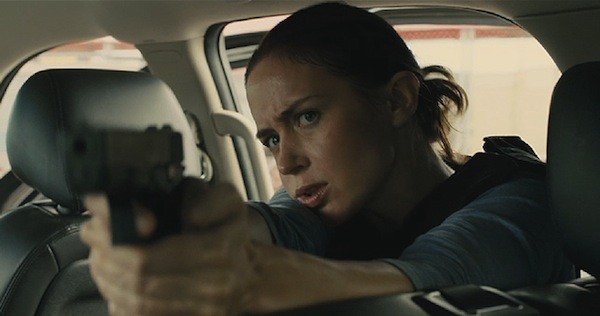 SICARIO (2015). Just missing out on my 10 Best of 2015 by a couple of slots (see complete Best & Worst of 2015 here), director Denis Villeneuve's Sicario is a Molotov cocktail of a movie, flaming fuels of helplessness and paranoia and scorching viewers' nerves in the process. Emily Blunt headlines as Kate Macer, an FBI agent whose take-charge, can-do demeanor in the field catches the eye of smarmy government operative Matt Graver (Josh Brolin). Graver wants Macer on his team, to aid in tackling the drug crisis taking place along the U.S.-Mexico border — the assignment places her alongside Alejandro (Benicio Del Toro), a shadowy figure who joins the outfit as it sets about trying to ascertain the identity of a particularly dangerous drug kingpin. With its forceful script by Taylor Sheridan, the film makes it clear that this is the type of poisonous war in which good intentions can get a person killed, and that the rules are made not only to be broken but to be ground into dust, like so much cocaine powder. With Kate representing the hero America thinks it probably deserves and Matt serving as the anti-hero America arguably needs, it's up to Alejandro to throw in any hints of moral ambiguity. Del Toro, in a marvelous performance, conveys the shifty nature of his character, who can morph from seemingly conscientious to casually cruel without raising an eyebrow. Renowned cinematographer Roger Deakins makes extraordinary use of shadows, while the score by Jóhann Jóhannsson grips us at every turn. Appropriately, Jóhannsson's contribution feels less like a soundtrack and more like a funeral dirge — the sort of morose melody likely to back Charon as he ferries the war's fallen across the Styx.

Blu-ray extras include a piece on the film's visual design; a featurette on Jóhannsson's score; and cast interviews. 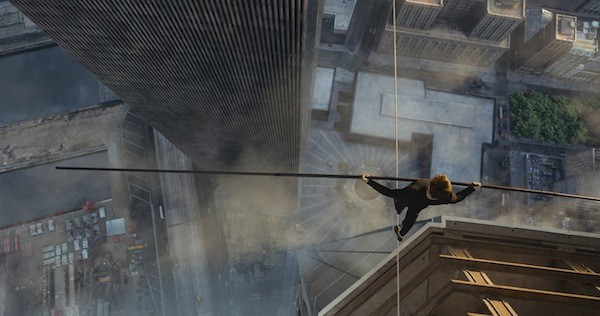 THE WALK (2015). Released in 2008, Man on Wire told the amazing true story of Philippe Petit, a French high-wire walker who in the 1970s could always be found risking his life climbing and traversing high points of note (including Notre Dame and Sydney Bridge). When Petit learned of plans to construct the World Trade Center, he waited impatiently over the years for the Twin Towers to become a reality, at which point he plotted to set up a line between the buildings so he could cross over with only a thin wire under his feet. Man on Wire snagged the Oscar for Best Documentary Feature — recognizing the continued greatness of this story, director Robert Zemeckis has responded with The Walk, a thrilling dramatization of this historic event. With such titles as Who Framed Roger Rabbit and Forrest Gump, Zemeckis has shown that he's one of those exemplary filmmakers who can wade knee-deep into dazzling effects work without ever losing sight of the piece's pathos and humanity (that is, as long as he stays away from misfires featuring motion-capture, like The Polar Express and A Christmas Carol). This picture follows suit — too bad it proved to be a major box office bust. It takes its time acquainting us with Petit (charmingly played by Joseph Gordon-Levitt) and his comrades in arms, fellow visionaries who have all agreed to help him achieve his goal of spanning that imposing empty space between the two towers. It covers the preparations intently, taking care to dot every cinematic i and cross every celluloid t. Only then does Zemeckis hit us with the spectacle: The final half-hour, as Petit takes to the wire, is basically one sustained money shot, with superb effects conveying not only the sheer lunacy of the undertaking but also the determination of one man to achieve the seemingly impossible.

Blu-ray extras include deleted scenes; a piece showing Gordon-Levitt learning how to walk the wire from the real Petit; and a look at the effects employed to create the historic jaunt.