Girls' night out with card tricks and beefcake 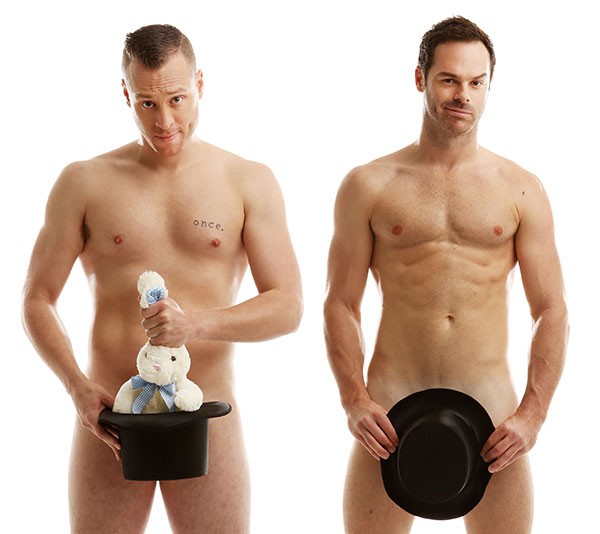 It turns out that the two Aussies, Chris Wayne and Mike Tyler, who make up The Naked Magic Show were almost totally in the buff during the latter moments of the show. Only body mics and handy top hats were kept over their genitalia. But my curiosity about how much nudity I would see at McGlohon Theater last Wednesday (and how long I would see it) was preceded by some tingling suspense about who would turn out for the 9:30 performance.

There's a lot to clean up after a performance of The Naked Magic Show, which mixes magic, comedy, and as much audience participation as I've ever seen. There's one trick that involves everyone in the audience littering the hall while shouting "Fuck it!" as they let their confetti fly, and the show ends with sustained cloudbursts of glitter as the naked magicians "come" for the audience. So while it seemed strange that the house hadn't opened when 9:30 rolled around, we didn't realize how much cleanup and setup was going on inside the hall after the earlier 7 p.m. show.

With this delay, there was more than the usual amount of time to mingle with the crowd in the McGlohon lobby — and to determine they weren't the usual theater bunch. After years on the road, Wayne and Tyler may have been feigning curiosity when they bluntly asked who was out there. Date nighters? Gay guys? No, they were far, far outnumbered by the girls-night-out throng, their absolute dominance augmented by the awesome volume of their shrieking response.

Even when they were clothed, the Aussies' magic wasn't in an up-the-sleeve vein, trending toward card tricks and mentalist miracles. One fellow out of the audience entrusted his cellphone to the duo, putting it in a manila envelope among four or five others, and watching with growing concern after the envelopes were shuffled. Chris smashed one hidden phone after another with a mallet. In the upshot of this shuffling, shattering mumbo jumbo, the guy's phone wound up in the butt of an inflatable sex doll.

Before that episode, the guys brandished a pair of inflatable penises, and Chris featured his preternaturally long tongue. But perhaps uncannier than tongue-zilla or the five-phone monty was the trick that lodged in everyone's pocket or purse in red envelopes that ushers handed to us when we first entered the hall. When we were instructed to open them, we found four wallet-sized photos inside that we were instructed to shuffle and tear, face-down. After taking the top slip of paper, there was a long regimen of cutting, rearranging, and "Fuck it!" tossing as we discarded six of the remaining seven halves of photos, including some elements of choice that seemed to lead to a random outcome.

It took me over four days to figure out why the last remaining half mated perfectly with the half that I'd put in my shirt pocket before the elimination process. Odds against that were 6-to-1, right?

The end of the show, leading up to the celebratory cum-bustion, had an elegant structure to it, for Mike and Chris had a little competition to determine which of them would be the first to strip. Two eager ladies were chosen out of the audience to buckle and tie the guys into straitjackets, and the magician who escaped last would have to strip first. Well, one of the ladies — I forget whether it was Amanda or Maddie — was really eager for this sadistic pleasure, insisting that she switch from Mike to Chris for her tying tasks.

Adding to the comedy, Chris tore his arms free from bondage before Amanda and Maddie were settled back in their seats, calling on a nearly-as-eager gay guy to do the retying. Chris seemed to be the glibber of the two escape artists, but Mike had the better abs. All I'll say about the naked tricks is knife, rope, scissors, and another deck of cards.

The whole dynamic seemed to change when all the guys' cheeks were finally exposed and the last volunteers walked onstage. With just two more cities left in their 32-city tour across the US and Canada, Chris had remarked early in the show that they had forgotten how different it could be performing in the round. Looking up in the balcony, he observed that the folks seated up on the sides of the stage were getting more than their money's worth.

That made it all the more important for the woman holding the top hat over Chris's package to keep a steady hand while he performed his rope trick. Compounding her anxiety, other ladies in the audience were loudly urging her to let it drop. I wouldn't be shocked to learn that some of those lust-enflamed ladies had imbibed a drink or three. Perfect preparation.

Chris and Mike have moved on to Louisville and Indianapolis, but the steam hasn't stopped in Charlotte. Parks and Recreation stars Nick Offerman and Megan Mullally are promising to "yank the britches" off their real-life marriage in Summer of 69: No Apostrophe at Ovens Auditorium this week while Scorpio Nightclub hosts an epic three-day Miss Gay America Pageant on raunchy Freedom Drive. When those two sizzlers have come and gone, Charlotte's supreme aerialists, Caroline Calouche & Company, will take over Booth Playhouse next weekend for three performances of Rouge, their cabaret-style presentation for mature audiences.

Nor are wholesome and serious shows in summer retreat. Disney's least fantastical musical, Newsies, returns to Belk Theater with its inspirational ensemble of striking newsboys. Duke Energy Theatre gets two weekends of Seminar from Three Bone Theatre. Theresa Rebeck's drama explores what happens in a writing class when the brilliant sought-after writer who is teaching this select group needs validation as much as his young students. Of course, there are different kinds of validation in this feast of seduction, manipulation, betrayal, and copulation — peppered with writing tips.

Perhaps this week's most intriguing new show will open on Thursday at South End's C3 Labs. Presented by TAPROOT in collaboration with Jeffrey Barninger of Union Shop Studios, Queenie's Farewell Block Party is one part performance, one part art installation, and one part close-to-home history. During the interactive performance, the audience meets Queenie and her neighbors on the night before tenants of the South End Motel are evicted.

We don't exactly live in a community that cherishes its heritage or the integrity of its neighborhoods. So even if Queenie's party views the pros and cons of urban renewal objectively, it will call attention to the bull component of Charlotte's ongoing bulldozing — a component that often seems forgotten by city boosters, developers, politicos, and craven journalists.