When Creative Loafing wrote in June about the flood of young candidates running for Charlotte City Council, we asked whether it could help turnout among young voters in the usually low-interest local primaries.

While the turnout for yesterday's primaries was not impressive — just under 8 percent — young candidates did very well. Three new candidates under 40 — Braxton Winston, Larken Egleston and Justin Harlow — will move on to the general election, while Matt Newton forced a runoff in District 5. Dimple Ajmera, who currently represents District 5, stayed alive in her first at-large bid, as well.

Incumbents who lost their spots last night included at-large representative Claire Fallon and District 1 representative Patsy Kinsey, whose approach to development in Plaza Midwood was increasingly inconsistent with the desires of the neighborhood's residents. Most notably in the list of incumbent losses, Mayor Jennifer Roberts lost her spot as the democratic candidate to Mayor Pro Tem Vi Lyles.

Some folks have called Vi Lyles' defeat of Mayor Roberts "a stunning upset," which is bit of a stretch, but it was a surprise to see Lyles win so comfortably.

Beginning with early vote results, Lyles had a 10 percent lead over Roberts and it hovered there throughout the night as precincts reported. It never looks as if Lyles would even be in danger of a runoff, let alone a loss.

The contest between Ajmera and McGill for the last spot in this top-four-move-on primary was under 1,000 for much of the night, but Ajmera was able to eke it out.

Creative Loafing was at VBGB, where Winston and his supporters were watching as the results came in. Winston sat comfortably in the third spot for much of the night, but at around 10 p.m., he took second place in votes over incumbent Julie Eiselt. It was then that CL spoke with him about his thoughts on the results, as it became clear that he would be moving on to the general election (please bear with us on the blurriness, it focuses after a few seconds).

Braxton Winston on Primary Night from Creative Loafing on Vimeo.

If anyone was expected to need the young vote to pull this off, it was Egleston. He is popular in the fast developing neighborhoods like NoDa, Elizabeth and Plaza Midwood (where he lives and is active in the neighborhood association), although it was unclear if that popularity would translate into turnout and, therefore, votes. It did. 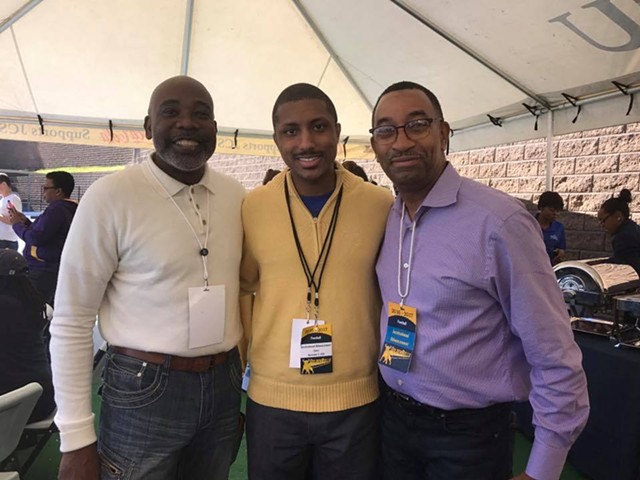 Clearly the closest battle of the night, the young dentist from Atlanta eked out a win against community leader J'Tanya Adams, founder of Historic West End Partners. Don't ever let someone tell you your vote doesn't count, as this one was decided by just 13.

This is how primary elections usually go, with the incumbent pulling off a relatively comfortable win thanks to their past work in the community or simply name recognition or some mix of the both. To give credit where due, Phipps did something right now to lose his seat like some of his fellow council members.

With all the interest in the former Eastland Mall site, there were perhaps more eyes on this race than any other district, and now the plot thickens. With six candidates running, this race was also most likely to end up in a runoff, with no candidates surpassing 40 percent of the vote. The runoff will take place on October 10.

The only way Kenny Smith was going to lose his stranglehold grip on the heavily-Republican district 6 was to give it up, and that's what he did when he announced his candidacy for mayor. Smith won the Republican bid easily last night, and Bokhari, with endorsements from local right-wing faves like Pat McCrory and Robert Pittenger, will surely take his spot come November.