Of Monsters and Men eyes longevity 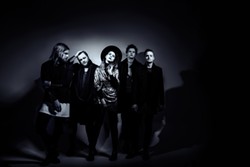 Iceland has never been much of a music destination when it comes to a worldwide notoriety of bands that come from the Scandinavian country. Until recently, it was Bjork, Sigur Rós and... well, that's about it, until a couple of years ago.

In 2012, the Icelandic indie-folk outfit Of Monsters and Men released "Little Talks." Sometime between then and a performance on Saturday Night Live in July of 2013, the band's popularity took off. At Bonnaroo in 2013, the band drew one of the largest crowds ever in front of the smaller of the two main stages, causing many to wonder why they weren't on the bigger stage. The group's popularity, which has carried over to the band's recently released sophomore album is also bringing them to new cities. The band will make its Charlotte debut at the Uptown Amphitheatre on Oct. 8.

It's been steady growth for the band, and singer/guitarist Ragnar 'Raggi' Þórhallsson says festivals like Bonnaroo are where Of Monsters and Men could truly see the band's popularity growing.

"The best way for us to see it, without looking at numbers, is to see the crowds getting bigger," Þórhallsson says. "The more people there are, the more excited I get. It's adrenaline."

Growing popularity made it difficult for the band to record its follow-up. Tour dates were added on to tour dates in what seemed like a never-ending cycle. Þórhallsson thinks it will be easier this time around.

"This time around, we have it mapped out a bit better and have a picture of when we're going to stop touring and get into the writing mode," he says.

Þórhallsson says the band never had huge aspirations of leaving Iceland when it first started. They weren't even sure it was possible. He says it was basically a hobby, until they met their manager who got things rolling.

"We're very proud to come from Iceland, but also to have done what we've done," Þórhallsson says. "Not a lot of bands are able to do it, so just being able to play music."

He's also proud that the success Of Monsters and Men has had has directed more eyes toward Iceland. "Just like Bjork and Sigur Rós did for us — they paved the way for us," Þórhallsson says. "They're the two main exports from Iceland before us. We're doing the same now for younger bands."

Though Iceland has plenty of traditional folk music, Þórhallsson doesn't see Of Monsters and Men as a folk band in any way. He says people might label them with that genre because of their storytelling tendencies and acoustic guitars though. "It's just us expressing ourselves," he says.

For the band's current tour, they're playing a mixture of both albums. Where the first, My Head is an Animal, had darker tones, the new one, Beneath the Skin, is more introspective. While the band felt pressure due to its success when they returned to the studio to record the follow-up, Þórhallsson says you have to do your best not to think about it.

"You have to push it aside and think about why you're writing music," he says. "The answer's always going to be for yourself and because you enjoy it. You just have to find that spark. That's corny though, sorry."

The band's style is often centered around the trading vocals of Þórhallsson and Nanna Bryndís Hilmarsdóttir. One might serve as a back up, they might trade verses or they could sing in harmony. It all depends on what serves the song the best.

"Sometimes we write something and it's feels like it should be for someone else to sing it," Þórhallsson says. "Sometimes it's a matter of what sounds best. It's a lot about what voice starts the song and what voice comes in. If I start a song and Nanna comes in, it's a different feeling than the other way around. We play around with it and I think about it a lot."

Beneath the Skin's more personal tone has also dictated who sings which parts, though Þórhallsson says he and Nanna can both relate to the lyrics they each write. "If there's something really important to me, then I would sing it," he says. "But even if Nanna sings something that is personal to me, it's probably not something I'm thinking about constantly."

Þórhallsson says he hasn't listened to the first album in years, and this one has more layers to it he hopes fans will notice.

"I think it's more complex," he says. "I think it's maybe not as approachable. I think it's going to last longer. I don't know what I'm saying... For me, at least, there are a lot of little things that I notice on this album that I don't hear on the first. I'm already thinking about the next album a lot."