On the Road's enduring appeal

'Behind us lay the whole of America' 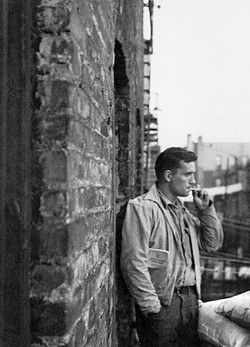 I realized Jack Kerouac had made his transition to yet another generation of college students when I noticed something missing from my closet after the holiday break in January. The old grey Kerouac sweatshirt that dated back to my own college years in the early '80s was nowhere to be found.

"Your daughter headed back to school this morning," my fiancée, Tarrah, said with a guilty smile. She was referring to her daughter, Amber, who will soon be my stepdaughter. Amber is Tarrah's daughter when the two of them are cuddled on the couch together, watching RuPaul's Drag Race on the Logo Network; she's my daughter when she "borrows" our cool "vintage" clothing or turns us on to some new adventurous indie band.

Apparently, my daughter — let's just forget this "step" stuff — had spent a recent day Wikipedia-ing Kerouac because she was so smitten by the sweatshirt she found in my closet. And apparently, she concluded that Kerouac still has enough cool cred that this article of vintage clothing was worth lifting and wearing among the hipsterati at UNC-Greensboro.

It's not just a little mind-boggling for me to think that Amber will now be sporting the same Beat Generation icon as she bops along Tate Street near UNCG that I wore when I bopped along the same strip 30 years ago. Back then, I'd be on my way to a pizza joint called Friday's to see a little indie band called R.E.M. Today, Friday's is long gone, replaced by an Indian restaurant. R.E.M., of course, went on to become one of the biggest bands in the world and then broke up three decades later.

And now, Walter Salles has made a movie based on Kerouac's enduring bohemian coming-of-age novel On the Road, such a classic of alternative literature that one would have thought some earlier indie director — Gus Van Sant in the '90s or Jim Jarmusch in the '80s — would have already brought it to the big screen. Even in the early '80s, when my generation of young bohos worshiped at the alter of Kerouac, the author had been dead for more than a decade, and his '50s literary heyday was even farther back in the rearview mirror. And yet Kerouac's words still seemed so alive:

... the only people for me are the mad ones, the ones who are mad to live, mad to talk, mad to be saved, desirous of everything at the same time, the ones that never yawn or say a commonplace thing, but burn, burn, burn like fabulous yellow roman candles exploding like spiders across the stars and in the middle you see the blue centerlight pop and everybody goes "Awww!"

Kerouac was an unbridled writer. He threw structure to the wind. His prose was visceral, heady, spiritual — the exact opposite of the more pretentious and academic works coming from establishment literary circles of the 1950s. And that got him into trouble among some of the establishment literary figures, many of whom considered Kerouac and his Beat cohorts like poet Allen Ginsberg to be violent anti-intellectuals. Neo-con writer Norman Podhoretz famously penned a 1958 Partisan Review piece, "The Know-Nothing Bohemians," which suggested a link between the Beat Generation's "primitive," "spontaneous" writing and criminal delinquency. The Beats, Podhoretz wrote, were "hostile to civilization"; Kerouac wanted to "kill the intellectuals who can talk coherently, kill the people who can sit still for five minutes at a time ..."

Podhoretz's screed inspired Ginsberg to fire back in the pages of the Village Voice: "His criticism of Jack's spontaneous bop prosody shows that he can't tell the difference between words as rhythm and words as in diction. The bit about anti-intellectualism is a piece of vanity ... The trouble is that Podhoretz has a great ridiculous fat-bellied mind which he pats too often." Ginsberg went on to describe Kerouac as "the greatest craftsman writing today. He writes continuously, can write a hundred words a minute, and gets better each time ... Jack's style was discovered — arrived upon instinctively, not copied — theoretical-like from a theology."

It was all very exciting to read about this wild literary jousting a quarter of a century later, in the 1980s. (And it's amusing to note that Podhoretz would forever remain clueless about the world around him; in 2010, he wrote, "I hereby declare that I would rather be ruled by the Tea Party than by the Democratic Party, and I would rather have Sarah Palin sitting in the Oval Office than Barack Obama.") But it was even more exciting to actually read Kerouac's amphetamine prose, which spoke to my own ADHD generation as clearly and relevantly as it had to the original tiny coterie of late-'50s New York City bohemians. And not only Kerouac's words, but also the words of Ginsberg, James Baldwin, William S. Burroughs, LeRoi Jones (now Amiri Baraka) and Gregory Corso, not to mention all the unsung women of the Beat Generation: Hettie Jones, Diane di Prima, Joyce Johnson and so many others. Those writers and their characters opened minds, told kids like me, from small towns across Flyover America, that there was a much bigger world out there and that we could be part of it.

Today, more than a half-century since the publication of On the Road, that bigger world is a click away. There's little that an innocent kid from a small town doesn't know that he or she can't Google. So, the question is: How will the adrenaline rush of On the Road read to a young audience in 2013 watching the movie version on Netflix while texting friends? Kerouac himself was as ADHD as any plugged-in kid today, but if Salles hasn't integrated the author's nonstop amphetamine buzz onscreen in a way that works in a world of digital multitasking, it's easy to see how this meandering road story could wind up in a ditch.

On the other hand, the novel's revved-up lack of a conventional narrative may be just what the doctor ordered in a hyper-attention-deficit era. (I'm going to suspend judgment on the film's negative reviews, including the one accompanying this essay, until I see it.) One thing's for sure: Even if Amber and I sit side-by-side on the couch in our living room and watch On the Road together, I will never be able to occupy her world, her perspective or her context, as she takes it in, any more than a '50s-era bohemian could have occupied my world and perspective when I read Kerouac in the '80s. I won't be able to see Sal Paradise and Dean Moriarty's search for meaning through Amber's eyes. And at that point, Jack Kerouac will no longer be mine; he will be hers. Just like the sweatshirt.

On the Road is not showing in any theaters in the area. 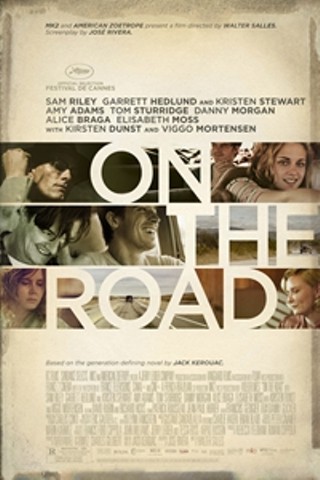