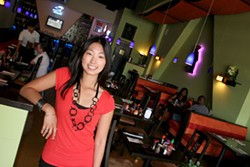 "See how that one beer bottle has moved towards the end of the bar shelf?" our server -- who turned out to restaurateur Lian Gabriel -- pointed out. "For a long time we thought the place was haunted -- you know, because of the cemetery being right beside the shopping center." She laughed and added, "Then we found out it was the vibrations from our own [kitchen] hood." Gabriel's good humor and straight-shooting personality make up the engine that pulls this Vietnamese restaurant. The 90-seat Pho Real Vietnamese Restaurant and Bar opened November 2005 on the second floor of a strip shopping center, which is on restaurant overload. This is a concern because retail generally brings people to restaurants, yet this shopping center seems to be the food court without the mall.

But small and trendy Pho Real is a beacon. Gabriel has eschewed many traditional and expected Asian artifacts and instead has chosen a color palate of buoyant bamboo green highlighted by booths upholstered in orange and red with cobalt blue fixtures hanging over the bare topped tables and a stained concrete floor. The bar -- with dancing beer bottles -- flanks the far end of the dining room.

For Gabriel, a graduate of UNCC with a degree in management with a concentration in entrepreneurship, owning a restaurant is a fulfillment of her dream. Although she is of Philippine decent and is Canadian by birth, opening a Vietnamese restaurant with partner Mimi Vu seemed to make sense. Vu's mother became owner of Pho An Hoa, a bare bones soup and noodle shop on Central Avenue several years ago. Why a Vietnamese restaurant? "The University area didn't have one. The closest one is over six miles away." And this is what is both helpful and refreshing about Gabriel's approach. She hasn't over-glamorized the restaurant business, and for her it's strictly numbers.

Choosing a pho shop may have been a no-brainer as well since pho has become the healthy "fast food" of choice and pho shops on the West Coast are as common as drug stores are in Charlotte. Although most people don't differentiate the regional differences, pho (typically a breakfast choice in Viet Nam) is either northern Vietnamese style (more velvety) or southern Vietnamese (spunky). But basically the diner can doctor the soup to individual taste. A well made pho is all about the broth and at Pho Real the beef broth is fragrant, although lacking the undertones of anise and cloves. However, after a hit of citric lime, the addition of crunchy bean sprouts and holy basil, the soup is ready. The thin rice noodles (thick is offered as well) were al dente when served and then soft and slippery, while the beef was sliced paper thin and easy to pick up with a leaf of basil to dunk into a side mix of hoisin sauce and Sriracha -- that's the chili sauce with the rooster on the bottle. Pho is offered in four sizes: "young'in" ($4) to family sized ($7.50).

Although the pho is the main attraction, the starters bear mentioning. A flavorful chicken wing is stuffed with minced pork, chicken and mushroom and then thinly sliced on the bone. The fried quail is moist and quite tasty while the crispy rolls, cigar sized, are filled with slivers of taro, shrimp and chicken. The simple translucent spring roll is filled with the predictable bland vegetable sticks, but is served with choice of sauces.

Beer, tea and Vietnamese coffee seem to be the beverages of choice, but a few wines are offered by the glass and some specialty bar drinks are as well, including the "Long Liantea" with rum, vodka, gin, tequila, Grand Marnier and Coke. Gabriel oversees her place with a vigilant eye. At times, several servers are used to present all the dishes at a table. Most servers speak English as their first language but grew up with Vietnamese cuisine and are quite helpful if you have questions.

Of note, though, is the oddly diverting music selection. First up one evening was the theme from Gone with the Wind, which reminds me of fried chicken and raw turnips, then music from Doctor Zhivago, which makes me feel icy cold even in summer. These were followed by the Latino dance sequence score from West Side Story. Why not choose music that corresponds to the cuisine? Perhaps a duet from Miss Saigon?

However, with big flavors and big portions, Pho Real seems to have found its niche in the University area. Finding it -- upstairs and beyond a zillion other food outposts and a cemetery, will be much more difficult than selecting a delightful dish off its menu.

Hours: 11am until 10pm Monday through Thursday, until 11pm Friday and Saturday and 11am until 9pm on Sunday. AmEx, MC, Visa, Dis.