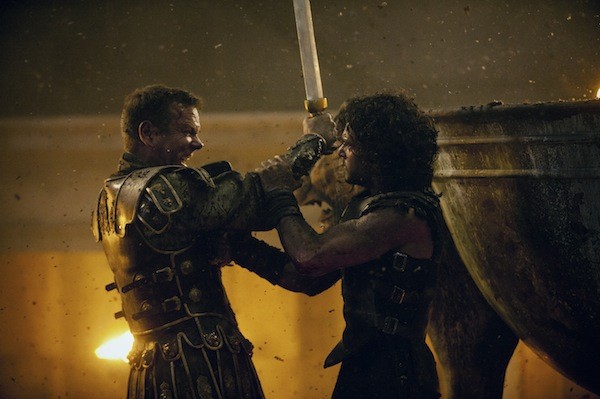 Just as James Cameron used a historical disaster as the backdrop to a romance between two kids from opposite sides of the tracks, so too does director Paul W.S. Anderson (Resident Evil, The Three Musketeers). But that's where the comparison ends, because whereas Cameron managed to make Titanic as majestic as the ship it honored, Anderson's film comparatively feels like a toy boat bobbing upside down in the bathtub.

Set in 79 A.D., Pompeii centers on Milo, who as a little boy watches his entire village (including his parents) get slaughtered by a Roman leader named Corvus (Kiefer Sutherland). Cut to 17 years later, and Milo (now played by Game of Thrones' Kit Harington) is a slave whose skill in the gladiator arena means that he can provide good entertainment for the masses. He's shipped off to Pompeii, where he befriends a fellow gladiator named Atticus (Adewale Akinnuoye-Agbaje) and catches the eye of the upper-crust Cassia (Emily Browning). But Corvus reenters the picture, lusting after Cassia and doing his damnedest to kill Milo. Every once in a while, the actors sway back and forth and some stuff crashes to the floor to remind viewers that there's a volcano bubbling in the background, ready to blow its lid. And after a few of these false-alarm earthquakes, Mount Vesuvius finally does just that, erupting as powerfully as porn star James Deen in one of his 1,098 films.

Tedious in the extreme, Pompeii is basically an amateurish amalgamation of such sword'n'sandal works as Spartacus, Game of Thrones and Gladiator, although it definitely sets its compass to Titanic, right down to a scene that swaps out that film's lifesaving flotsam for a mighty steed. And while imitation can indeed be the sincerest form of flattery, that's not the case when the results are as ham-fisted as those here. The 3-D effects are negligible, the tidal wave set-piece is often risible (particularly the ship that smoothly sails down the street) and Sutherland delivers another awful performance (yeah, yeah, he's beloved thanks to TV's 24, but ever check out most of his film work?). And while I have to assume it was unintentional, it's worth noting that the three most likable characters are all black, and without exception all are sacrificed so that our lily-white lovebirds might have a better chance of escaping a fiery death.

When it's not busy tracking the fortunes of our mopey lovers or chucking Milo into the arena for gladiator-on-gladiator action (these skirmishes are the highlights of the film), the script (credited to three writers) wastes its time on a business deal between Corvus and Cassia's father (Jared Harris), the sort of arid drivel that immediately landed The Phantom Menace in hot water when its heroes opened the movie discussing trade routes and taxes. Still, the presence of Cassia's pop allows him the opportunity to exclaim "Juno's tit!" the way we utter "Good God!" or "Holy smokes!" Now, I'm not sure "Juno's tit!" is the best way to evoke period authenticity, but "By the hymen of Olivia Newton-John!" was already taken by Will Ferrell.