300: Rise of an Empire: Eva destruction | Reviews | Creative Loafing Charlotte
Switch to the mobile version of this page.

300: Rise of an Empire: Eva destruction 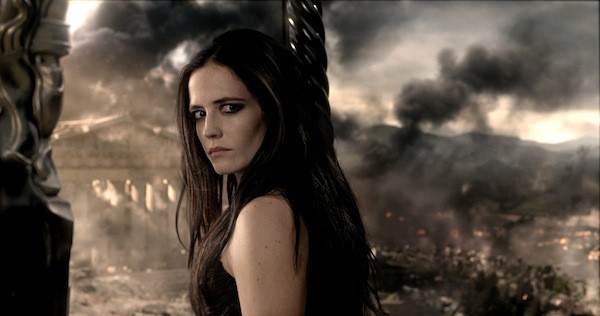 The belated sequel to the 2007 international blockbuster 300, 300: Rise of an Empire is the sort of film that's so monumentally awful, it effectively shuts down all critical reasoning and forces one to merely babble in clichés. In short, I've seen better film on teeth. This movie wasn't released; it escaped. And I wouldn't trust Noam Murro to direct traffic down a one-way street.

Alas, I'm not paid the small bucks to merely regurgitate well-worn witticisms, so let me make an effort to stir from my stupor.

Wholly unnecessary from a narrative angle — after all, the hunky heroes from the first film all died — this elects to follow a group of Greek warriors whose adventures are largely running concurrent to those of the 300. (This brings to mind how Life of Brian focused on a guy whose life paralleled that of Jesus, the main difference being that the Monty Python flick was, you know, good.) General Themistokles (Sullivan Stapleton) is in charge, and with the Persian army on the march, he seeks help from all quarters — more so once he hears of the deaths of the 300. As it stands, though, his motley crew is no match for the massive Persian forces that are being led by Artemisia (Eva Green), a warrior woman whose viciousness knows no bounds (in one scene, we see her kill a prisoner and then lock lips with his severed head).

I wasn't the biggest fan of Zack Snyder's 300, but that film at least sported a then-distinctive look as well as offered Gerald Butler one of his few decent roles. This follow-up attempts to emulate its predecessor's visual palate but only winds up as an eyesore. The gore is neither realistic nor entertainingly over-the-top; instead, it appears storyboarded to death, with much of the bloodletting presented in studied slow motion. It's a dull, deadening approach, the type that can probably only be truly appreciated by 15-year-old boys and serial killers. The shooting style is also the sort that annoyingly accentuates every piece of dust or ash floating by (well, CGIing by), and I half-hoped to see one of the dust bunnies from My Neighbor Totoro wafting down the screen, if only to perk me up.

Those who lusted over the likes of Butler, Dominic West and Michael Fassbender in the first film — or even became emotionally involved in their struggles — had best temper any expectations this time around. Led by the snoozy Stapleton, these vanilla actors inspire indifference more than anything else, and it's hard to care whether they live or die at the hands of Artemisia.

That brings us to Eva Green. As Artemisia, she's the only positive ingredient to be found in this entire film. Absolutely ferocious in the part, she's the sole performer who manages to command our attention. And yet I was troubled by the particulars of her role. In flashbacks, we see her as a young girl, watching the Greeks murder her father and rape and kill her mother. Then she's tossed into a prison, where grotesque men repeatedly rape her throughout her childhood, before she's thrown out onto the street to die. Watching these scenes, my only thought was, shouldn't she be the heroine of this film? Bruce Wayne suffered far less and became the noble Batman; ditto countless other male heroes. Here, this poor woman suffers horribly and yet is cast as the villain. I'm not really surprised by this development — the studio clearly knows its misogynistic fanbase, understanding that they won't think twice about the travails of a member of the supposedly inferior sex, especially when there are so many macho men to admire. But for a film already straining under the weight of cardboard characters, arid dialogue, erratic pacing and other deficiencies, adding this icky subtext only serves to make the finished product that much more of a travesty.