Popbar franchisees have been patiently waiting for the right spot, and they've got it

Not just a pop up

After the first three hours of Popbar's soft opening on Dec. 15, during which employees handed out free gelato and sorbet pops to as many as 30 or 40 people at a time who were flooding their tiny shop for frozen treats on the cold winter day, franchisee Kia Lyons needed to regroup. She hung a sign on the shop's door that read, "Give us 10 minutes," to give her staff some breathing time after those first three hours.

Despite the sometimes chaotic feel of that first rush, Lyons described that first day of running a business as more of "a calm feel," compared to everything her and her husband Clarence had been through in trying to open up Popbar, the franchise's first North Carolina location, over the past two years.

On the day following the soft opening, Creative Loafing sat down with Lyons to discuss why it was worth the wait. 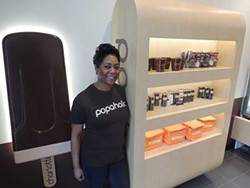 Creative Loafing: How did you and Clarence decide to get involved with Popbar?

Kia Lyons: We talked about starting a business together while we were dating. Then two years ago we got married and I moved here. We wanted to do something that was outside of the box. We always thought about maybe doing ice cream. Instead of looking at your typical things that are already out there, I did some research and Popbar came up. I said, "Oh, I've never heard of that before." We contacted the franchise and scheduled a time for us to go up there [to New York]. We went in January 2015 and we tried a bunch of different flavors and fell in love and we're like, "We gotta do this."

Opening a frozen treat store in December is a bold move. Was there any concern about demand?

I'm not concerned. If we had it our way, we would have been open last summer, but having the right location is way more important than just being open. So, it was worth the nine months we spent looking to have this space.

To me, and to a lot of people, NoDa is a destination area. You may live across town but you're going to come to NoDa to go to Cabo Fish Taco or Neighborhood Theatre and that is one of the things that is appealing to anybody who wants to open up a business, a restaurant or a specialty shop. When we first got started, there wasn't anything available here. When it popped up, I was like, "Oh my God." I filled out the application in a day.

I already am seeing some people all the time. I know people's dogs. I'm learning names. I know the people upstairs. That relationship with the community is important to my husband and I, too. Even though we're a franchise, we still like the idea of having a mom and pop feeling.

One slogan painted on the wall here says "Don't call it a popsicle." What makes your product different?

All of our products are all natural. Sorbets have 70-80 percent fruit in them. We don't use any artificial ingredients. With our toppings, you're never going to see Oreo or gummy bears or any of that stuff. You'll see hazelnut, pistachio, coconut, even our all-natural chocolate sprinkles. If we do something crazy it would probably be peppermint.

The consistency of the pops are different because gelatos are creamier, the sorbets are fruitier. The customization sets us apart. We already have over 40 recipes that we can put out, and then when you customize it the possibilities are endless with that.