Proud To Be Plump 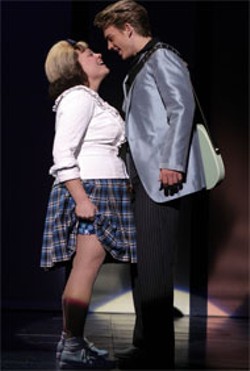 What's often so off-putting about rock musicals is their incessant pretension - their blatant aspiration to be regarded as operas. With three chords and two over-amped guitars?

That's why Hairspray is such a breath of fresh air, even if the whole piled-high mess is spiked with aerosol propellants. From the moment the hot fuchsia curtain goes up, the aesthetic is pure bubblegum — a bouncy blob of pink and sugar. Yes, the music by Marc Shaiman righteously rocks, gospelizes, twists and doo-wops its gum-popping little heart out.

But listen, nobody's dying of AIDS, starving, or in any other melodramatic mortal peril. This is Tracy Turnblad, a plumpish teen waking up in Baltimore on an ordinary school day in 1962, and by the time she sits down to dinner with her eccentric folks, a doorway will open to her dreams.

Due to an unplanned pregnancy, one of the dancers must be replaced on The Corny Collins Show, the after-school TV choice of Baltimore teenyboppers. Two adolescent grails offer themselves tantalizingly to Corny's devotees. There's the sweet smell of instant TV celebrity for the coed who catches Collins' eye. With it comes the aphrodisiac of sharing the same dance floor with teenage heartthrob Link Larkin, the guy with the slicked-back locks and the Elvis moves.

Adolescent hormones seem to ooze through the oily pores of the opening scenes, particularly when Tracy and her best friend Penny Pingleton — in "Mama, I'm a Big Girl Now" — plead with their mothers for permission to cut school tomorrow and take a stab at stardom at the WZZT-TV studio. Shaiman's music in the opening sequence is not only true to the spirit of rock, it's scrupulously true to the era as well.

Tracy's supplications to her mom echo the hits of Neil Sedaka and Dion DiMucci. The riff behind Collins' song, "The Nicest Kids in Town," sounds exhumed note-for-note from "The Peppermint Twist," a 1961 hit for Joey Dee & the Starlighters. Tracy's catatonic reaction to discovering that she's treading the same sacred ground as her idolized Link, "I Can Hear the Bells," resonates with elements of The Drifters' "Dance With Me" and Sedaka's "Calendar Girl," hit singles from 1959 and 1961 respectively.

Hairspray even evokes the parochial feel of pre-Beatles rock, a concept that may seem totally alien to today's iPod generation. While the synthetic "Legend of Miss Baltimore Crabs," sung by bigoted WZZT producer Velma Von Tussle, is a somewhat strained effort from Shaiman, he also imports "The Madison" from the original Hairspray film by John Waters. A dance craze that blossomed in 1959-60, The Madison is as purely Baltimore as Francis Scott Key and Babe Ruth.

So is the integration of The Buddy Deane Show on WJZ-TV, the true-life story Waters built his screenplay on. When Tracy shows up at the thinly fictionalized WZZT, she's the wrong body type and pedigree to get past the vile and vigilant Velma. So she takes a circuitous route. First she lands in detention at Patterson Park High School and picks up some groovy moves from Seaweed Stubbs, the boss dancer on "Negro Day," a monthly fixture on Corny's show. Then she stands out at the school hop, where Corny calls up The Madison.

The whole show zooms into another gear just as Tracy experiences the apotheosis she dreamed of — her first day as one of Corny's elite Council Members. Standing on the podium with the demigod DJ and a broadcast microphone thrust in her face for the first time, Tracy reacts with fatal spontaneity when asked to reveal her fondest wish.

Our adorable blob wishes every day were "Negro Day." Sacrilege! Particularly scandalized are Velma and the show's sponsor, Harriman Spritzer. He's the man who manufactures Ultra Clutch hairspray, the quick-drying mortar that makes the monumental hairdos of the 60s possible.

Even as we cross over from the syrupy goo of teenage crushes into the fearsome frontier of the Civil Rights Movement, the creative team members of Hairspray don't lose their teenybopper bearings. While she's agitating for an integrated dance floor, Tracy is battling Velma's perfectly coiffed daughter Amber for the title of Miss Hairspray — and for the heart and soul of Link.

Want more plot strands? Penny falls for Seaweed, inflaming her mother's racial bias, and we root for Tracy's big mama Edna to permanently break away from her ironing board and pincurlers so she can strive for her dream.

Tracy's crusade dominates the plot, yet it doesn't annihilate the humbler, more sentimental storylines. The book by Mark O'Donnell and Thomas Meehan keeps it light. Beholding the depths of Amber's patrician treachery, Tracy bellows, "You have acne of the soul!"

On Broadway when I saw this show, the magisterial presence of Harvey Fierstein as Edna Turnblad ruled so decisively that I wondered how well it could weather his departure. The touring version of Hairspray triumphantly affirms its sturdiness. In some key respects, it's better than the Broadway edition I reviewed in December 2003.

By the time I saw the show, Tony Award winner Marissa Jaret Winokur had departed. To be blunt, with Keala Settle as Tracy in the touring version, the blubber is back! With her, much of the heart of Hairspray is stronger here during those long stretches when Edna awaits offstage. Settle's dancing and singing are all the more infectious for the extra weight she tosses around.

While J.P. Dougherty doesn't toss off Edna with quite the bravura of Fierstein, he obviously observed the master closely during his Broadway stint understudying the role. You certainly won't feel shortchanged in "Timeless to Me," a showstopping geriatric duet with husband Wilbur (Stephen DeRosa). Similarly, Serge Kushnier seems to have profited from his time in the Broadway company, giving a pitch-perfect rendition of Link.

Unfortunately, Link's inner struggle doesn't seem as difficult with Worth Williams dumbing down the role of Amber and discarding her steely spitefulness. But I'll take gum-popping Chandra Lee Schwartz's ditzy take on Penny over the understudy I saw on Broadway.

The rest of the cast comfortably hold their own against their Broadway counterparts. On the oppressed side of town, Alan Mingo as Seaweed and Charlotte Crossley as evangelistic deejay Motormouth Maybelle superbly personify that chocolate flavoring missing from Corny's program.

William Ivey Long's award-winning costumes lose none of their crass brilliance, topped by Paul Huntley's stupendous wigs and hair. Outré design, bubblegum sensibility and social revolution all come together as the ensemble sing their final "You Can't Stop the Beat."

It's all as irresistible as the tide of history that Hairspray celebrates.