Dances with Wolves, Raging Bull and The Social Network among new releases | View from the Couch | Creative Loafing Charlotte
Switch to the mobile version of this page.

Dances with Wolves, Raging Bull and The Social Network among new releases

What's new on DVD and Blu-ray

DANCES WITH WOLVES (1990). Forever known (and, in some circles, vilified) as The Movie That Unfairly Beat GoodFellas For The Best Picture Oscar, Kevin Costner's commercial and critical smash has seen its reputation diminish over the ensuing years — an unfortunate development for a truly exemplary motion picture. Still, even at three hours, the theatrical cut seemed incomplete, with some unexplained plot points and truncated character development. This four-hour version, which first saw the light of day on video back in 1994 and was then released on DVD in 2003 and now on Blu-ray, is the real deal, a gorgeous, masterful production that deserves to endure as an American classic. In addition to making an impressive directorial debut, Costner stars as John Dunbar, a Union officer who volunteers for a frontier assignment; while serving solo duty at the post, he becomes acquainted with the members of a neighboring Sioux tribe and eventually finds himself integrated into their society. The strengths of the original cut are still intact, but what makes this expanded edition truly soar is how well it develops the relationships between Costner and Mary McDonnell (as a white woman raised by the Sioux) and especially Costner and Graham Greene (marvelous as the tribe's holy man). 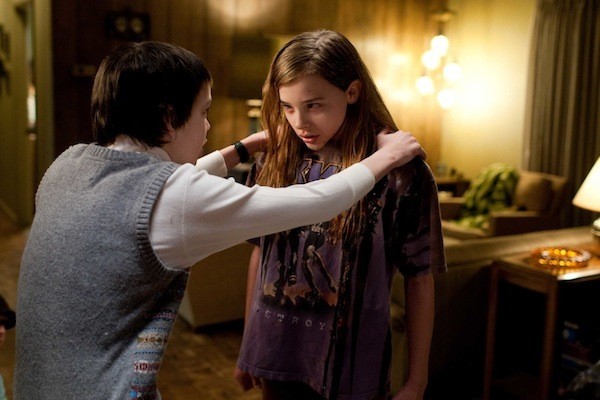 LET ME IN (2010). The world needed an immediate remake of Sweden's 2008 Let the Right One In about as much as it needed another vampire flick in general, yet the good news is that Let Me In can hardly be construed as a shoddy, cash-in-quick product. Crafted with extreme care by writer-director Matt Reeves (Cloverfield), this is that rare retelling that pays the utmost respect to its predecessor — I'd be hard-pressed to single out even one frame that cheapens the memory of the original. As before, the setting is an apartment complex in a frozen environment (here, Los Alamos, NM), where lonely young Owen (The Road's Kodi Smit-McPhee) notices he has a new neighbor in the form of Abby (Chloe Grace Moretz of Kick-Ass). Picked on by bullies and exhibiting some disturbing character traits himself, Owen is happy to become friends with this strange girl who doesn't like candy and can only hang out with him at night. Reeves largely sticks close to the look and tone of the first film, but not in the annoying manner of Gus Van Sant's atrocious Psycho remake. While his slight altercations result in a picture not quite as powerful as its predecessor (particularly during the climax, a mesmerizing piece of filmmaking in the '08 take), he's to be commended for creating a film that ably stands on its own. 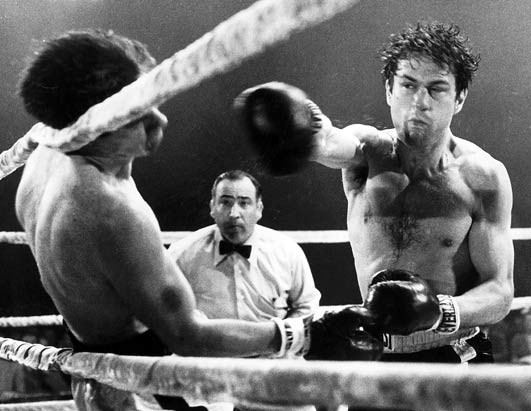 RAGING BULL (1980). Was Raging Bull really the best movie of its decade? According to Roger Ebert, the late Gene Siskel, USA Today's Mike Clark, and an American Film magazine poll of 54 influential US critics, the answer is yes. But whether it's ranked No. 1 or No. 2 or even No. 200, it's clear that Martin Scorsese's pugilist pic is a towering achievement, a mesmerizing film that, like Million Dollar Baby, refuses to be pigeonholed as merely a "boxing movie." Decidedly unsentimental in every respect, Raging Bull offers a searing character study of Jake La Motta, the middleweight boxing champion who was as much of a brute outside the ring as he was inside it. Robert De Niro, in a superb performance that earned him the Best Actor Oscar, plays La Motta throughout his adult life, famously going from a fighting physique to portray the boxer in his heyday to gaining 60 pounds to play him after his glory days were long over. It's a startling transformation, but the true power of De Niro's performance rests in his ability to worm his way into this lug's twisted psyche and air out his personal demons for all to see. Scorsese's meticulous direction (you'd never know he had no interest in boxing when first tackling this project), the brilliant screenplay by Paul Schrader and Mardik Martin (adapted from La Motta's autobiography), Thelma Schoonmaker's Oscar-winning editing and Michael Chapman's black-and-white cinematography all deserve kudos; ditto for the superlative turns by novice actors Joe Pesci (as Jake's supportive brother) and Cathy Moriarty (as his long-suffering wife).

THE SOCIAL NETWORK (2010). Like the screwball comedies and film noir staples of yore, The Social Network exhibits an extraordinary gift for gab. Words fly like machine gun strafes, and arguments generally end with the more verbally adroit speaker standing over the other person like a wave that's managed to tumble a surfer. If screenwriting was considered a sport, Aaron Sorkin's script wouldn't just be competing for movie awards but for Olympic gold as well. One of the best films of the year, this is the fascinating story of how Harvard nerd Mark Zuckerberg (Jesse Eisenberg) created Facebook and in the process became the world's youngest billionaire. Yet this isn't an inspiring movie about an underdog beating the odds as much as it's a prickly mishmash of how one person's insecurities led to material gains even as his personality remained stuck in an arrogant, off-putting zone. Director David Fincher keeps the proceedings moving at a rapid clip, a task made easier by Sorkin's breezy, biting dialogue and great performances by the entire cast. But a quick pace isn't the same as a hurried one, and The Social Network takes its time in showing how one loner was able to unite 500 million friends, even as he remained perpetually hidden on the other side of the cold, glaring screen.

Blu-ray extras include audio commentary by Fincher; separate audio commentary by Sorkin and the cast; a 93-minute making-of feature; an 8-minute piece in which Fincher and cinematographer Jeff Cronenweth discuss the film's visuals; a 19-minute featurette in which Fincher and composers Trent Reznor and Atticus Ross talk about the score; and an interactive multi-angle scene breakdown.