Reviews of Saturday Night Fever and 5 Lesbians Eating A Quiche

The Bee Gees lose their falsettos 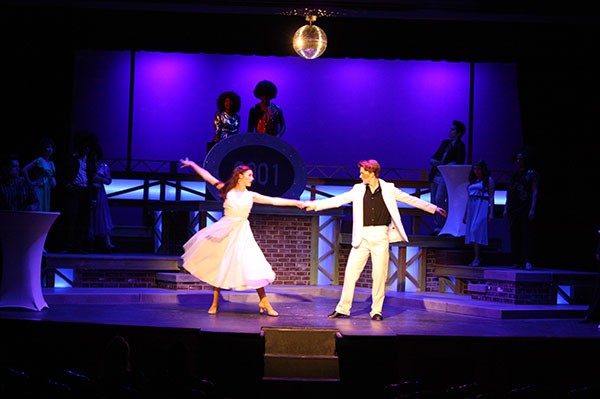 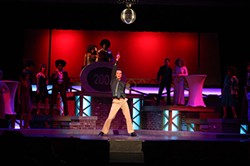 John Travolta at his peak: has there ever been anyone like him? The ruggedness, the grace, the strut, the conceit, and the boyish charisma — all of these studmuffin assets uniquely tinged with a robust Brooklynese vulgarity that took America by storm from the moment Welcome Back, Kotter hit the airwaves in 1975. But the full bloom of Travolta-mania didn't happen until 1977, when Saturday Night Fever hit the big screen.

Surely the music of the Bee Gees was a prime component in the mystique of that breakthrough film. Yet the Bee Gees' film score underpinning Travolta's disco exploits was exquisitely subordinated to the heart of Tony Manero's halting, confusing, and sometimes comical progress toward manhood in Norman Wexler's screenplay. Bring the song hits more to the fore, as the Broadway musical version of 1999 attempted to do, and the narrow emotional range of disco is cruelly exposed.

"More Than a Woman" is unquestionably less than a woman to me, "Tragedy" is barely morose, and the answer to "How Deep Is Your Love?" is not very deep at all. I'd say that the Gibbs Brothers chose wisely in never attempting to write music for the Broadway stage.

We can only guess why director Ron Law, kicking off Theatre Charlotte's 89th season, passed on the original Broadway adaptation by Nan Knighton in favor of a newer 2015 adaptation by Sean Cercone and David Abbinanti that has never been on Broadway — or even a national tour. Either way, Law faced an uphill battle with his core of teenage performers.

After playing the somewhat delicate boy protagonist in Caroline, or Change earlier this year in the Theatre Charlotte lobby, Rixey Terry attempts a huge leap forward from that concert production in tackling the iconic Travolta role of Tony. While the welter of tunes launched at us — the worst are those newly penned by Abbinanti — dilute the impact of the drama, they don't obscure the complexity of Tony's character or his double lives.

By day, Tony works a dead-end job at a Brooklyn paint store, coming home to parents who adulate his older brother Frank, a priest, while belittling his talents. A huge chunk of Tony's paint store paycheck — and some elaborate rehearsals and primping rituals — go into Saturday nights, when he reigns as king of the dance floor at the 2001 Odyssey club. Local girls long to be his partner, thrilling to the privilege of even mopping his brow after a dance.

So at work and at home, Tony is meek, querulous, and downtrodden, but out on the street or at the club among his friends and admirers, he's self-absorbed, arrogant, and cruel. He ignores and snaps at his good friend Bobby, who leans on him for advice, and he forcefully rejects all advances from Annette, the best dancing partner in the neighborhood.

From the moment he first sees Stephanie Mangano at the club, Tony's world turns upside-down. Classically trained, Stephanie's moves are easily a match for Tony's — and her savoir-faire is miles ahead. She has a job in Manhattan! Suddenly, Tony is the supplicant and the pursuer, hoping Stephanie will be his partner for an upcoming prize competition. Yeah, the story has been slightly altered.

Terry wraps his arms around the meek, downtrodden, and needy aspects of Tony a lot more readily than his imperial arrogance. Terry's ordinariness carries over to Tony's first few turns on the dance floor, where he just doesn't look masterful. So the true turning point on opening night last week came when we reached Terry's solo on "You Should Be Dancing" at the end of Act 1. Adding acrobatic break dancing moves never seen in the iconic film, choreographer Lisa Blanton unleashed the beast in Terry.

In less than a minute, Rixey proved that, even among triple-threats, he possesses unique gifts.

Whether or not Stephanie is intended to have more confidence and dancing polish than Tony, Susannah Upchurch definitely brings it. The way things are between Tony and his groupies doesn't always come off precisely as they should, but when Upchurch is around, Tony's shortcomings and vulnerabilities snap sharply into focus. Her Stephanie is almost unattainable, not quite.

Meanwhile Ava Smith is acting up a frenetic whirlwind as Annette, almost convincing us that Tony is the dreamboat we never quite see. Vic Sayegh and Mara Rosenberg make Tony's parents a rather squalid couple, contributing mightily to the Brooklyn ambiance, and Jay Masanotti brings out all of the older brother's cryptic contradictions.

The fabled three-piece suit from the film isn't quite equaled by costume designer Jamey Varnadore, whose budget was likely too strict for all the clotheshorses and wannabes he's called upon to outfit. Zachary Tarlton leads a tight five-piece band, but the real heat is mostly generated by Blanton's choreography — and Dani Burke's solos as Candy, the 2001 chanteuse. Burke's "Dance Inferno," not a Bee Gees song, is the chief showstopper among the vocals. With so many three-part harmonies discarded, it's hard to pick a lowlight among the songs that the Gibbs Brothers made famous. Not one falsetto all evening long!

I'll go with "Stayin' Alive" as the nadir. For decades, I've despaired of explaining how tone-deaf most renditions of "If I Were a Rich Man" sound to Yiddish-speaking Jews when Christian singers navigate the vocalise, non-verbal sections of the lyrics. Now I can finally point to an equivalent.

At first, I could hardly believe how over-the-top director Sarah Provencal was wanting her cast to act in 5 Lesbians Eating a Quiche, currently at the Warehouse Performing Arts Center in Cornelius. This was the customarily sophisticated Lane Morris as Wren, one of our five quiche bake-off hostesses? The effusive audience interaction, from the time we enter the Westmoreland Road storefront, makes Pump Boys and Dinettes seem funereal by comparison.

But after a while we realize just how strange this script by Evan Linder and Andrew Hobgood truly is. For this egg-worshipping black comedy takes us back to a 1950s dystopia in an alternate universe. Only the desperation of our hostesses' plight can prod them into coming proudly out of the closet, a delicious juxtaposition with their '50s primness.

Actually, Morris with her "victory curls" looks more like a throwback to the '40s and the Andrews Sisters (yes, these Daughters of Susan B. Anthony and Gertrude Stein have a club song). It's Joanna Gerdy as Vern who's the outright lesbian of this quiche quintet from the start, flinging away her customary sophistication even further from the norm in a comedy performance to relish.

Ginny, played by Stephanie DiPaolo, is a diffident Brit who almost seems catatonic at times. Vying with her for the distinction of being the most repressed in the house is Nikki Stepanek as Dale, who hasn't spoken to a man since the age of three. She's definitely the youngest, which is why she becomes the chosen vessel — for a while, anyway — to save mankind.

Every one of us in the audience must come out and admit that, yes, we are also lesbians, a quite unique moment in the annals of theatre. The only remaining holdout is Pam Coble Coffman as club president Lulie, a veritable Betty Crocker of propriety and discipline. Lulie hits us with the startling revelation that sends this 73-minute production into its unnecessary break. My wife Sue balked at this intermission, but the folks taking hits from the boxes of wine on the buffet seemed to be okay with it.