Rich Man, Poor Man among new DVD releases | View from the Couch | Creative Loafing Charlotte
Switch to the mobile version of this page. 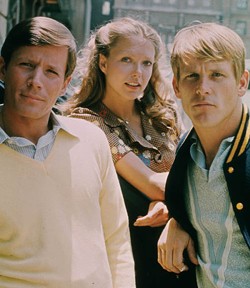 THE BLACK CAULDRON (1985) / BEAUTY AND THE BEAST (1991). After years of middling animated fare that failed to match Walt Disney Pictures' earlier classics — let's face it, the likes of Robin Hood and The Aristocats can hardly compare to such masterpieces as Pinocchio and Lady and the Tramp — The Black Cauldron was primed as the picture that would restore the studio's toon luster. Costing a hefty amount and taking years to create, the film had the distinction of being one of the first animated features to employ any computer effects as well as the first Disney toon flick to be rated PG (in fact, it had to be heavily edited to avoid a PG-13 or even an R). But when it was released during the summer of 1985 (when most audiences were heading Back to the Future), the film proved to be a flop, and the company didn't even bother releasing it on video until 1998. Based on Lloyd Alexander's book series The Chronicles of Prydain, the film actually displays that spunky Star Wars spirit, with sizable dollops of Lord of the Rings ambiance thrown in for good measure. The hero is young Taran, an assistant pig keeper who's aided by (among others) a plucky princess and an annoying sidekick in his quest to prevent the evil Horned King (voiced by John Hurt) from possessing the title object for his own nefarious purposes. The Horned King makes for a memorable villain, but his presence is undermined by the dull-as-dirt protagonists; the rest of the film exhibits a similar tug-of-war between interesting graphics and uninvolving scenarios.

It wasn't until 1989 — and the release of The Little Mermaid — that the studio was able to resurrect its fortunes and spearhead a new renaissance in animation. This was especially evident with their next release, the superb Beauty and the Beast. The first (and, until Up, only) animated film to earn a Best Picture Oscar nomination, this is as good as anything ever produced by the studio — beautifully drawn and lavishly scored (it earned Oscars for Best Original Score and Best Original Song), it's an enchanting rendition of the timeless fairy tale about a cursed prince whose beastly visage can only be dissolved by the love of a woman. Belle (Paige O'Hara) remains one of the great heroines of modern cinema; Lumiere (Jerry Orbach) and Cogsworth (David Ogden Stiers) prove to be a great comedic duo; and I never grow tired of watching the boorish Gaston (Richard White) swagger across the screen.

DVD extras on The Black Cauldron include a deleted scene; two games; and a vintage Donald Duck cartoon. DVD extras in the Beauty and the Beast Blu-ray/DVD combo pack (which is what was sent for review; the DVD-only edition doesn't come out until November 23) include three versions of the film (the original, a version with a deleted musical sequence integrated back into the film, and the storyboard version); audio commentary by composer Alan Menken, producer Don Hahn, and co-directors Gary Trousdale and Kirk Wise; and a sing-along mode.

THE DARJEELING LIMITED (2007). The Darjeeling Limited is writer-director Wes Anderson's most wispish work to date, a road movie in which the road is made of railroad tracks. Carrying over the thematic baggage of most of his other efforts, this one also concerns itself with familiar discord — here, Francis (Owen Wilson) invites his younger brothers Peter (Adrien Brody) and Jack (Jason Schwartzman) to India to join him on a spiritual quest. They travel mainly aboard the train The Darjeeling Limited, attempting to communicate (but often just miscommunicating) with each other as they reflect on their lives. Anderson regular Bill Murray pops up at the beginning, and his shaggy-dog appearance sets the tone for the picture. Working from a script he co-wrote with Schwartzman and Roman Coppola, Anderson places the bros in various situations that, despite all the lip service given to spiritual journeys and moments of epiphany, never markedly change them. Their quest feels more like a jest, and even when they encounter death along the way, the three men remain too self-absorbed to fully respond to it. The Darjeeling Limited is a mixed bag of a movie, with some exquisite camera shots and a few clever exchanges not quite enough to overtake the tale's slenderness or the limitations of the three leading characters. But it still offers enough in the way of mild charms to earn it a soft recommendation.

Extras in the two-disc DVD set include audio commentary by Anderson, Schwartzman and Coppola; one deleted and two alternate sequences; a 40-minute behind-the-scenes piece; a discussion between Anderson and filmmaker James Ivory (Howards End) about the film's music; and Anderson's American Express commercial.

RICH MAN, POOR MAN: THE COMPLETE COLLECTION (1976). As Tim Brooks and Earle Marsh once noted in their invaluable book The Complete Directory to Prime Time Network TV Shows, "If it had not been overshadowed so quickly by Roots, Rich Man, Poor Man would probably be ranked today as the biggest dramatic spectacular in the history of television." Even with the Alex Haley phenomenon appearing a mere 12 months later, the impact of this adaptation of Irwin Shaw's best-selling novel cannot be understated; for starters, it's acknowledged as television's first miniseries, or at least the one that led to the format's rampant popularity for years — even decades — to follow. Those of us anxious to revisit it for the first time in ages have wondered why it was taking forever to reach DVD, but here it is finally. The original eight episodes (split up on the discs as 12 episodes) focus on "good son" Rudy Jordache (Peter Strauss) and "bad son" Tom Jordache (Nick Nolte), and how their lives are shaped and changed over the 20-odd years of their adult lives starting in the mid-1940s. Susan Blakeley co-stars as Rudy's lifelong love Julie Prescott, William Smith appears as the ruthless Falconetti (one of the decade's most memorable heavies), and a wide array of aged movie stars (Ray Milland, Dorothy McGuire, Van Johnson, etc.) and popular TV stars (including Robert Reed, Bill Bixby, and Ed Asner in an Emmy Award-winning performance as the Jordache boys' brutal dad) appear in supporting roles. A ratings bonanza — it was the second most-watched show that season, under All in the Family — the show picked up a whopping 23 Emmy nominations (but only winning four) and led to the release later that year of Rich Man, Poor Man: Book II. Running 21 episodes (separated as 23 on the DVD), this continues the saga of the Jordache clan, retaining some characters and cast members from the first series while adding some young blood (primarily Gregg Henry as Tom's son and James Carroll Jordan as Julie's son). Book II isn't quite as compelling as Book I — for starters, the absence of one of the first part's principal players takes it down a notch — but it still qualifies as must-see TV, now as much as back in the day.

The only extra in the nine-disc set is audio commentary on the first episode by Strauss and TV historian David Bianculli.