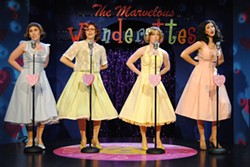 In the 1950s, girl groups were even deader than boy groups on the pop-rock scene, so it's little wonder that after the 1990 off-Broadway success of Forever Plaid, it took more than 18 years before their female counterparts, The Marvelous Wonderettes, set up camp in the Big Apple. When the Andrews Sisters had their last hit in 1951, the girl group desert for the remainder of the decade was divided between the Chordettes and the McGuire Sisters.

To flesh out the scarcity of material provided by the Eisenhower years, Wonderettes creator Roger Bean dips into the catalogues of '50s male recording artists Bobby Darin and the Everly Brothers. Then he thrusts Act 2 a full decade forward to 1968, when singing groups of both genders were in far greater abundance. And what a radical leap it is, between the Chordettes' "Lollipop" and the Shangri-Las' "Leader of the Pack"! With Billy Ensley directing a talented quartet, the current Actor's Theatre regional premiere is a lot of gum-popping fun.

Cindy Lou is the alpha slut of the Wonderettes when we first meet the group in 1958 at the Springfield High School prom. She has stolen Betty Jean's darling Donny from her without remorse — until 10 years later when Cindy seeks to heal the breach in their friendship. To be fair, Betty Jean behaves badly enough in response to Cindy Lou's betrayal that nearly equal regrets, apologies, and amends are warranted.

Both Suzy and Missy have man problems. Suzy is carrying a torch for an unresponsive Richie, who is purportedly sulking up in the light booth as Suze parks her gum on her microphone. In Act 2, she's carrying Richie's first child as she waddles onstage for the 10-year reunion. Missy's difficulties are more hit-related. Doris Day's "Secret Love" becomes a revelatory confession that Missy has a crush on Phys. Ed. teacher Mr. Lee, a hapless mid-life audience member who will never forget the Wonderettes. By the start of Act 2, Missy has been extensively physically educated by Mr. Lee without the closure of matrimony. So Missy and the Wonderettes gang up on Lee, repeatedly singing "Come on and marry me, Bill!" from the Fifth Dimension's famed "Wedding Bell Blues."

Ironic lampoon musicals have always been in the Actor's Theatre wheelhouse, so they predictably hit every design element out of the park: Rian Barbour's costumes, Chip Decker's set and Hallie Gray's lighting. Clunky choreography by Tod A. Kubo chimes with the pervading tackiness, and music director Ryan Deal contrives artfully to make every instrumental accompaniment in this jukebox musical sound limply canned.

Following up a string of triumphs in Xanadu and Chaps, Lauren Marlowe Segal makes the earliest splash here as Cindy Lou, predatory and shameless in Act 1, more worldly wise after intermission. Biggest surprise here is Michelle Fleshman-Cross as the pouting, vengeful Betty Jean, particularly when she lets loose on a couple of Connie Francis hits, "Stupid Cupid" and "Lipstick on Your Collar."

Virtually unrecognizable in eyeglass frames and flaming red wigs, Sarah Mack successfully revives Hollywood's secretarial clichè, tossing aside shyness and frumpiness as she comes on to Mr. Lee. As for Karen Christensen's stint as Suzy, it all pays off handsomely when she turns the ignition on Aretha Franklin's "Respect." That spontaneous combustion nicely summed it all up: For two hours, all four Wonderettes marvelously socked it to me.