Plus, Zoë's Kitchen bucks the recession 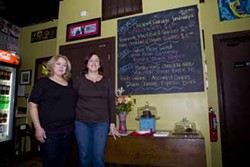 Last June, restaurateurs Lisa Burris and Lori Pearson opened Savor Café & Catering, which has operated just under the radar all summer. This may be attributed to the hours: Currently, Savor is strictly lunch. However, beginning Nov. 1, dinner service will be offered from Wednesday through Saturday.

Longtime friends Burris and Pearson rescued a space in the section of Morehead just beyond the I-77 overpass -- an area dominated with brick warehouses and a neighborhood both assessable and quaint. The business was conceived as exclusively catering, but as work progressed on the space, the partners decided to open the small 45-seat café. Savor operates in a brick building, a space added to the main building in the 1920s -- hence the faded advertisement on the back wall, which had once been an outside wall. Soon, the business will expand into the neighboring space. A dropped ceiling was removed to expose the aged wooden rafters and the floor is now stained. In effect, Burris and Pearson have achieved a look that many entrepreneurs pay big money to construct.

Burris, who has a culinary degree from Johnson & Wales University Charleston (where she was also hired as the Event Chef) and an M.B.A., has designed a focused menu imbued with Southern comfort foods. Meanwhile, Pearson, a self-taught pastry chef, contributes the dangerously addicting cakes and just-like-you-wished-Mom-had-baked bars on the dessert roster. (The pecan pie bar is sensational.)

Burris sources locally "as much as possible": The breads are from Pineville, the tomatoes from Lincolnton. Most dishes arrive at the table spot on. The Adam Bomb burger offers just the right amount of spark from the Cajun rub and the Pepper Jack cheese to stop you mid-sentence.

I'm not sure what to make of the Collards Soul Roll -- an eccentric Appalachian love child with vague Asian parentage. Better, though, is the pimento cheese dip with house-made crispy chips. Or you can forget the apps altogether and order the simply fabulous soups. Offered on a rotation basis, consider yourself lucky if you arrive on the day of the elegantly uncomplicated corn and ham chowder made densely flavorful with tender kernels, sweet ham and a glorious base.

Burris' artistry in flavors trumps the humble décor, and she displays her unrestrained vast culinary roots in the deceptively easy seared-salmon BLT, a taste cascade on focaccia. My only quibble with other sandwiches is the bread-to-filling ratio. The chicken salad -- passionately zapped with pesto -- is eclipsed by the monotonal effect of the mile-high multi-grain roll.

Pearson's desserts are wrapped and ready to go on a small table near the door. Take some back for your office mates, your boss, your lover -- send them to my office. They are sure to melt just about anyone's -- even a crusty critic's -- heart.

Zoë's Kitchen is a quick casual concept out of Birmingham which seems to have timed the market perfectly. General Manager Locke Provost said the company "hasn't missed a step" during the recession and has an aggressive store opening scheduled through the fourth quarter of this year. The second location in Charlotte will open Oct. 27 in Midtown.

Zoë's interior is brightly spiffed up with stripes of a family-friendly palate of green and orange. Orders are taken at the counter. Much of the appeal here is toward fresh -- which should not be confused with healthy, since fresh foods may or may not be health-conscious. Ordering too many slices of the "Ya Ya chocolate cake" or their oatmeal cookies can quickly challenge any low-calorie diet.

The menu has a Greek theme (the original restaurant in Birmingham, Ala., was created by Marcus and Zoë Cassimus in 1995). Some items are marked with a heart: sides of roasted vegetables, potato salad made without mayonnaise, a turkey pita sandwich with slaw.

Good is the grilled chicken kabob dinner ($9) and the inexpensive Greek side salad (only three bucks). The kids' menu features non-fried choices: grilled chicken fingers, cheese sandwiches, PB&J. But then these are accompanied by chips, perhaps offset by the complimentary orange wedge.

Take-home dinners for four and by the "tub" are also available.