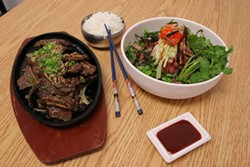 Rarely has America had such influence on a cuisine as it has on Korean cuisine. No, burgers, tacos, and apple pie are not the number one sellers in Seoul, but eating most dishes with a hit of a chili paste, gochujang, is. The capsicum pepper, native to America, was only introduced into Korean cuisine in the 18th century, but its impact is still tasted daily. The paste, which is served in bowls, is spooned on most dishes morning to night.

Korean cuisine seems to have one of the last unexplored Asian categories. Most food lovers are proficient with Thai curries, Indian samosas and Vietnamese pho. We can chow down on Malaysian beef rendang and Chinese tangerine chicken, and can place ourselves in the hand of a talented Itamae (sushi chef) at a Japanese sushi bar. But Korean?

In Charlotte, Korean food used to be easy to find. For a decade or so, Seoul Restaurant and Koryo Gardens were humming. Now Korean food has been relegated to a tiny Sino-Korean spot on Albemarle Road and a bare bones eatery in the back of PePeRo Oriental Foods, a large Korean grocery store on Monroe Road in Matthews.

Hwi Won and Okron Yoo, PePeRo's owners from Seoul and Busan respectively, had a smaller Korean grocery store for nine years before opening this full-scale operation in January 2005. The Yoos' store specializes in Korean, Japanese and Chinese items. Peruse the aisles and you'll find eight pound jars of kim chee, dozens of kinds of frozen dumplings, half dozen kinds of salt (some in 10-pound bags) and a freezer full of whole frozen fish. There's fresh Asian produce and baked potato crackers as well as housewares, toiletries, and linens.

In July 2005, the Yoos opened the prepared food component, PePeRo, in an area off to the right of the side entrance. The dining area is divided into two parts. One side, exclusively for dining, is a white room without much décor and dotted with functional tables. The other section has the ordering/take out station which opens into the large kitchen. A few tables are also available, as well as a water cooler, which is available to diners. Helpful are the large full-color pictures above the ordering station. Names of the dishes are in both Korean and English -- although some signs are in Korean exclusively. Tables are set with chopsticks and a long-handled shallow spoon (sutgarak) for rice and soup.

PePeRo is not a full-scale restaurant with a bevy of servers and brimming with atmosphere. Nor will you find built-in grills at the tables. This is a bare bones shop, but one of the only opportunities for Korean cuisine in town.

Before chilies were introduced into Korean cuisine, pickled vegetables spiced up the dishes. The most famous Korean pickling is kim chee, which has been commonly found in local mainstream grocery stores for a decade or more.

Kim chee is cabbage and onions preserved in a solution of ginger, salt, red chilies, and garlic. Some recipes include daikon radishes; some are sweetened with honey or sugar. This balance of flavors -- salty, spicy, sweet, bitter and sour -- is what makes kim chee the ubiquitous condiment that it is. Kim chee has more zing according to season, with the spiciest making its appearance in winter. While it's true that before refrigeration kim chee crocks were buried during the winter to prevent freezing, today many Koreans set out preserving crocks of kim chee the same way some southerners set out sun tea pots.

Most of the dinner entrées at PePeRo are served with side dishes which include kim chee, pickled white radish, slices of a stuffed vegetable roll, and pickled vegetables in chili paste.

Most dinners begin with a complimentary bowl of miso soup. Soups, in fact, are a major component of PePeRo's menu with 17 listed and more for specials. Some soups are prepared for two, another common element of the menu. Evelyn Yoo, daughter of the owner, reported that most of the steamed "casserole" dishes are prepared for a group and that serving foods communally, or family style, is common. Prices for these dishes range from $20-$25, which single entrées range from $9 to $22.

The feisty Bul Go Gi, or barbecue beef, makes a laid back appearance: Charbroiled thinly sliced marinated beef tasting of soy and garlic sat astride white rice. Better, though, was the marvelous Hwe Dup Bob which turns out to be a deconstructed sushi roll. Layered at the bottom of the large bowl was sticky rice, then chopped lettuce and thin strands of Japanese cucumber. Mounded on these were colorful cubes of red tuna, light pink snapper, and, well, salmon-colored salmon. Then petite ribbons of nori laced the summit, spiked with orange masago (roe) and a hint of sesame oil. Delightful.

"Put more sauce," our server insisted, pointing to the red chili paste. Korean chili paste does not deliver the wow of wasabi but does have a heat factor. With Korean cuisine, the diner decides the heat level, albeit with prompting from the server, not the kitchen.

The downside at PePeRo is the glaring B inspection rating given last June. A broken dishwasher was one reason cited. Yoo said her parents had opted not to have a re-inspection since inspections are done every three months. Yoo said the problems are fixed and they anticipate returning to an "A" rating this month.