Two illuminating exhibits at the Mint 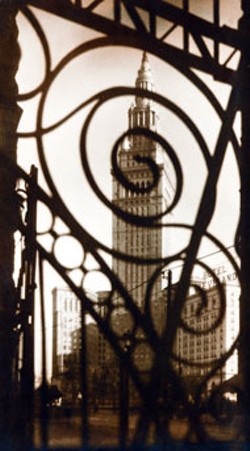 Margaret Bourke-White was a pushy woman in a patriarchal America. Through her splendid and powerful photographs, she showed her country the bright side of its industrialized self. In the midst of America's worst depression, Bourke-White delivered silver gelatin hope and early reflections of the genesis of what became the most powerful industrialized country in history. While millions focused on soup lines, she turned her lens, and our eyes, toward assembly lines.

Margaret Bourke-White: The Photography of Design, 1927-1936 is showing at the Mint Museum, along with the companion show Through the Eye of the Camera: 19th and 20th Century Photography from the Royal & SunAlliance Collection. The Bourke-White show illustrates an early 20th century promise for a better future through industrialization. Through the Eye of the Camera shows the potency photography offered beyond its simple initial use as mere documentation.

Margaret Bourke-White's photographs are proof positive of her country's early lurches toward greatness in a time when America was floundering. Her photographic spin on America's future came through images of luminous foundries, towering dams and fiery foundries. She helped give credence to the shaky promise of progress in early 30s America. She unfurled the banner of mechanized redemption for a slouched and shuffling populous. With her camera, she delivered a stylized and elegant message to the masses, a tangible hope in the form of images of industrialization, national brilliance in black and white.

Between 1927 and 1936, White developed a body of work that progressed from a moody machine aesthetic to a more precise, controlled and stylized expression of Machine Chic.

"Smokestacks and Coal," 1928, could be a propaganda still from a silent film bemoaning the subjugation of the Earth by the Machine. Or, more likely, simply a photograph illuminating one mechanism making America great. Whatever its message, the towering vertical smoke stacks, laced together by black lattice work of steel trusses shrouded in a billowing and diaphanous shroud of smoke, is graphically beautiful.

In 1928, women were denied access to steel mills. Bourke-White met with the president of the mill. Her interaction with this titan of industry serves as a clear example of how she addressed difficulties facing America's man-culture. Her recollection also reflects her savvy talent for self-promotion: "I remember standing there by his massive carved desk, trying to tell him of my belief that there is power and vitality in industry that makes it magnificent for photography, that it reflects the age in which we live, that the steel mills are the very heart of industry with the most drama, the most beauty -- and that was why I wanted to capture the spirit of steel making in photographs."

What a great front man she was. He granted her unrestrictive access to Otis Steel.

"Gears," 1929, from the Chrysler factory, is a picture of a man dwarfed by massive gears looming over his head. Like many of the photos that include workmen, the humans looked posed and distanced by the photographer, and diminished by the machines they run. The real subject matter -- machines -- is unmistakable. In size, posture and facial expression, the workmen are reduced to adjuncts, sometimes irritating organic interlopers, ingratiating themselves within the stark mechanical beauty of the pulleys, gears, winches, hooks and cables.

Bourke-White's chronicles of industrial America are most beautifully rendered in her pictures of multiples -- the bundled products of automation. Piano keys, thread spools, soup cans, bottles, spoons, steel pails and bananas all assume an elevated and abstract status under the artist's watch. Using designed arrangements, repetition and the manipulation of light, Bourke-White makes tinned and bundled tamales look like an intriguing abstract painting.

"Mail Order Department," 1934, is two vertical lines of desks separated by a conveyer belt. The conveyer belt, piled with catalog orders, splits the photograph through the center, with desks left and right following the ascending conveyer to the unseen horizon line. Women man the desks; we see them from the back looking down at their processing orders. It's clean and well lit; things are getting done. The machine hums. Rightness, order and clarity. Bourke-White machines the human and makes the inexorably mundane appear palatable. More than palatable -- appealing!

In 1936, Life Magazine graced the cover of their inaugural issue with Bourke-White's photograph "Fort Peck Dam," an image of a WPA construction project in the pop-up town of New Deal, Montana. Mammoth, bulging concrete towers rise from the dry riverbed to curved capped pylons silhouetted against the sky. Tiny men at the tower's base illustrate the structure's impossible scale. Again, it is an abstract beauty -- totemic, grand and powerful.

Inside the magazine were more images by the photographer depicting life in the town of New Deal under the lead article titled "Franklin Roosevelt's Wild West."

Bourke-White's photographs of couples dancing and patrons at a bar did not come close to the majesty of the front cover, but did signal a change of course for her future in photography. Human subjects with stories -- Louisville's flood of 1937, the German bombing of Moscow, small town life in the Midwest -- largely replaced her dance with the machine. She didn't abandon her romance with aesthetics, she just gave it a human face.

Margaret Bourke-White's American future was a beautiful baby, a man-made marvel of engineering and grit, luminous with promise. She helped create belief in the Age of the Machine, a beautiful black and white promise as reassuring as FDR's voice on the radio. Come walk through an old American dream of mechanized productive order and designed hope. It's great to have lived long enough to be able to view the thrill of the new as quaint.

Margaret Bourke-White is not the only photographer in town. Steiglitz, Muybridge, Arbus and Mapplethorpe are also at the Mint. Through the Eye of the Camera is a family album featuring some of the best American photographers in the last 150 years. Through the largess of Royal & SunAlliance (and the wiles of Mint director Phil Kline), Charlotte is graced with a show that illustrates the range of expression possible in the photographic arts. So much can be done with a camera -- it all depends who's behind it.

George Bernard's photograph of Charleston is why the name William Tecumseh Sherman is still uttered with a sneer down here. "Charleston After the Siege" is a blunt and brutal portrait of a city destroyed with severe prejudice. The dust and rubble show the footsteps of malevolent and ruthless boys pretending to be men. It looks like Dresden 1945, only with fewer buildings standing.

"Winter Sunrise, Sierra Nevada," 1945, by Ansel Adams is here. Jagged and brilliant white peaks soar above and behind a wave of black rolling hills. Trees run in a line across a pasture. You'll never see this with your naked eyes, you need the theater of Ansel to make an image burn this brightly.

Diane Arbus is a personal favorite. She taught us how really odd we are. "Boy With Straw Hat Waiting to March in a Pro-War Parade, N.Y.C.," 1967, pictures a young man, doe-eyed and bow-tied, serene, stoic, stony and hopeless. He appears to have been dressed by his father who is a 19th century barber. His lapel button says "BOMB HANOI." His Sunday coat is wrinkled and too big for his bony frame. You just want to hug him but you know he'll bite.

Alfred Steiglitz made harshness beautiful. In "Two Flowers, NY," 1913, Madison Square Garden and the Met Life Insurance buildings rise behind low black buildings into a chalky winter sky. In the foreground is a small frozen branch, puffy with snow. The branch is achingly fragile. The unarticulated buildings in the background appear powerful, but ethereal, fading in the mist. You get the impression the branch will outlast the buildings. Alfred Steiglitz hits a target on your chest you didn't know was there.

The Mint delivers a bite-sized primer on the early infusion of art into the then young science of image reproduction. More importantly for Charlotte, the show represents another quiet rise in the recent ascent of the Mint Museum, which never blows the horn of World Class, but keeps a blunt and steady eye on the prize.