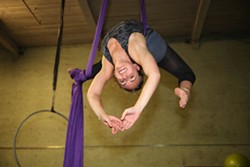 Maggie Kingsley is wrapped in silk, suspended 20 feet in the air, when suddenly her body hurtles toward the ground. She spins, twists and tumbles as the silk unravels around her. In the blink of an eye, the silk tightens and she is again suspended in mid-air.

This isn't someone being hanged for a movie. It's the act of an aerial artist combining fitness with art.

As a single spotlight shines on Kingsley from below, the 23-year-old former Florida State gymnast makes her way back up the two dangling strips of silk stretching to the ceiling. She wraps her feet and bends forward until she is upside down, the silk draping from her arms like wings. After a brief pause, she unravels herself and slides safely to the ground.

While she continues near the stage at Chop Shop in NoDa, bands perform for the October Pup Crawl benefit. Kingsley's drops, poses and performance add an extra visual element to the music.

Circus or Cirque du Soleil-like performances have made their way into local gyms and clubs over the last decade. As a member of the Queen City Aerial Artists, Kingsley is just one of several performers introducing the aerial arts to Charlotte. Tara Riley, who founded the QCAA last year, is a weekly performer at Mez at the EpiCentre, where her fit, 5-foot-4-inch tattooed frame dangles from silks even higher in the air — a full 50 feet.

Riley has done her research on aerial arts. "It started in Asia more than 2,500 years ago — it's always been a performance thing," she says. "I think it should be viewed as a sport — just like dance is a sport. Circus performers are definitely athletes, too. In the last 10 years, it has become a form of fitness. Charlotte is just a little late to the game."

Riley began practicing aerial arts about two-and-a-half years ago and formed the QCAA in 2010 with the support of her husband and mother-in-law. Riley was working at an Apple store when a co-worker showed her some photos of his daughter at an Asheville aerialist workshop. While aerialists intrigued her, it wasn't something she pursued. But when her co-worker became ill, Riley realized life is too short to put off any dreams or goals.

"I always did the 'if onlys' — if only I was younger, if only I was thinner, if only I had more time," Riley, who is 37, says. "I really just wanted a challenge, but didn't think the opportunity was there until I went searching for it." She found opportunities to become an aerialist through Asheville Aerial Arts and Charlotte's Caroline Calouche & Co.

While searching for a place where she could hang silks to practice, Riley found NoDa's Ultimate Gym, where the ceilings are 20 feet high. The owner suggested that she teach classes in aerials. Queen City Aerial Arts — a name under which she could teach and perform — was born.

Riley, already a certified pilates instructor, now focuses on aerialists. Her students practice in a corner of the 30,000-square-foot cement-and-brick gym, which she calls "raw" because of its proximity to a practice ring where boxers spar and bells are ringing every three minutes. The smell of sweat hangs in the air as petite women work their acrobatics in the same room as MMA fighters throwing punches and kicks and jumping rope.

Riley's QCAA classes are affiliated with the gym and its membership requirements. Students can take walk-ins for $20, while monthly memberships average out to roughly $12 per session.

Another aerialist group in town, Caroline Calouche & Co., is a dance-based organization that incorporates aerials into plays such as The Nutcracker. It offers single classes for $15 in addition to monthly and semester packages.

"Most of the people in the company have dancing backgrounds, which makes it easier to blend our aerial and contemporary style," Calouche, who has been teaching aerials since 2008, says. "We learn the skills just like a circus artist, but we really try and blend it into dance or the theme of a show so it's not trick after trick."

Where Caroline Calouche & Co. performances center on dance and storytelling, QCAA takes more of a fringe approach -- performing in bars and at events around town.

While Riley was getting started at the Ultimate Gym, Jay Tilyard was working on opening the music venue Chop Shop next door. The two joked that the Chop Shop would be the first place she would perform. It wasn't a joke for long. QCAA has now been a part of various events there since it opened in July.

Riley never thought much about taking the act to larger venues with much taller ceilings. But when one of her former students, Jessica Baroth, sought out a performing gig at Mez, it peaked Riley's interest. When Baroth moved to Las Vegas to do aerials full time, Riley took over the Mez gig. "Every time I go up, there's someone waiting when I come down to tell me how amazing it was," she says. "You can make drops look really big and scare the heck out of the crowd, which is fun."